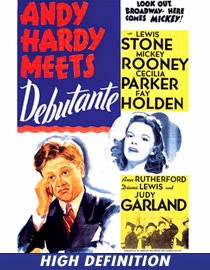 This installment of the popular Andy Hardy series takes the Hardy family out of idyllic Carvel and sends them off to New York City, where teenage Andy promptly gets himself into all kinds of trouble. Despite the change of venue, it’s a typical Andy Hardy story, with youthful mistakes, romantic entanglements, and Mickey Rooney’s boundless zeal. You don’t have to have seen all of the previous Hardy pictures to drop into the action, although it does help if you have seen Love Finds Andy Hardy (1938), the earlier movie that introduces Judy Garland’s Betsy Booth character. Garland’s return to the world of the Hardy family makes Andy Hardy Meets Debutante a particularly appealing picture for fans of her collaborations with the energetic Rooney. For newcomers, the distinctive mix of adolescent romance, humor, and wide-eyed American idealism sums up the essence of the Hardy films’ enduring appeal.

At home in Carvel, Andy is nursing a crush on New York society girl, Daphne Fowler (Diana Lewis), and he foolishly brags about knowing her when his friends discover his passion. Andy is forced to prove his claims when Judge Hardy (Lewis Stone) takes the whole family to New York as part of his mission to protect the Carvel Orphanage from big city lawyers who want to defund it. Andy’s friend, Betsy (Judy Garland), tries to help him, but Andy suffers a series of shocks to his ego as he attempts to meet Daphne, and even Judge Hardy becomes concerned about the implications of Andy’s behavior.

Part of Andy Hardy’s appeal is his penchant for getting into scrapes; neither an angel nor a complete reprobate, he’s a twentieth-century Tom Sawyer with a waggish sense of fun and a lively eye for the ladies. Wherever Andy goes, girl trouble follows, and in this outing he has Polly Benedict (Ann Rutherford), Betsy, and Daphne to juggle. Andy thinks he’s too sophisticated for Polly, and he treats Betsy like a kid, but he soon finds out that the wealthy Daphne is out of his league. “There are millions of nice people in the world,” Daphne’s mother tells him, “and Daphne can’t be friends with all of them.” The irony of his comeuppance never seems to dawn on Andy, but the audience sees quite clearly that he reaps as he has sown. His taste in girls needs adjusting, anyway, if he can favor Daphne over her more available competition. Polly, the hometown favorite, wins our approval thanks to Ann Rutherford’s flashing eyes and bold manner, while Judy Garland makes Betsy so sweet and sadly lovestruck that we root for her even though we know that Polly has already staked her claim. Garland’s performance of “Alone,” which starts as a gag and ends with tears, is an emotional highlight of the picture that showcases the young star’s tremendous talent.

Comedy tempered with sentiment is the Andy Hardy formula, and the threat to the orphanage provides a counterweight to Andy’s romantic hijinks. Judge Hardy proves his faith in the system, lectures Andy on American ideals, and wins over a courtroom with the assistance of an adorable orphan, all of which will strike modern viewers as terribly naive. Still, with the Depression in the rearview mirror and the war directly ahead, Americans in 1940 must have wanted very much to believe in the benevolent paternal authority that Judge Hardy embodies. Andy’s relationship with his father gets a great deal of play, while his mother, aunt, and sister hardly make appearances at all. The serious part of Andy Hardy Meets Debutante has nothing to do with women but concerns itself with Andy’s emerging identity as a man with a particular place in the world.

The Andy Hardy series continued until 1958, when Mickey Rooney made his final bow as the character in Andy Hardy Comes Home. George B. Seitz directed most of the Andy Hardy pictures, beginning with A Family Affair (1937), You’re Only Young Once (1937), and Judge Hardy’s Children (1938). For more of Mickey Rooney’s youthful roles, see A Midsummer Night’s Dream (1935), Captains Courageous (1937), and Boys Town (1938). Diana Lewis, who was married to William Powell for more than forty years, retired from acting in the early 1940s after roles in Bitter Sweet (1940), Go West (1940), and Johnny Eager (1941). If you enjoy the collaborative work of Rooney and Garland, be sure to see their musicals together, particularly Babes in Arms (1939), Strike Up the Band (1940), and Babes on Broadway (1941).