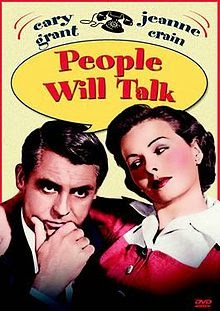 Cary Grant is best remembered today for a long list of great films, including comedies like Bringing Up Baby (1938) and The Philadelphia Story (1940) and Hitchcock thrillers like Notorious (1946) and North By Northwest (1959). Although not as well-known as those undisputed hits, People Will Talk (1951) is a warm and very funny romantic comedy about the human side of the medical profession. Written and directed by Joseph L. Mankiewicz, the movie stars Grant as a sympathetic doctor who insists on the individual humanity of each of his patients, even though his concern for them often goes far beyond the limits of his professional obligation.

Grant plays Noah Praetorius, a successful physician with a habit of collecting people who need him, from the mysterious Mr. Shunderson (Finlay Currie) to the desperate Deborah Higgins (Jeanne Crain). His popularity and success make him the target of a jealous colleague (Hume Cronyn), who hopes to discredit Praetorius by dredging up the secrets of his previous work, his unconventional methods, and his unusual associates.

The romantic angle depends on Praetorius’ evolving relationship with Deborah, a single young woman who attempts to kill herself when Praetorius tells her that she’s pregnant. The doctor saves her life and lies to her in order to prevent a second attempt, but somewhere along the way he falls in love with her, too. Grant balances the serious and comic aspects of this situation perfectly, and Jeanne Crain gives the troubled heroine a powerful appeal. The idea of a romance building around an unmarried woman’s pregnancy seems surprising, even shocking, for the time, but the movie handles it with delicate sympathy, with the details about Deborah’s dead lover calculated to make a contemporary audience forgive her transgression and deem her worthy of the hero’s unconditional acceptance.

Several especially engaging character actors provide ample support for the romantic leads and help to steer the movie back into comedic territory. Finlay Currie proves a real scene-stealer as the simple-minded Shunderson, whose history turns out to be both pitiful and bizarre. Hume Cronyn is delightfully petty and vindictive as Grant’s chief antagonist, Professor Elwell, and Margaret Hamilton has a great uncredited appearance at the start of the film as a former housekeeper who knows something about the good doctor’s past. Walter Slezak and Sidney Blackmer round out the cast as some of the doctor’s loyal friends, and there’s a wonderful scene in which the three men act like children in their enthusiasm over a toy train set.

An earlier version of this post originally appeared on Examiner.com.
Posted by Jennifer Garlen at 5:59 PM No comments: 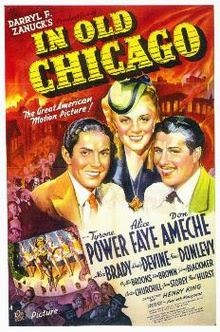 Mrs. O'Leary and her troublesome cow make their obligatory appearance in this 20th Century Fox tale of urban disaster, which lets the viewer know up front that In Old Chicago (1937) is more a fable than a history lesson. Like the earlier San Francisco (1936), this picture sets a very personal story against the backdrop of a critical moment in American history, and it also sports an impressive round of special effects to demonstrate the scope of its climactic conflagration. Until the fire breaks out, however, there are plenty of fireworks between the stars to keep the audience watching, with Tyrone Power and Don Ameche as sparring siblings and Alice Faye as the love interest who may or may not be enough to make Power's opportunistic heel go in for reform.

Power plays Dion O'Leary, the son of Irish immigrants and a shrewd if unethical businessman. His brother, Jack (Ameche), is a straight arrow type who becomes a lawyer and eventually a politician, thanks largely to his scheming brother's secret efforts. In the sprawling, dangerous city of Chicago, the two represent starkly different visions of the city's future, although they unite in their love for their hard-working mother (Alice Brady) and affable baby brother (Tom Brown). Each is eager for the downfall of crooked Gil Warren (Brian Donlevy), who runs the city as his personal domain. Dion also nurses a passion for his business partner and star singer, Belle Fawcett (Alice Faye), but his unscrupulous methods constantly undermine their chance for romantic happiness.

Power, Ameche, and Faye were among Fox's most reliable stars, and the studio cast them in a variety of pictures in different combinations, but In Old Chicago offers an excellent opportunity to study the differences in the two leading men. Both charismatic, dark-haired, and talented, the two actors work in opposite directions as the clashing brothers. Power shows the darker side of his relentless energy, while Ameche's debonair persona inclines toward gentility. Faye, always compelling with either leading man, does her musical numbers with her usual charm but becomes most interesting when thrown into company with the disapproving Mrs. O'Leary, especially after the fire erupts and plunges the city into chaos. In a cast of first-rate players, Alice Brady stands out in the role of the Irish matriarch; she won the Oscar for Best Supporting Actress for her performance, which combines all of the classic images of maternal strength and suffering, along with some adorable beer swilling and a fanatical devotion to her dead husband's portrait.

Two years before the burning of Atlanta in Gone with the Wind (1939), In Old Chicago offers a spectacular display of flaming ruin, which serves as the film's climax and thrusts our protagonists into life or death peril. Fox lavished money on the fire sequence, which includes enormous sets blazing and expansive views of people fleeing the disaster and then suffering through the smoke and misery of the aftermath. The Academy Awards didn't yet have a category for Special Effects; otherwise, In Old Chicago would certainly have been a strong contender. Still, as impressive as the effects are, they wouldn't have the same impact without our attachment to the terrified members of the O'Leary family, who find themselves separated and struggling to survive through the very worst moments of the fire.

Be sure to appreciate character actor Andy Devine in a supporting role as Dion's pal, Pickle. In Old Chicago earned six Oscar nominations and won two, including Brady's award for Best Supporting Actress. Director Henry King reunites with Power, Ameche, and Faye for Alexander's Ragtime Band (1938), and his other pictures include the Power vehicles Jesse James (1939), The Black Swan (1942), and Captain from Castile (1947). Power and Faye also star together in Rose of Washington Square (1939), with Power once again playing the heel. Ameche stars with Faye in Hollywood Cavalcade (1939), Lillian Russell (1940), and the delightful comedy, That Night in Rio (1941). Alice Brady, sadly, was near the end of her career in 1937; she died in 1939 at the age of 46. See more of her in The Gay Divorcee (1934), My Man Godfrey (1936), and her final picture, Young Mr. Lincoln (1939).
Posted by Jennifer Garlen at 5:03 PM No comments: