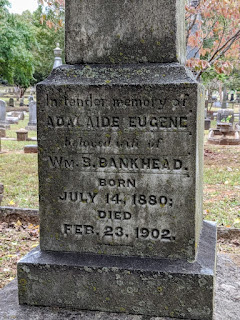 Tallulah Bankhead was born in Huntsville, Alabama, on January 31, 1902, and evidence of her Huntsville roots can still be seen around town, even though the infamous stage and screen star is long departed. There are numerous places and historical markers bearing witness to her family's impact on the city, but one of the more somber sites is the grave of Tallulah's mother, Adelaide Eugenia Bankhead, who died shortly after Tallulah's birth. Mrs. Bankhead is buried at Maple Hill Cemetery near Huntsville's historic district and downtown, not far from the house where Tallulah entered the world and her mother left it.

Perhaps Tallulah's life might have been different had her mother lived. Perhaps the early loss, which devastated her father, William, drove some of the darker elements of Tallulah's personality. It's impossible to say for sure, but knowing the dizzying heights and terrible lows of the actress' life one can't help but wonder when standing beside her mother's grave. In 1902 the infant Tallulah was baptized next to her mother's coffin, and she and her elder sister, Eugenia, were packed off to be raised by their paternal grandmother, their maternal grandmother having also died just after giving birth to their mother. Tallulah's mother was just 22 years old when she died; Tallulah died too soon at 66, but she packed a dozen lifetimes of success and suffering into those 44 years her mother never had. 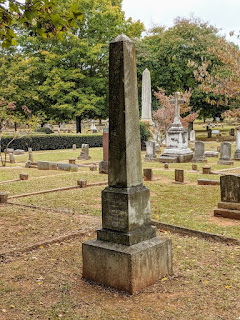 Tallulah returns to Huntsville each year in spirit as one of the resident "ghosts" of the Maple Hill Cemetery Stroll, though she herself is buried in Maryland, where her sister lived. You'll find a costumed performer inhabiting the role of the iconic star near her mother's grave, waving a long cigarette holder and holding forth about her family and her own legendary exploits. The event is well worth a visit if you're in the area. 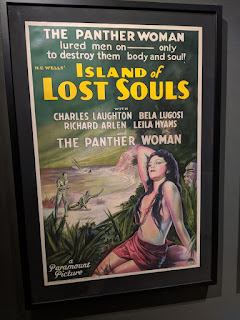 Metallica guitarist Kirk Hammett is a dedicated classic horror and science fiction fan who is sharing his love for these movies through a touring exhibit of posters and other artifacts from his personal collection. "It's Alive! Classic Horror and Sci-Fi Art from the Kirk Hammett Collection" is currently on exhibit at the Royal Ontario Museum in Toronto, where I caught up with it earlier this month for a delightful tour of gorgeous posters for some of of my all-time favorite films.

Hammett's collection features some amazing posters, including art for Frankenstein (1931), Island of Lost Souls (1932) Dracula's Daughter (1936), I Walked with a Zombie (1943), and dozens of other films. The exhibit organizes the posters by film, era, genre, or star so that groupings have a common theme of some sort, with the major monsters and stars getting special areas that focus on them. The displays also include some three dimensional items like props, costumes, and several of Hammett's custom horror themed guitars. Particularly fun are the excellent wax figures of Bela Lugosi and Boris Karloff wearing costumes from their films. The exhibit stages a number of items so visitors can take selfies with them, which makes the experience even more fun. 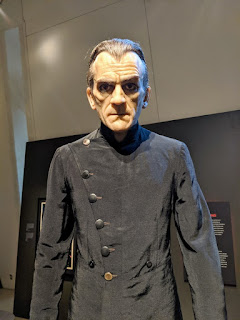 My sister and I were the first people to visit the exhibit on our morning at the ROM, which allowed us plenty of space to take photos and talk about the movies. A true classic horror enthusiast can easily spend an hour in the exhibit, but it's small enough to tour in about 30 minutes if you're pressed for time. During our visit the accompanying soundtrack was a Hammett instrumental cover of Blue Oyster Cult's "Nosferatu," which played with a video in the section displaying Hammett's guitars. Because the exhibit was empty when we arrived I could hear the creepy, familiar opening notes of the song perfectly, which cast a tingle of delicious dread over the whole exhibit.

If you're able to visit Toronto in the near future, the Kirk Hammett exhibit is absolutely worth the trip and the extra admission price. The exhibit will remain at the ROM until January 5, 2020. It will then move to the Columbia Museum of Art in South Carolina and be available there from February 15 until May 17, 2020. If you can't get to the exhibit in person there's a gorgeous photo book of the collection available on Amazon for $20.97, which is a great deal compared to the amount you'd pay for it at one of the museum shops. 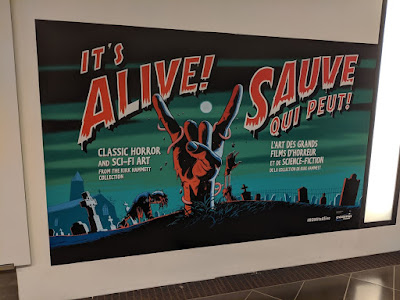 Posted by Jennifer Garlen at 9:52 AM No comments: