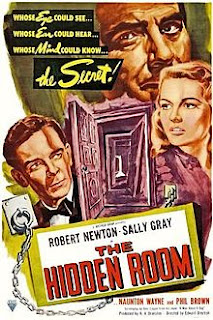 Released in the United States as The Hidden Room, Edward Dmytryk's Obsession (1949) is an unusual little gem of a thriller, a strangely polite and very English story of murder, jealousy, and revenge. It makes the most of its cast and its setting to craft a thoughtful tale of suspense that never becomes showy or overdone, with especially effective use of Robert Newton and post-war London. In fact, Obsession would probably have enjoyed enduring fame had it featured bigger stars or a different director, but don't let its obscurity dissuade you from spending some time with this unique film.

Robert Newton leads as psychiatrist Clive Riordan, who gets fed up with his wife's affairs and decides to murder the next man she takes on as a lover. Unfortunately for American Bill Kronin (Phil Brown), he happens to be the next man, and Clive soon has him imprisoned in a hidden room beneath a bomb damaged area of London. Clive's wife, Storm (Sally Gray), suspects that Clive has murdered Bill but can't prove anything to the police, while Clive keeps Bill alive as long as there's a chance that Scotland Yard might deduce his role in making Bill disappear. Bill, meanwhile, suffers loneliness and anxiety in his secret prison, even as he hopes that Clive's murderous plans will ultimately fall through.

The consequences and cultural shifts that followed World War II shape the subtext of the film and make it much more sophisticated than a simple murder plot. Like The Third Man (1949), Obsession takes advantage of the ruined landscapes of post-war Europe; Clive's plot hinges on the availability of abandoned and damaged buildings in which to hide his prisoner. The film also captures a strong feeling of English resentment toward American usurpation as a result of the war; not only is Bill poaching Clive's wife, but there are American sailors lolling in the streets, and at Clive's club the conversation inevitably turns to the strange colonials and their omnipotent dollars. Bill, the interloping young American, embodies all that Clive and his peers abhor about the new order of the world, but the American influence proves inescapable, even to the indubitably English Clive.

It's easy to imagine more illustrious stars in the roles, but each actor in the film delivers a compelling performance. Newton, a character actor best remembered as Long John Silver in Treasure Island (1950), here plays a role that would have perfectly suited Claude Rains, but Newton does such a good job that Rains' absence cannot be lamented. Newton keeps Clive in a low register throughout, so that he always seems like a perfectly reasonable human being who just happens to be dead set on murdering his wife's lover. His lethal plans aren't personal as far as Bill is concerned; in fact, he's unfailingly polite to his intended victim, even when Bill cracks under stress. With his slight build, all-American persona, and casual amiability, Phil Brown might be a stand-in for Henry Fonda as Bill, whose inherent decency becomes more apparent after he pays for his caddish dalliance with another man's wife, especially when he rescues Clive's persistent little dog, Monty, from becoming a test subject for Clive's acid bath. The beautiful but unfaithful Storm might have been played by any of the classic Hitchcock blondes, but Sally Gray has the perfect jaw and disdainful gaze to convey Storm's essential nature. Naunton Wayne arrives late in the picture as the Scotland Yard superintendent, Finsbury, but he adds another aspect of the English character to the proceedings as he corners Clive through a series of seemingly harmless exchanges. One can imagine Cecil Kellaway in the part, but Wayne is precisely right for it himself, and to English audiences he would have been quite recognizable from his appearances as the comical Caldicott in previous films.

Edward Dmytryk's directorial career suffered after he was caught up in the anti-Communist hearings of the late 1940s, but for more of his work see Murder, My Sweet (1944), Crossfire (1947), and The Caine Mutiny (1954). In addition to his appearances as Long John Silver in two films and a television series, Robert Newton can be found in This Happy Breed (1944), Oliver Twist (1948), and The Desert Rats (1953). Naunton Wayne turns up as Caldicott in both The Lady Vanishes (1938) and Night Train to Munich (1940), while Sally Gray appears in Green for Danger (1947). You might not recognize Bill Kronin as a young man, but you've certainly seen him; he had in small parts in The Pink Panther Strikes Again (1976) and Superman (1978) but gained a measure of movie immortality as Luke's Uncle Owen in Star Wars: A New Hope (1977). 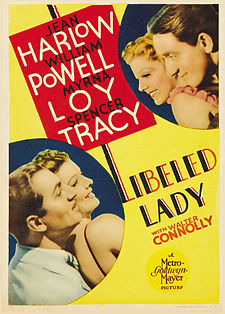 Hollywood has always loved newspaper stories, especially when there's scandal and salacious tabloid gossip involved, and Libeled Lady (1936) delivers all that and more. Directed by Jack Conway, Libeled Lady is a screwball comedy times two, with four big stars in its leading roles, although William Powell and Myrna Loy steal the picture from Spencer Tracy and Jean Harlow with their perfect comic dialogue and irresistible romantic chemistry.

Tracy opens the film as newspaper man Warren Haggerty, who has landed his publication in a huge libel suit thanks to a scandalous report about wealthy socialite Connie Allenbury (Myrna Loy). Haggerty hires smooth operator Bill Chandler (William Powell) to set Connie up in a compromising situation that will derail her lawsuit. As part of the plot, Haggerty even convinces his own impatient girlfriend, Gladys (Jean Harlow), to marry Bill and then pretend outrage when Bill is caught with the unsuspecting Connie. Bill, however, throws a wrench in the plan when he actually falls for Connie, while Gladys begins to behave as if she really were Bill's jealous wife.

For classic film fans, the quadruple leads are the real draw, with Tracy and Harlow playing a rougher, more robustly hilarious pair and Powell and Loy doing their distinctively witty take on romantic comedy. The action moves along at a brisk pace. Tracy and Harlow are both very entertaining, especially when they argue, but the fireworks really go off when Powell and Loy get together. There's just something about them that the camera - and the audience - can't resist. Powell also exercises his talent for physical comedy in an especially funny scene in which Bill tries to fish his way into the good graces of Connie and her father (Walter Connolly). Much of the story is strikingly modern in the sense that it plays some rather shocking ideas for laughs; films of the 1930s often reveal a very casual attitude toward divorce, but here we also get a sham marriage and the threat of bigamy, and neither of them seems like a very big deal.

Jean Harlow gets top billing for this picture, and it's worth noting that the Harlow films - though sadly few in number - do offer some really interesting ensembles of iconic stars. Libeled Lady sets her up with two different leading men - Tracy and Powell - and gives her Loy as a female foil. In the same year, Loy also acts as a counter to Harlow in Wife vs. Secretary (1936), which presents Clark Gable and James Stewart as Harlow's two romantic opportunities. Dinner at Eight (1933), a true ensemble picture, pairs Harlow with Wallace Beery, while Bombshell (1933) sets her between Lee Tracy and Franchot Tone. Her pictures always seem to feature casts that revel in contrast, whether between Harlow and her fellow actresses or between the different men who vie for her affections. Like most of the studios of that time, MGM played mix and match with its stable of performers, but the Harlow movies almost always seem like particularly good efforts at getting the right group into the right roles.

Libeled Lady earned a Best Picture nomination at the 1937 Academy Awards, although a different Powell and Loy picture, The Great Ziegfeld (1936), took home the prize. The elegant duo gained their greatest fame playing Nick and Nora Charles in The Thin Man (1934) and its numerous sequels, although Powell is also justly celebrated for his performance in My Man Godfrey (1936). For more of two time Oscar winner Spencer Tracy's work in the 1930s, see Fury (1936), San Francisco (1936), and Captains Courageous (1937). Tracy and Harlow also appeared together in another 1936 picture, Riffraff, but Libeled Lady is the happier story of the two. Jean Harlow's career ended tragically in 1937, when the actress died of kidney failure at just 26 years old. See more of her with frequent costar Clark Gable in Red Dust (1932), China Seas (1935) and her last film, Saratoga (1937).
Posted by Jennifer Garlen at 11:05 AM No comments: