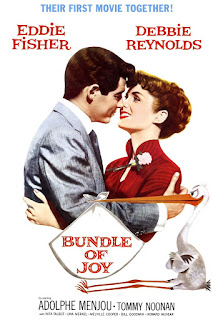 If you've already watched all of your regular Christmas classics, you might consider trying out some less familiar holiday fare, including the 1939 comedy Bachelor Mother and its 1956 musical remake, Bundle of Joy. Although the original movie is generally considered the better picture, Bundle of Joy has plenty of color and music to make it a satisfying seasonal sweet, especially with the adorable Debbie Reynolds stepping into the lead role first filled by Ginger Rogers. Bright, cute, and cheerful, Bundle of Joy makes for a nice break from heavier holiday classics like It's a Wonderful Life (1946), and the supporting cast includes extra gifts for classic movie fans with appearances by Adolphe Menjou and Una Merkel.

Reynolds stars as Polly Parish, a department store salesgirl who gets fired just before Christmas. While hunting a new job she picks up a crying infant on a doorstep, only to be mistaken for the child's mother.  The foundling home arranges to get her rehired on the condition that she claim and care for the baby, which Polly is at first extremely reluctant to do, but nobody will believe the truth. She catches the attention of the store owner's son, Dan (Eddie Fisher), and the two begin a sort of friendship that quickly snowballs into something more, but soon enough Dan finds himself on the wrong side of the bassinet as his father (Adolphe Menjou) believes that the baby is a joint production by Polly and Dan.

In 1956, audiences would have been expected to know that Reynolds and Fisher were newlyweds in real life, making the onscreen pairing especially appealing, and Fisher was a big singing star himself at the time. Those watching the picture today will immediately recognize Reynolds as the real star of the show and probably view the romance with Fisher as ironic, given his scandalous affair with Elizabeth Taylor and the couple's divorce in 1959. The pair's first child, actress Carrie Fisher, was born the same year that Bundle of Joy appeared, and in fact Reynolds was pregnant with her daughter during the making of the picture. Those biographical details color a modern viewing of the movie and lend it an edge that it doesn't contain within itself, where Reynolds' mega watt charms obliterate all shadows, even the social taboo against unwed motherhood.

Eddie Fisher strikes me as a bit flat in his role, there for his singing ability and marriage to Reynolds and not for his acting talent, but I might be biased by all that biographical baggage. More amusing than Fisher are the supporting players, especially Adolphe Menjou as the aspiring grandfather and Una Merkel as Polly's understanding landlady. Both of their characters are more than ready to fit Dan up for fatherhood, with Merkel's landlady giving Dan a very shrewd squint when she sees him and the baby together. Menjou lands the funniest line of the film when he exclaims, "I don't care who the father is, I'm the grandfather!" Tommy Noonan is also memorable as the irritating opportunist, Freddie, who refuses to be shaken off by Polly and hopes to benefit from her relationship with Dan. Nita Talbot has some fun scenes as Polly's friend, Mary, who helps to shoo Freddie away whenever he turns up to pester Polly at the store.

Bundle of Joy was directed by Norman Taurog, who won an Oscar for Skippy (1931) but is probably better remembered for Boys Town (1938). For more of the delightful Debbie Reynolds, see Singin' in the Rain (1952), Tammy and the Bachelor (1957), and The Unsinkable Molly Brown (1964). You'll find Eddie Fisher with his next wife, Elizabeth Taylor, in Butterfield 8 (1960), but after that his career fizzled. For more classic Christmas romance, try Holiday Affair (1949), It Happened on Fifth Avenue (1947), Christmas in Connecticut (1945), and The Bishop's Wife (1947).
Posted by Jennifer Garlen at 5:05 PM No comments:

If you enjoy my classic movie posts here at Virtual Virago, you might also enjoy my new column, Silver Screen Standards, at the fabulous Classic Movie Hub. Each month I have a new post there about a different film, star, genre, or other topic. So far I've written about The Wizard of Oz (1939), Margaret Rutherford, Boris Karloff, Lassie Come Home (1943), and Mr. Blandings Builds His Dream House (1948), with more posts to come every month in 2020. I'm delighted to be part of the CMH community and have really enjoyed reaching new readers with the Silver Screen Standards column.

While you're visiting CMH, be sure to check out regular columns by the other fantastic contributors to the site, including Noir Nook by Karen Burroughs Hannsberry, Classic Movie Travels by Annette Bochenek, and Silents are Golden by Lea Stans. You'll find a full list of the CMH monthly columnists here!

My next post for Classic Movie Hub will be about the significance of the kitten in The Strange Love of Martha Ivers (1946). I'll also be posting more this month here at Virtual Virago - my move to a new house in October has kept me away from the computer much of the fall, but things have settled down now!
Posted by Jennifer Garlen at 4:28 PM 2 comments: