Part crime drama and part body horror, The Penalty (1920) helped to propel Lon Chaney to true stardom after seven years in the film business and a long roster of less memorable roles. The melodramatic adaptation of Gouverneur Morris' novel about an amputee crime lord gave Chaney the opportunity to demonstrate the lengths he would go to create a physically distinct character, but it also allowed him to show his skill at conveying that character's complex emotional experience. Nearly a century later, Chaney's performance still has the power to move and horrify his audience in equal measure, although some of the story's attitudes toward women, immigrants, and people with disabilities have not aged nearly as well.

Chaney plays a notorious San Francisco kingpin called Blizzard, who lost his legs as a young boy when a novice surgeon (Charles Clary) prematurely amputated them following a car accident. The malpractice was covered up by the doctors, but Blizzard has never forgotten the gross injury done to him. While he plots the ransack of San Francisco with his criminal gang, Blizzard watches for an opportunity to avenge himself on Dr. Ferris, who has since become a well-respected surgeon. He finds his chance when the doctor's artistic daughter, Barbara (Claire Adams), advertises for a model for her sculpture of Satan after the Fall. Meanwhile, Blizzard himself is the target of the secret service, which sends the intrepid agent, Rose (Ethel Grey Terry), undercover into Blizzard's lair.

Chaney has a particular genius for making tragic figures of his most monstrous men, and Blizzard is a terrific example of the actor's ability to make us feel pity and even sympathy for someone sunk so low in the worst of human emotions. Of course we stare at Chaney's tortured body and wonder how he manages the physical feat of playing a legless man, but his face tells us even more about Blizzard's self-loathing and his longing for something beautiful and good in his life. He can look like the devil incarnate, but he can also recall to us the innocent boy whose life was ruined by a foolish doctor's haste. He has his best scenes with the film's two female characters, both of whom respond to the buried humanity that they sense within him. Rose even falls in love with him, though she knows perfectly well the long list of crimes he has committed. If the final explanation for Blizzard's crimes seems far-fetched, it does at least give Chaney another facet of the character to portray, showing that he can be credible as good men as well as monsters.

Blizzard is made more sympathetic by the frankly obnoxious men who are meant to be the "good guys" of the piece, namely Dr. Ferris and his assistant, Wilmot (Kenneth Harlan), both of whom treat Barbara's artistic efforts as a pointless waste of time. Blizzard might be using Barbara for his own insidious ends, but at least he takes her seriously as an artist. Ferris and Wilmot both dislike Blizzard primarily for being "crippled" and "deformed," even though it was Ferris himself who wrecked Blizzard's body by being an incompetent fool. While the film provides some pushback against the sexism and ableism embodied by the doctors, it never confronts its anti-immigrant, Red Scare depiction of Blizzard's army of anarchist "foreign workers" who intend to loot San Francisco. The scheme does, at least, explain Blizzard's decision to pull his "dancing girls" off the streets and put them to work making hundreds of straw hats, which the anarchists will wear as a sort of uniform when they rise up to ransack the city.

Despite these dated attitudes, The Penalty succeeds as a gripping silent drama with a strong flavor of the horrific thanks to Chaney's powerful performance. Anyone interested in the "man of a thousand faces" will find this picture worthwhile, especially if you've already seen later films like The Phantom of the Opera (1925), The Unholy Three (1925), and The Unknown (1927). Director Wallace Worsley worked with Chaney again on several movies, including The Ace of Hearts (1921), A Blind Bargain (1922), and The Hunchback of Notre Dame (1923). For contrast in terms of Chaney's depiction of a character with extreme leg problems, try West of Zanzibar (1928).

If you want to read more about The Penalty, check out this thorough discussion of the film at Movies Silently (warning - includes spoilers). The Penalty is currently available for streaming on the horror service Shudder.
Posted by Jennifer Garlen at 4:57 PM No comments: 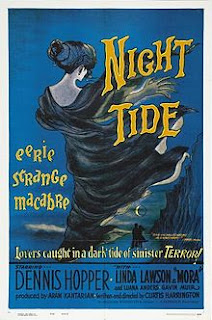 Written and directed by Curtis Harrington, Night Tide (1961) offers a moody atmosphere and a very young Dennis Hopper as its main attractions, along with a tragic story about a girl who believes she might be a supernatural temptress from the deep. Its low budget production and ambiguous monster might not thrill everyone, but fans of Val Lewton's work will find a lot to appreciate here. Night Tide relies on doubt and suggestion for its creeping sense of unease, as viewers struggle to learn the truth about the beautiful girl alongside Hopper's infatuated protagonist. If you like Cat People (1942) or even cult favorites like Herk Harvey's Carnival of Souls (1962), Night Tide is worth tracking down.

Hopper plays young Navy sailor Johnny, who wanders onto the Santa Monica Pier lonely and looking for love. He finds an opportunity with Mora (Linda Lawson), a beautiful but mysterious girl who plays a mermaid in one of the pier's sideshows. Soon Johnny learns unnerving tidbits about Mora, including the drowning deaths of her last two boyfriends. Her guardian, Captain Murdock (Gavin Muir), also warns Johnny about Mora, and even Mora herself seems to believe that she poses a danger to her lovers. Johnny isn't sure if more mundane perils dog Mora or if she might really be a deadly siren born to lure men to a watery grave.

The amusement pier is an effective setting for a story of strange, doubtful fear; Johnny drifts through the arcades and attractions like a soul caught in a gaudy, slipshod Purgatory, where nothing seems entirely real. He visits a fortune teller, strikes up a friendship with the owners of the carousel, and watches Mora in her aquarium, where she lies underwater in a mermaid costume and brushes her long, dark hair. A mysterious older woman turns up now and again to frighten Mora, but when Johnny tries to follow her she vanishes. Nothing very horrifying happens at the pier. The events are merely uncanny, but they nurture Johnny's nagging uncertainty about his love. The most overtly frightening moment is Johnny's nightmare near the end of the movie, when it's clear that his subconscious has absorbed more of the situation than his rational mind will admit.

If you grew up watching older, rougher versions of Dennis Hopper, it's a shock to see him so smooth-faced and boyish here. He had been working as an actor since 1954, but in Night Tide his character is strikingly innocent and inexperienced; he arrives in Santa Monica almost an infant, having recently lost his mother and hoping to see the world. He latches onto Mora without knowing anything about her, a dangerous course in a liminal space like the pier, situated as it is between land and sea, terra firma and the fantastic. Linda Lawson is fittingly bewitching as Mora, who pities Johnny, loves him even, but also fears that she might bring about his doom. She has a foil in Luana Anders' tomboyish Ellen, who pines after Johnny but knows she can't compete with the mermaid's charms. The love triangle adds an extra wrinkle to the tale, since Johnny can't even see the appeal of ordinary Ellen when he only has eyes for the mythical Mora. Whether her powers are real or not, Mora functions as a siren in the way she mesmerizes the men in her life, including Captain Murdock, whose feelings for her are not exactly paternal in spite of having raised her since he found her as a child. The conclusion confirms that the danger is real, even if the mermaid is not.

Curtis Harrington went on to write and direct Queen of Blood (1966), another cult horror classic; he also directed What's the Matter with Helen? (1971) and The Killing Kind (1973). For more of Dennis Hopper's early work, see Giant (1956), Gunfight at the OK Corral (1957), and The Sons of Katie Elder (1965); he also turns up in Queen of Blood. Linda Lawson worked mostly in television, but you can see her with Audie Murphy in Apache Rifles (1964). Luana Anders made more contributions to the horror genre with Pit and the Pendulum (1961) and Dementia 13 (1963), but she also appears with Hopper in Easy Rider (1969) and returns to work with Harrington in The Killing Kind.

Posted by Jennifer Garlen at 5:21 PM No comments: