Spoiler alert! This essay discusses the ending of the film at length. Viewers who want to be surprised by the ending should not read this post until after they have seen the movie for themselves. 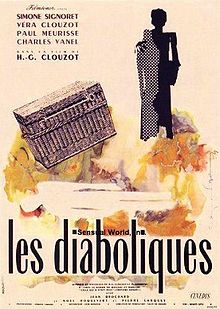 Henri-Georges Clouzot’s 1955 French thriller, Les Diaboliques (also known as Diabolique), is famous for its twist ending, which the film’s promotional material begged viewers to keep secret in order to preserve the shock value for later audiences. Like the best surprise endings, the twist of Les Diaboliques hides in plain sight; it is both unexpected and inevitable. In fact, the clues about the movie’s ending are everywhere in the scenes that precede it, even in the title of the film itself. Aptly named “The Fiends” for its diabolical characters, Les Diaboliques presents us with two characters who rightly lay claim to such a title, while its third protagonist is persistently associated with angels and saints. Two of these characters belong together, but the film encourages the viewer to mistake which two in spite of its own strong hints about the truth.

The set-up misleads us by suggesting that the two women are the titular fiends for plotting the murder of the man both of them seem to hate. Nicole (Simone Signoret) is the smarter, tougher, and more ruthless of the pair, while Christina (Véra Clouzot) is the meeker follower. Nicole is the sexually transgressive mistress, while Christina is the legal wife, but Nicole seems far more determined to murder Michel (Paul Meurisse), which is immediately suspicious since Nicole does not act like the kind of woman who would take such a risk without getting some material good from it. Michel is a faithless brute, to be sure, but Christina balks at murder because her religious faith has already dissuaded her from getting a divorce. She only goes along with the plot at Nicole’s insistence, even though Michel has obviously abused her and openly hopes for her death.

In spite of her real abhorrence for Michel, Christina is no fiend, and nearly every scene in the movie places her firmly in the realm of the angels. Even her name associates her with her Christian faith. With her prayers and pigtails, she embodies the asexual purity of the virgin martyr; she even keeps an altar in her bedroom. Only once do we see Michel initiate a sexual encounter with Christina, and this scene plays out as a rape that cuts away as Christina pathetically protests. The camera shoots Christina in a way that complements our sense of her as victim and martyr, emphasizing her pale face and small size. These roles are established early on and are repeated as the various physicians foretell her death; she is slowly succumbing to heart failure even as the movie begins, and she becomes increasingly fragile as the narrative unfolds, especially after the disappearance of Michel’s corpse. 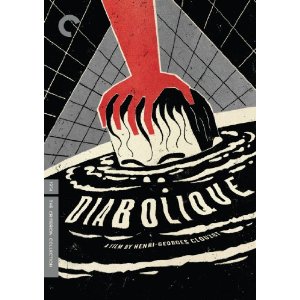 As it turns out, the real fiends of the story are Nicole and Michel, who have concocted an incredibly complicated plot to kill Christina. By making Christina believe she has committed murder they intend to destroy her heart both literally and figuratively. Truly demonic in their cruelty and greed, Nicole and Michel refuse to wait patiently for Christina to die on her own, and they manipulate her in the most painful and vicious manner imaginable. They are, in short, a perfect couple, a pair of pitiless fiends. The only justification for their elaborate scheme - they could just jump out of a closet a few times and accomplish the same goal, and in Gaslight all it takes are some flickering lamps and a few missing items -  is their wicked delight in tormenting Christina spiritually as well as physically.

Christina’s death at the end of the movie is thrown into some doubt when a young student at the boarding school says that he saw her and spoke to her, but this, too, supports our sense of her character as a religious martyr. Christina dies terrified by Michel’s apparent return from the grave, her heart finally exhausted by fear, but we know that death was inevitable for her, anyway. Michel has merely hastened the event. Michel and Nicole are caught and punished for their actions, which gives us a sense of justice in this world for Christina, but the anecdotal account of her return suggests spiritual justice, too. There is no reason to think that Christina is physically alive at the end of the movie – that would merely be a stay of execution for her, and nothing in the film implies that she stages her death as Michel had staged his. Instead, the story of her reappearance and kindness to the boy convey an idea of Christina’s soul being preserved; she is free now from her own ruined body and her antagonists’ cruelty. For a religious martyr, that’s as good an ending as one is going to get.

If you like Les Diaboliques, try other twisted thrillers like Gaslight (1944), The Spiral Staircase (1945), and, of course, Vertigo (1959), which also began as a story by Pierre Boileau and Thomas Narcejac. For a better sense of the religious overtones of the film, try watching The Passion of Joan of Arc (1928) first and then looking at Clouzot’s representation of Christina again.
Posted by Jennifer Garlen at 2:17 PM