This post is part of the James Stewart Blogathon hosted by the Classic Film & TV Cafe. You can view the complete blogathon schedule here. 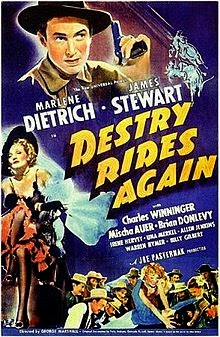 If we come to Jimmy Stewart as a Western star looking back from the present, we peer through a history that makes his appearance in the genre seem obvious, perhaps even necessary. We see him in The Shootist (1976) and The Man Who Shot Liberty Valance (1962) with that greatest of Western icons, John Wayne, and he holds his own there as a believable resident of Wayne’s frontier world. Stewart seems as much a part of the genre’s history as his real life friend, Henry Fonda, with whom he starred in The Cheyenne Social Club (1970) and Firecreek (1968). All three Western stars would appear in How the West was Won (1962), which is basically a who’s who of the genre. Thus, from where we stand now, Stewart looks like a natural part of the Western landscape, but that wasn't the case at all in 1939, when Stewart starred in Destry Rides Again.

It was the first Western of the young actor's career, and at that point Stewart seemed an odd choice for the role. Tall and amiable, with an air of peculiarly American innocence, Stewart had primarily been seen in romances and comedies. Frank Capra had put him to good use in You Can't Take It with You (1938) and Mr. Smith Goes to Washington (1939), but Destry was entirely new territory. It took Stewart out of the polite, civilized settings he had previously inhabited and dropped him into the rugged and rowdy frontier.

Stewart plays the film's title character, the son of a legendary lawman and the last hope of the honest citizens of Bottleneck, a wild, corrupted frontier town. Summoned by the town drunk (Charles Winninger), whom the crooks have made sheriff as a cruel joke, Destry at first seems like a terrible disappointment. He doesn't even carry a gun. As Destry says, however, first impressions are darn fool things, and even the local good time girl (Marlene Dietrich) is drawn to him, despite her understanding with the conniving crime boss (Brian Donlevy). When the crooks murder Destry's friend, he is compelled to take up his guns and rid the town of its oppressors for good.

Stewart makes Destry work precisely because he seems so unlikely as a gunslinger. Lanky, soft-spoken, and polite, Stewart's hero doesn't strike anyone as a threat, much less a gunfighter. Destry, of course, knows his own ability and lets the townspeople wallow in their assumptions. Stewart invests him with an easy nature that is only mistaken for weakness. In fact, it's born of self-assurance. When he finally takes out his guns, we see the other side of Destry's character, and this is where Stewart surprises us most. He is tough. He can be a dangerous man. There's a whole future unfolding for Stewart in this moment, one that will make him an icon not only for It's a Wonderful Life (1946) but also for Winchester '73 (1950), The Man from Laramie (1955), and The Man Who Shot Liberty Valance. There's an unexpected edge to Stewart that later directors will seize upon: Anthony Mann will reveal Stewart's darkness as an underlying vein of hysteria in The Naked Spur (1953), and Alfred Hitchcock will make it the sublime theme of his masterpiece, Vertigo (1958). Despite the fact that Destry Rides Again is technically a comedy, it actually paves the way for Stewart to venture far beyond the territory he had covered in the Capra pictures or early work like Wife vs. Secretary (1936), Born to Dance (1936), or Vivacious Lady (1938).

Thus, as a Jimmy Stewart picture, Destry Rides Again is a watershed moment in the actor's career. Only by looking back at it from the perspective of 1939 can we really appreciate how important it would become in terms of Stewart's own legacy and the evolution of the Western as a whole. Destry opens the door for an actor who would go on to make some of the finest Westerns in Hollywood history, one who would become so associated with the genre that his final screen credit would be for his performance in a Western tale. By the time he loaned his voice to An American Tail: Fievel Goes West (1991), Stewart was as much a part of the Western as any actor who ever rode a horse into a dusty frontier town. For that, we have Destry to thank.
Posted by Jennifer Garlen at 7:58 PM