Classic movie fans might be pleasantly surprised by the number of Old Hollywood stars immortalized in wax at Madame Tussauds Hollywood. While the majority of the exhibits do focus on more recent celebrities familiar to the rank and file tourists who flock to Hollywood Blvd., Madame Tussauds makes an effort to celebrate those who came before, as well. The figures themselves are quite good, and their placement encourages visitors to cozy up to Jimmy Stewart and Bette Davis or even get into the action with Peter O'Toole and Alfred Hitchcock. Here are some photo highlights of the classic star figures on display at Madame Tussauds Hollywood.

Among the classic stars you'll find the heavy hitters, of course, including Marilyn Monroe, Audrey Hepburn, Humphrey Bogart, Katharine Hepburn, Bette Davis, and Judy Garland. All are shown in costumes from their films, and some have scenes with backdrops and props to recreate particular moments from their most memorable roles. For Alfred Hitchcock you can actually get into the famous shower scene and pretend you're Janet Leigh about to meet her demise in Psycho - Hitch stands out front ready to roll cameras. You can also mount a camel next to Peter O'Toole in Lawrence of Arabia, although it's hard to get camel rider and wax figure together in a good shot. 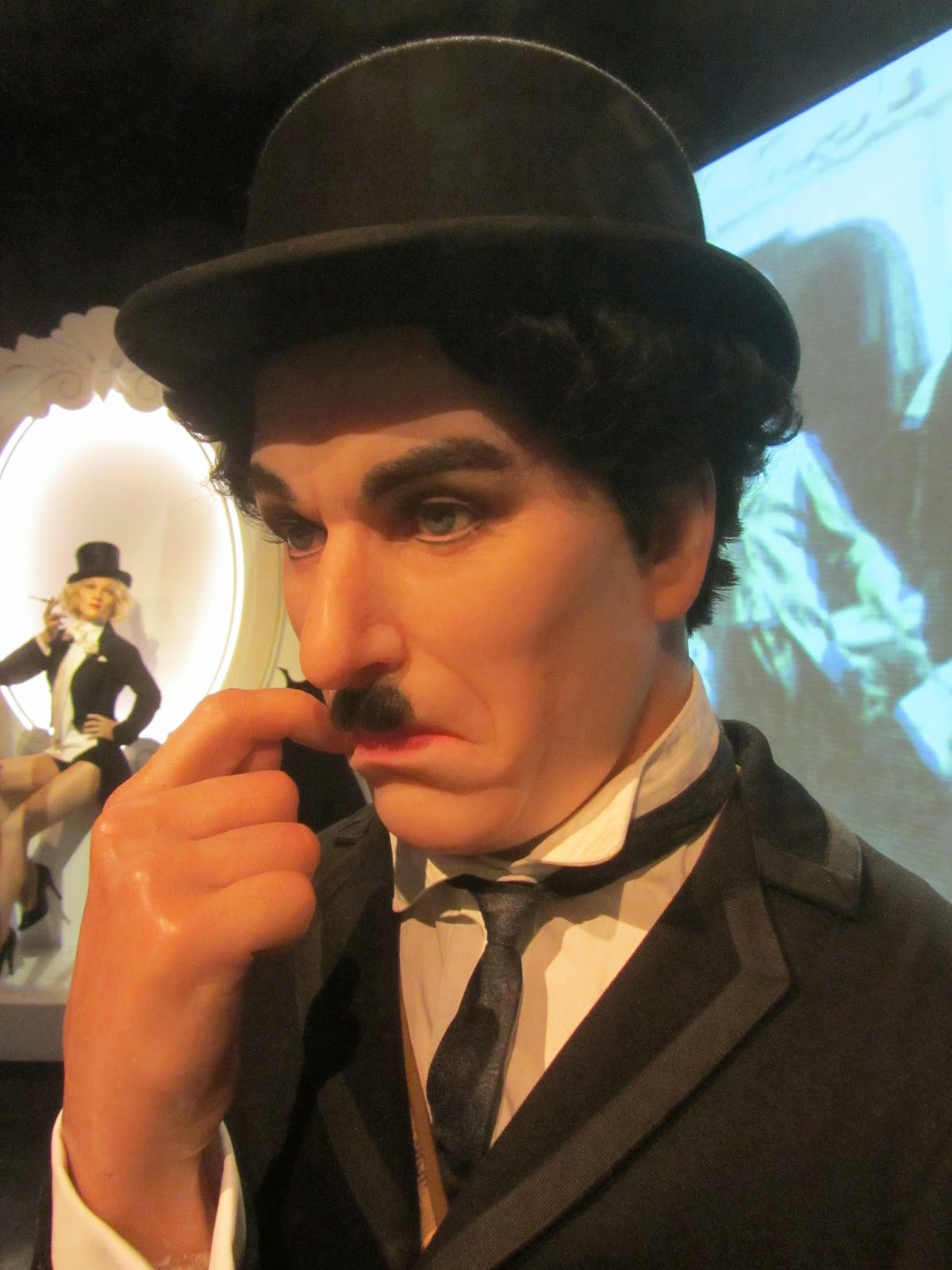 Charlie Chaplin is the museum's only real nod to the silent era, but it's nice to see the Little Tramp included in the menagerie. He hangs out near other comedians like George Burns and Bob Hope in the first section of the classic Hollywood exhibits. You can pose next to the figures and even touch them, although the staff do ask that visitors not touch the figures' faces or hair (which makes sense).


Gene Kelly is sadly absent, but the musical gets its tribute in the form of Fred Astaire and Ginger Rogers, forever frozen mid-dance.

Judy Garland appears as Dorothy against an Oz backdrop, naturally, while Bogart and Katharine Hepburn have a nice scene from The African Queen. You can even get in the boat and help Kate steer, which is fun.

If you visit the museum yourself, be sure to turn the flash off if you want good photos of the figures. They look much better that way.

One thing that struck me about the figures was how tall or short different stars were. I was especially surprised at how tall Jimmy Stewart is in his It's a Wonderful Life scene! My 5 foot 8 inch husband barely reached Clint Eastwood's shoulder, but he was glad to at least be a little taller than Raquel Welch in her One Million Years BC costume.

Madame Tussauds Hollywood is not a cheap ticket, and you'll be more likely to get your money's worth out of it if you also care about modern stars like Anne Hathaway, Bruce Willis, and Johnny Depp. The superhero exhibit includes Hugh Jackman as Wolverine and Chris Hemsworth as Thor, which will appeal to genre fans and younger kids, and there are rooms for pop stars and athletes, too. Still, if you have always dreamed of mugging with the classic stars in their signature roles, Madame Tussauds is ready to make that dream come true.

Note: Figures on display do change over time, so you might see different stars depending on when you go. John Wayne was conspicuously absent from the Western room, for example. Maybe he was off having his boots cleaned. For a different perspective and set of photos, see Kenda Bean's post about her trip to the attraction in 2010 (naturally, she has lots of photos of Vivien Leigh!).
Posted by Jennifer Garlen at 12:37 PM