Like many historical figures of the American West, William F. Cody, better known as Buffalo Bill, became a legend within his own lifetime. Unlike many of his contemporaries, however, Cody engineered the process himself, carefully crafting the persona of Buffalo Bill for his own ends. His flair for showmanship led him to create the Wild West show that entertained people all over the world and perpetuated many of the images of the Old West that we still see in films and other media today. At the center of that show was the man himself, larger than life, dressed in decorated buckskin and tall boots and crowned with flowing locks. Cody, who died in 1917, even appeared in some early film footage promoting his show; if he had lived to see the way cinema would continue his legacy he would no doubt have been pleased. Like other icons of the West, Cody has been depicted in numerous films, although most of them have succumbed to the lure of his public persona and few have looked into the facts of his actual life. An overview of Cody's appearances in classic movies reveals the extent to which Buffalo Bill looms over our imaginary Western landscape, but it also shows how much of Cody's real life has yet to be depicted on film. 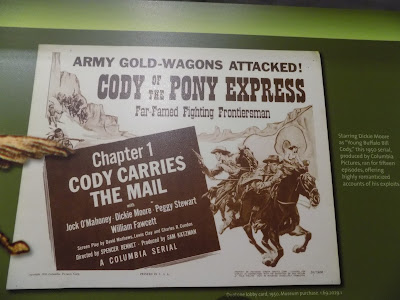 Cody actually plays himself in the first entry for depictions of Buffalo Bill on IMDB, a 1915 three-reel silent known as The Circus Girl's Romance or Patsy of the Circus. (There is also a 1912 production called The Life of Buffalo Bill, in which he is credited as himself, and a host of other shorts and documentary shorts, mostly depicting the Wild West show. Look for these under William F. Cody as an actor rather than Buffalo Bill as a character.) This was not a new tactic for the showman, who had been playing himself in stage shows starting in 1872, when he alternated between having real adventures out West and then starring in fictionalized versions of them for the stage back in Chicago. He even took to wearing his stage costume on his frontier expeditions. The plays served as tie-ins to the huge number of dime novels that starred Buffalo Bill as their hero; in all, some 1,700 stories would be produced. 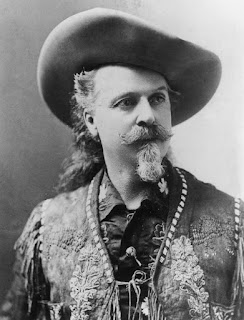 The novels were long on heroics but very short on facts. While the fictional Bill roamed the frontier and fought with Indians, the real William Cody struggled through a long-distance marriage and the deaths of three of his four children, including his five year old son, Kit Carson Cody, and his eleven year old daughter, Orra. Restless, extravagant, and always hatching a new plan for wealth and fame, Cody hit great heights as well as terrible depths over the course of his life. In 1904 he endured scandal when he unsuccessfully sued his wife, Louisa, for divorce, only to have his own affairs and alcoholism revealed to the public. The couple eventually reconciled, and Cody died on January 10, 1917, at the home of his sister in Denver, Colorado. His last living child, Irma Cody Garlow, died of the flu in 1918, and Louisa died in 1921, having outlived both her husband and all four of her children. (See the William F. Cody Archive for a longer biographical account.) 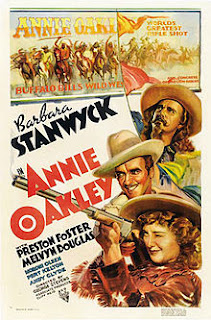 After his death, Cody continued to be popular in films and was played by a wide variety of actors. George Waggner played him in John Ford's silent, The Iron Horse (1924), and Duke R. Lee played him in both 1922 and 1927. The dawn of the talkie era brought more depictions, with lots of noisy excitement to bring both the frontier and the Wild West show to life. Moroni Olsen gets significant screen time as the showman in the 1935 Barbara Stanwyck vehicle, Annie Oakley, a very free-handed biographical account of the sharpshooter's rise to fame. Although it's not the place to look for historical accuracy, it's an excellent picture and a lively rendering of the height of the Wild West show's success. In 1940 Roy Rogers played a youthful version of Bill in the aptly named Young Buffalo Bill, which touched off a series of other productions depicting the icon's early adventures. George Reeves took up that vein with the serial, Pony Express Days, in 1940, followed by child actor Dickie Moore a decade later in Cody of the Pony Express. Other actors who took on the role in subsequent years included Charlton Heston and Clayton Moore, and even more performers played Buffalo Bill once television took hold. 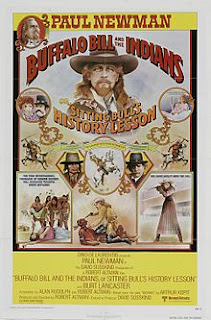 A few films from the classic era provide the most memorable screen depictions of Cody. He was treated to a full biopic production with Buffalo Bill in 1944, in which Joel McCrea plays Cody and Maureen O'Hara plays Louisa. Ironically, Moroni Olsen, who had played Bill in Annie Oakley back in 1935, here appears as Louisa's father. The picture also features Linda Darnell, Thomas Mitchell, and Anthony Quinn. Cody is probably best remembered by movie fans as he appears in Annie Get Your Gun (1950), the musical account of Annie Oakley's life starring Betty Hutton. In this picture, Louis Calhern portrays the showman, while Howard Keel costars as Annie's love interest and eventual husband, Frank Butler. In 1976, after the heyday of the classic Western had ended, Robert Altman offered a satirical look at the legend in Buffalo Bill and the Indians, starring Paul Newman in the title role. 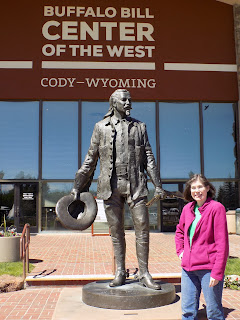 You can find Buffalo Bill in plenty of more recent films and television series. He's played by Keith Carradine in Wild Bill (1995) and by J.K. Simmons in Hidalgo (2004). New depictions are certainly still on the horizon; Buffalo Bill is a hard figure to resist, even if we always seem more interested in the legend instead of the man.

If you want to learn more about the real William F. Cody, add a visit to Cody, Wyoming, to your bucket list. Cody founded the town, which is named in his honor, and it's there that you'll find the Buffalo Bill Center of the West. The museum includes a large wing devoted to the story of the man and his myths, where you'll find not only a talking hologram of Buffalo Bill but also countless artifacts and personal items from his family and Buffalo Bill's Wild West show. While you're there, pop into the historic Irma Hotel for a buffet lunch. Cody built the hotel and named it for his daughter in 1902; the huge bar was a gift to Cody from Queen Victoria. The town will give you a palpable sense of Cody's legacy beyond his depictions on the silver screen.

Posted by Jennifer Garlen at 1:59 PM No comments:

Guns of the Old Western in Wyoming

We spent last week in Montana and Wyoming, mostly touring Yellowstone and Grant Teton National Parks, but I'm happy to say that I still found some balm for my classic movie loving soul. One of the best spots for indulging a cinema obsession was Cody, Wyoming, where we spent a full day exploring the Buffalo Bill Center of the West, a five museum complex affiliated with the Smithsonian and a treasure trove for all kinds of fascinating knowledge. I'll talk about Buffalo Bill's personal history and the movies in another post, but this time I want to focus on the Cody Firearms Museum, one of the five museums in the Center. 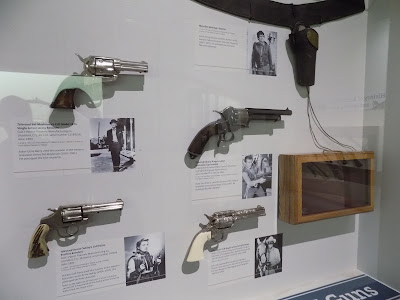 I'm not normally a gun fan; I grew up around them but find them disconcerting. In Westerns, however, I accept that guns are a necessary and iconic part of frontier culture, where homesteaders and cowboys might have good reasons for keeping firearms handy. Thus, as we were breezing through the firearms museum, not really paying too much attention to exhibits on Glocks and whatnot, I came up short when we arrived at an exhibit about guns in Westerns. This was a gun exhibit that could get my attention! 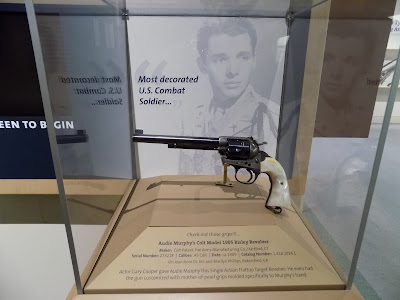 The display of Western Movie & TV Guns is not really large, but it does feature some gems sure to delight any true fan of the genre. The main cases contain the belts and guns of the stars of Bonanza as well as guns used by the stars of Gunsmoke, Bat Masterson, and The Lone Ranger. They also include a gun used by Gary Cooper in Vera Cruz (1954) and High Noon (1952). Another display pays tribute to World War II hero and Western star Audie Murphy. The gun displayed with it, a Colt Model 1905 Bisley Revolver, was a gift to Murphy from Gary Cooper. 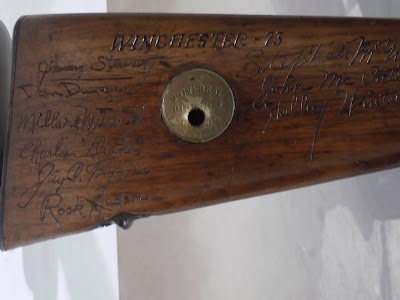 The highlight of the exhibit, however, is the iconic rifle that gives its name to the 1950 Anthony Mann Western, Winchester '73. Displayed in a case by itself, it's an impressive sight, with a production still from the film serving as its backdrop. A closer look, however, reveals that the weapon was signed by all of the film's stars, starting with James Stewart himself. It's a fabulous piece of movie memorabilia that absolutely belongs here, surrounded not only by other Western firearms but by a history of the Winchester and its importance to the settling of the frontier.

If you're ever out around Yellowstone, make time for a stop in Cody, Wyoming. There's a lot of history here for a Western devotee to devour, as well as a nightly gunfight in the street and a whole lot of gift shops and rodeos.
Posted by Jennifer Garlen at 8:53 PM No comments: