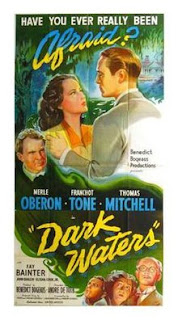 Somewhere between Lifeboat (1944) and Gaslight (1944) lies the plot of Dark Waters (1944), in which Merle Oberon stars as the survivor of a U-boat attack whose fragile sanity is tested by a collection of nefarious characters. All three pictures appeared in the same year, but the first two are decidedly better films, while Dark Waters holds interest primarily for its cast. Joining Oberon for this wartime swamp Gothic are Franchot Tone, Thomas Mitchell, Elisha Cook, Jr., and Fay Bainter, with Rex Ingram making sporadic but memorable appearances as a former employee who suspects that something is amiss at the old plantation. Dark Waters fails to deliver enough creepy atmosphere to achieve its Gothic ambitions, and the ending is more a hard stop than a proper conclusion, but Oberon is fascinating to watch as she tries to figure out whether she's going or being driven insane.

Oberon's perpetually imperiled heroine is Leslie Calvin, whose family flees the Japanese descent on Batavia (present day Jakarta) only to fall victim to a German U-boat attack at sea. Leslie survives many days in an open boat before ending up in a New Orleans hospital. After months of convalescence she travels to a nearby plantation owned by her aunt and uncle, where she hopes to recover from her post traumatic stress. She meets a handsome doctor (Franchot Tone), who quickly falls for her, but everything else goes awry as she is constantly exposed to situations that recall her ordeal and unsettle her sense of reality. Leslie begins to suspect that the manipulative Mr. Sydney (Thomas Mitchell) and his sidekick, Cleeve (Elisha Cook, Jr.), are tormenting her on purpose, but to what end?

Gothic mystery is a fine setting for Oberon's exotic beauty, but she gets better material to work with in both Wuthering Heights (1939) and The Lodger (1944), where her characters have more energy and more successfully developed plots. Franchot Tone's country doctor, George, doesn't spark much chemistry, but he seems to be the only available man in the area aside from Elisha Cook Jr.'s creepy Cleeve. It doesn't take two minutes to recognize both Cleeve and Sydney as the villains of this piece, and Thomas Mitchell has a handful of effectively menacing scenes, but Fay Bainter's Aunt Emily is neither disturbing nor reassuring, and it's hard to justify John Qualen's presence as Uncle Norbert, since he barely comes out of his room to utter a few lines at dinner. Fine actors inhabiting the background don't get enough to do, either, especially Rex Ingram and Odette Myrtil, who turns up as the mother of a large, friendly Cajun family.

There's enough potential in Dark Waters to see the movie it could be, and that warrants a viewing, especially for contrast with moodier explorations of similar plots and atmospheres. The Louisiana bayou makes an evocative setting, and the premise of Leslie's very justified anxiety about water and boats creates numerous opportunities for her to be tormented. We know from the beginning where the third act of this story will inevitably end (hence the title), but when the film finally reaches that point it seems in a hurry to wrap things up, and quite a few loose ends are left dangling. The pacing is more of a shock because there had apparently been plenty of time to linger on an earlier fais do-do sequence that adds nothing to the story. It's hard to say if director Andre De Toth or the writers are to blame for these issues, but De Toth certainly made tighter pictures over the course of his career.

Do pause a moment to appreciate the underused Nina Mae McKinney as the housemaid, Florella, who unfortunately disappears from the picture in the third act. For more of Merle Oberon, try The Private Life of Henry VIII (1933), The Scarlet Pimpernel (1934), or That Uncertain Feeling (1941). See earlier roles for Franchot Tone in Bombshell (1933), Dancing Lady (1933), and Dangerous (1935). Thomas Mitchell is best remembered for more sympathetic characters in Stagecoach (1939), Gone with the Wind (1939), and It's a Wonderful Life (1946), while Elisha Cook, Jr. offers more of his usual type in The Maltese Falcon (1941), I Wake Up Screaming (1941), and The Killing (1956). For a more thoughtful and provocative treatment of a similar atmosphere, try I Walked with a Zombie (1943), or, for some really excessive gaslighting bayou horror, go for Hush... Hush, Sweet Charlotte (1964).


* As of February 2019, DARK WATERS is available for streaming on Amazon Prime, but the print is rather muddy, especially in the outdoor night sequences.
Posted by Jennifer Garlen at 3:07 PM No comments: