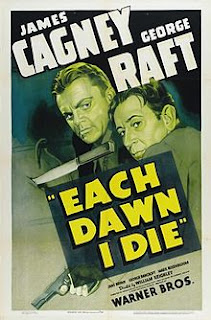 As its grim title suggests, Each Dawn I Die (1939) is an explosive drama awash in death and violence, as only Warner Brothers' 1930s gangster and prison films could deliver them. William Keighley directs the parade of brutal injustice with James Cagney and George Raft as the chief victims of a horrifically corrupt system that destroys human beings without regard for their innocence or rehabilitation. Cagney's journalist hero has chosen the moral high ground as a crusader against graft and crime, but he ends up in the same place as Raft's sympathetic gangster, and in prison Cagney learns the extent of systemic cruelty. At once a riveting drama about loyalty and a scathing critique of inhumane American prisons, Each Dawn I Die gives Cagney and Raft terrific opportunities to showcase their dramatic talents.

Cagney plays hard-driving investigative reporter Frank Ross, whose efforts to uncover political corruption put him on a crooked governor's hit list. Kidnapped and set up for a drunken driving manslaughter charge, Frank gets sent to hard labor in prison, where he earns the respect of other inmates for his tough, principled behavior. He becomes especially close to gangster Hood Stacey (George Raft), who appreciates Frank's refusal to snitch. When Stacey asks Frank to help him escape, he promises to work to clear Frank's name on the outside, but Frank suffers horrifically for his loyalty while Stacey waffles about keeping his word.

Although it features a daring escape, numerous scenes of shocking cruelty, and a wildly violent gun battle finale, Each Dawn I Die is deeply invested in its story of an unlikely friendship forged in the most intolerable circumstances. Both Frank and Stacey appear as fully realized, complex characters, despite their tough talk and glaring eyes. We come to understand that they are not so different, that both men have reacted to a corrupt, unforgiving world in the way that seemed available to them. Frank fights, Stacey assimilates, but they suffer the same fate because the system devours both its enemies and its own. Cagney and Raft deliver performances that make these characters feel very real; each has a dynamic arc that allows the actors to demonstrate their range. Cagney is especially powerful in Frank's moments of anguish and rage, showing the darkness that even a good man can embrace when his humanity is denied. Raft shines as a dangerous tough guy early on, but his slow awakening to Frank's worth reminds us that he is still a human being, too, one who has become a criminal because he thought that was simply the way of the world.

The stories of the secondary characters add nuance to the central plot, with several supporting players giving very fine performances. Jane Bryan is lovely and determined as Frank's girlfriend, Joyce, who never stops trying to save him. The couple's brief moments together at the prison are tearjerker scenes of love and misery, especially when Joyce comes to see Frank after his long, agonizing months in the hole. Maxie Rosenbloom adds a hint of comic affability to the tragedy of his character, Fargo Red, an inmate who is just another everyman chewed up by the relentless system. Louis Jean Heydt plays a similar character, but purely for tragic effect; his Lassiter becomes a victim of the sadistic guard, Pete, performed with vicious brilliance by John Wray. It's a thankless task to play the kind of villain Wray takes on in Pete, since everything about him is deplorable, but he perfectly embodies the cruelty of the system as a whole. George Bancroft has a small but important role as Stacey's lawyer, and Victor Jory makes a brief but memorable appearance as Grayce, the corrupt head of the parole board who ensures that Frank's petition will be denied.

Posted by Jennifer Garlen at 3:24 PM No comments: