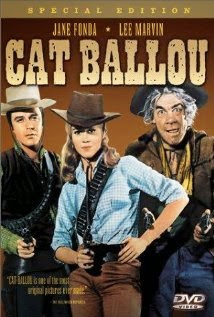 Director Elliot Silverstein’s 1965 Western comedy turned out to be an important moment in movie history, and not only because Cat Ballou became a box office hit and made Jane Fonda a star. It would provide Lee Marvin with the only Oscar of his exceptional career, and it would be the final screen appearance of the legendary Nat King Cole, who died before the movie was released. Cat Ballou also paved the way for later pictures like Butch Cassidy and the Sundance Kid (1969), Blazing Saddles (1974), and even The Villain (1979) and Rustler’s Rhapsody (1985), all of which kept the Western alive by subverting its familiar tropes. Its legacy, however, is not the picture’s only attraction; Cat Ballou is first and foremost a rollicking good time, with lively performances from its stars and a loving, if irreverent, attitude toward the genre it parodies.

Jane Fonda plays the title character, who returns home after finishing her education only to find her father, Frankie Ballou (John Marley), under pressure to sell out to developers. After Frankie is murdered by the notorious gunman Tim Strawn (Lee Marvin), Cat and her band of misfits turn to crime to avenge his death. Drunken gunfighter Kid Shelleen (also Lee Marvin) dries out for a final showdown with Strawn, while Clay (Michael Callan), Jed (Dwayne Hickman), and Jackson (Tom Nardini) agree to rob trains to prove their devotion to the determined Cat.

As the central heroine of the piece, Fonda is buxom, wide-eyed, and adorable, justifying the gang’s willingness to do anything to please her, but she has to play it straight. Other actors, Lee Marvin in particular, get the laughs. Marvin’s perpetually pickled desperado is tragically hilarious, a has-been who can’t hit a barn unless he gets a stiff drink. Even when he sobers up to face his nemesis, his transformation scene revels in the absurd, detailing the layers of artifice that make a lean, glittering killer out of an aging drunk. Like the younger men, Shelleen pines for Cat’s affection, although he eventually realizes that she’s drawn to the roguish Clay. Still, Shelleen has more personality than any of his rivals, and our attention is inevitably drawn to him every time he appears on screen. Marvin provides a textbook lesson on how to steal a picture, which helps to explain why he won the Best Actor Oscar for his performance even though Shelleen is technically a supporting role.

The rest of the supporting cast give Marvin plenty of room while making the most of their own characters. Michael Callan oozes charm, and Dwayne Hickman plays an affable clown, but Tom Nardini makes Jackson Two-Bears so attractive and sincere that you might wonder why Cat doesn’t take him more seriously as a potential mate. Also memorable are Stubby Kaye and Nat King Cole as the balladeers who narrate the film’s action; although not exactly characters within the film, they are essential to its tone and its success, forming a light-hearted Greek chorus to comment on and react to the events as they unfold. Less noticeable but equally important to the movie is Yakima Canutt, the brilliant stunt coordinator and second unit director who gives the movie some of its finest action sequences. His work elevates Cat Ballou beyond mere spoof by making the stunts and chases wildly exciting even as they elicit laughs.

Be sure to appreciate Reginald Denny as the rather silly villain, Sir Harry, and Jay C. Flippen as the more sinister sheriff. Cat Ballou earned five Oscar nominations, but Lee Marvin brought home its only win. For more of Marvin’s Western roles, see Bad Day at Black Rock (1955), The Man Who Shot Liberty Valance (1962), and The Professionals (1966). Try Paint Your Wagon (1969) if you have great affection for Marvin and a high tolerance for the ridiculous. Jane Fonda went on to seven Oscar nominations and two wins, the first for Klute (1971) and the second for Coming Home (1978), but if you like her in Cat Ballou you might also like the cult sci-fi classic, Barbarella (1968). Michael Callan and Dwayne Hickman both enjoyed successful television careers, while Elliot Silverstein directed A Man Called Horse (1970) and The Car (1977).
Posted by Jennifer Garlen at 5:30 PM