This post is part of the Great Villain Blogathon hosted by Ruth of Silver Screenings, Karen of Shadows & Satin, and Kristina of Speakeasy — see all the movie baddies at any of these three blogs. 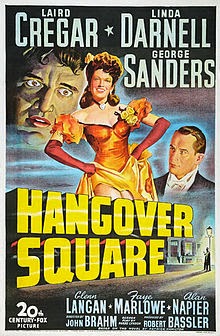 The Fox studio heads were certain that Laird Cregar was born to play villains, never mind that Cregar himself dreamed of being a romantic lead. In Hangover Square (1945), the final film of his tragically brief career, Cregar got to do both at once, creating for viewers a sympathetic, romantic figure who also happens to be a homicidal maniac. The price for his effort would prove high, indeed; Cregar died of a massive heart attack, brought on by his radical weight loss program, before Hangover Square made its way to the screen. The movie reveals the extent of the public's loss, for Cregar gives a powerhouse performance as a brilliant young composer driven to madness and murder by a heartless chanteuse (Linda Darnell) and the jarring shock of any discordant sound.

John Brahm, who directed Hangover Square, had previously directed Cregar in The Lodger (1944), in which Cregar plays Jack the Ripper as a pathetic monster driven to kill by his grief over the death of his brother. Twentieth Century Fox reunited Brahm and Cregar for a follow-up that was meant to play all of the same notes that had made the earlier movie a success, including a Victorian setting and George Sanders in a supporting role, but Cregar had other ideas. Dropping a huge amount of weight in a very short period of time, Cregar reshaped himself into more conventional leading man material and thereby added a whole new layer to his character by making the audience believe that women might actually find him attractive.

If you know Cregar's story, it's hard to watch Hangover Square without pondering these offscreen elements. We're watching an actor who is, quite literally, giving his life for his art. Here is a man who doesn't want to be known as a monster but seems trapped in that fate, anyway, which eerily parallels the story of the fictional character Cregar is playing. When the doomed protagonist goes up in smoke at the movie's end, we're left thinking about Cregar's own sudden departure from this world. He was only 31 years old, with just five years of films behind him.

Still, it's important to look closely at that performance on its own merits in order to appreciate and lament Cregar as much as he deserves. As Cregar plays him, George Harvey Bone is a shy, gifted composer who can't help turning into an insane killer every time a harsh sound assaults his ears. He's not bad; he's just really sensitive. In many ways, Bone resembles Larry Talbot in The Wolf Man (1941); an outside stimulus over which the protagonist has no control dictates his actions and ultimately his fate. As the gypsies say, "Even a man who is pure in heart and says his prayers by night, may become a wolf when the wolfbane blooms and the autumn moon is bright." Cregar, however, has to define the two sides of his character without any help from monster makeup; he does it all through his performance and the way he looks, like a wide-eyed sleepwalker lost in a maze of horrors. 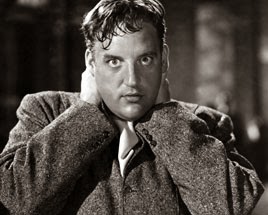 As the doomed composer, Cregar taps into the same combination of the monstrous and pitiable that makes other movie monsters sublime: Lon Chaney as The Phantom of the Opera, Boris Karloff as both Frankenstein's monster and Imhotep, Claude Rains as The Invisible Man, and Chaney, Jr. as The Wolf Man. They are all beings who long for love, particularly from beautiful young women, but they can neither control nor deny their own monstrosity. Death and ruin follow them as surely as night follows day. Cregar accomplishes as much in his performance as any of these iconic actors, but he does it by flipping a switch within himself, not by transforming into a literal monster with fangs and claws or other outward markers of the bestial id let loose. Perhaps that makes his monster more frightening, because we know it could happen to any of us without the occurrence of the supernatural. George Harvey Bone drinks no potions; nothing extraordinary happens to explain his murderous urges. He's walking along, minding his own business, and suddenly the world lurches forward with a crashing sound and something terrible has happened. It's no wonder he chooses the certainty of death in the movie's finale. He can only reclaim his humanity by destroying his monstrosity, and to do that he must destroy himself.

Laird Cregar is not a household name today; for the most part, only serious classic movie fans remember him. He played villains so well - in Blood and Sand (1941), This Gun for Hire (1942), and The Lodger (1944) as well as in Hangover Square - that it's a shame to think that he died trying to be something else. Still, with the few films that he made, Cregar proved his genius for being more than a monster. He was truly a great actor, too.

Read my essay, "Heavy: The Life and Films of Laird Cregar," to learn more about the actor and his work.
Posted by Jennifer Garlen at 9:34 PM