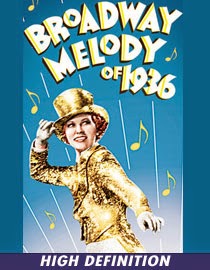 The second in a series of movies that began with The Broadway Melody (1929), The Broadway Melody of 1936 (1935) depends on a familiar combination of thin show business plot and upbeat musical numbers, both elements that reliably appealed to Depression Era audiences. For many modern viewers, these lightweight entertainments might seem unbearably corny and naive, but their cheerful reliance on pluck and stardust makes them great antidotes to the rainy day blues. The Broadway Melody of 1936 has particular appeal for fans of the very talented Eleanor Powell, a favorite among musical devotees, but it also offers fun performances from beloved stars like Robert Taylor, Jack Benny, and Una Merkel, as well as the screen debut of a strikingly young - and limber - Buddy Ebsen.

The story begins with two seemingly distinct elements, connected by their relationship to Taylor’s character, with Jack Benny running a slapstick comedy and Eleanor Powell doing a Ruby Keeler new kid in town routine with heavy romantic undertones. The surprise comes when Powell jumps enthusiastically into Benny’s territory and turns the last third of the narrative into a screwball comedy; her scenes as the fictitious Mademoiselle Arlette, complete with outrageous French accent, are really very funny, and she certainly looks better in the blonde wig than Benny’s long-suffering sidekick, Sid Silvers. Adding to the picture’s comedic bent are Una Merkel as Gordon’s sharp-witted secretary and Buddy Ebsen as a young hoofer who becomes one of Irene’s new friends. Ebsen’s real life sister, Vilma, makes her one and only screen appearance as the sister of his character.

The musical numbers, written by Nacio Herb Brown and Arthur Freed, are the movie’s highlights, especially when Eleanor Powell’s fantastic tap dancing accompanies them. Fans of Singin’ in the Rain (1952) will recognize “You Are My Lucky Star” and “Broadway Rhythm,” both of which are prominently featured in this earlier film. Buddy and Vilma Ebsen perform the charming “Sing Before Breakfast” number as well as a later song that is part of Bob Gordon’s show, and in both segments Ebsen gets to demonstrate the distinctively comic style of his dancing technique. Ebsen was 27 when he made the movie, but he looks like such a kid in his Mickey Mouse sweater that it’s hard to recognize him as the future Jed Clampett and Barnaby Jones. Popular singer and actress Frances Langford appears in the movie as herself and performs “I’ve Got a Feelin’ You’re Foolin’” as well as several other songs.

Broadway Melody of 1936 won an Oscar for Best Dance Direction and scored additional nominations for Best Picture and Best Original Story. Its director, Roy Del Ruth, also worked with Eleanor Powell and Buddy Ebsen on Born to Dance (1936) and Broadway Melody of 1938 (1937). For more of the glorious Eleanor Powell, see Honolulu (1939), Broadway Melody of 1940 (1940), and Lady Be Good (1941). You’ll find Robert Taylor in A Yank at Oxford (1938), Waterloo Bridge (1940), and Ivanhoe (1952). Jack Benny provides more laughs in Charley’s Aunt (1941) and To Be or Not to Be (1942), while Una Merkel, a veteran of the Pre-Code Era and a terrific comedienne, gives an especially hilarious performance in Destry Rides Again (1939). For more of Buddy Ebsen’s varied career, check out his movies with cowboy star Rex Allen, including Silver City Bonanza (1951) and Utah Wagon Train (1951).

Broadway Melody of 1936 is currently available for streaming on Warner Archive Instant, along with several other Eleanor Powell pictures.
Posted by Jennifer Garlen at 11:08 AM