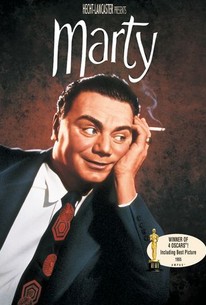 Somehow I've managed to miss seeing Marty (1955) in my classic movie viewing up until this month, when I happened to find it hidden in the depths of the Prime streaming catalog on Amazon. I'm glad I finally discovered it, though, because this modest romantic drama is as sweet and compelling a picture as one could possibly want in troubled times. At only 90 minutes long, it's the shortest movie ever to win the Academy Award for Best Picture, but it packs those minutes with feeling in its story about a lonely butcher (Ernest Borgnine) who finds a chance at love with a shy teacher (Betsy Blair) who has also been unlucky at romance. Directed by Delbert Mann, this low-budget gem collected eight Oscar nominations and won four, with Best Director, Best Actor, and Best Screenplay in addition to the Best Picture win.
Borgnine takes the title role as Marty, a 34 year old butcher in New York whose numerous siblings have all already married and started families. Marty's old-school Italian mother (Esther Minciotti) harangues him about finding a wife of his own, but Marty's friends are only interested in conventionally attractive women who won't give Marty the time of day. Depressed about the prospect of living the rest of his life alone, Marty nonetheless ventures out to a ballroom with his friend, Angie (Joe Mantell), where he sees a heartless date ditch plain Clara (Blair) after judging her to be a "dog." Marty steps in with sympathy, and a romance blossoms between the two, but Marty's friends and family prove to be less excited about his choice than he might have expected.
With its humdrum middle class working world and plain protagonists, Marty is a welcome antidote to swoony romances of impossibly beautiful people meeting on elegant transcontinental cruises or in the streets of Paris. It doesn't try to throw a veneer of glamor over its situations or its characters, but it does examine the unrealistic ideals that both men and women, but women especially, are held to in order to be deemed worthy of love. Marty's friends are constantly leering at girlie magazines and talking about the "dames" who appear in Mickey Spillane novels, and it's clear that they have internalized the messages from those mediums. Marty might also have been looking for love in the wrong places by following their lead, and when he finds a kind, smart young woman who takes an interest in him, both his friends and even his mother are quick to criticize her for not being beautiful. Marty has to push back against that criticism and recognize the value of the opportunity that Clara represents or else risk losing it forever.
The performances by Borgnine and Blair draw us into sympathy with each of them and suggest a lot more than they actually show, which makes the short movie equal far more than the sum of its minutes. When Clara reacts negatively to Marty's awkward play for a kiss, we understand intuitively that she's frightened because she has probably never been kissed before, while Marty - still struggling with the old, bad examples that have been presented to him - opts for ardent aggression when gentleness is required. As newcomers to romance they have to stumble through their mistakes and doubts toward one another, but it's delightful to see them open up, laugh, and connect over their long first night together as they wander from place to place. Neither of them is beautiful in the classic sense, but their yearning toward one another is exquisitely so, with Clara's silent tears near the end as moving and heartbreaking as any you'll see on film.
Marty originally aired as a 1953 televised play starring Rod Steiger in the lead; online and DVD versions of that production are available if you want to compare the two. The big screen remake was the first film for director Delbert Mann, whose later work includes Desire Under the Elms (1958), That Touch of Mink (1962), and Fitzwilly (1967). Ernest Borgnine, who continued working right up until his death in 2012, can be found in films and TV series all over the place, including Johnny Guitar (1954), Bad Day at Black Rock (1955), McHale's Navy (1964), The Dirty Dozen (1967), The Wild Bunch (1969), and Escape from New York (1981). Look for Betsy Blair in Another Part of the Forest (1948) and The Snake Pit (1948); her career stalled after she was blacklisted, but she got the role in Marty thanks to the demands of her husband at the time, Gene Kelly, who was able to insist that the studio use her.
Posted by Jennifer Garlen at 2:39 PM No comments: