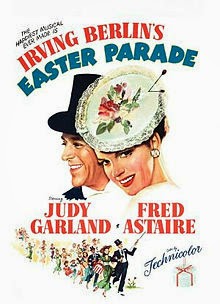 This colorful MGM musical includes all the bonnets and fancy new outfits one might expect from a movie called Easter Parade, but the chief attraction of the 1948 film is the pairing of two of the genre’s biggest stars, Fred Astaire and Judy Garland, as a song and dance team trying to make it big in the Ziegfeld era. The Irving Berlin tunes and supporting performances from Ann Miller and Peter Lawford also make Easter Parade a memorable springtime confection, although like most sweets - and Fred Astaire musicals - it’s a little light on substance. If, however, you’re looking for an antidote to the heavy religious epics that often dominate the Easter movie lineup, then Easter Parade is a perfect choice, a light, bright romantic romp bursting with humor and style.

Astaire pays famous hoofer Don Hewes, whose Easter celebration is cut short when his partner, Nadine (Ann Miller), announces that she’s leaving for a solo career. Determined to win Nadine back by showing her that he doesn’t need her, Don sets out to make a successful partner of the next girl he meets, who happens to be novice dancer Hannah Brown (Judy Garland). Don’s friend, Johnny (Peter Lawford), promptly falls for Hannah, but Hannah pines for Don, while Don still harbors feelings for Nadine. As one Easter gives way to the next, the performers see their careers take off, but their romantic lives remain stalled, especially after a jealous Nadine makes a public play for Don’s attention.

Two very different partners give Fred Astaire a chance to change pace in the film’s dance numbers. Ann Miller is the more powerful and assertive dancer of the two leading ladies, but Judy Garland excels at light comedy bits like “We’re a Couple of Swells” and the Vaudeville montage sequence. As singers, Miller brings the sex appeal with “Shakin’ the Blues Away,” while Garland pulls out the pathos in her rendition of “Better Luck Next Time.” Astaire’s solo performances are also a lot of fun, especially the “Drum Crazy” piece in the toy store, where Don distracts a rival customer from a stuffed Easter bunny by dancing with a whole collection of brightly painted drums. Of course, the earworm of the lot is “Easter Parade,” which you might well end up crooning for days once you hear Garland sing it.

The plot serves mostly to string the musical segments together, which helps to explain why we get so little resolution about what happens with Nadine and Johnny at the end. Astaire’s character seems headed into Pygmalion territory early on, but he realizes his mistake and stops trying to make Hannah into another Nadine, so the only remaining tension depends on the characters’ misplaced affections. Ann Miller’s stage diva is the closest thing the story has to an antagonist, but it’s really very hard to dislike her when her performances are so delightful. Nadine is shallow, uses dogs as fashion accessories, and hopes that Don and Hannah will be a flop, but Hannah imagines Nadine as much more of a threat than she really is. The handsome, young Peter Lawford ought to give the much older Astaire more competition for the heroine’s attention, but as likable as he is Lawford lacks the charisma that makes a short, balding, middle-aged dancer one of Hollywood’s greatest stars.

Be sure to appreciate the screen debut of Jules Munshin as the hilarious headwaiter; he would go on to star with Gene Kelly in Take Me Out to the Ballgame (1949) and On the Town (1949). Director Charles Walters worked with Astaire again in The Barkleys of Broadway (1949) and also directed Garland in Summer Stock (1950). Although Easter Parade is the only true pairing of Fred Astaire and Judy Garland, you’ll find both of them in separate numbers in Ziegfeld Follies (1945). See more of Peter Lawford in Good News (1947), Little Women (1949), and Royal Wedding (1951), which also stars Fred Astaire.
Posted by Jennifer Garlen at 2:38 PM