The Failure of Fathers in STRANGER THINGS 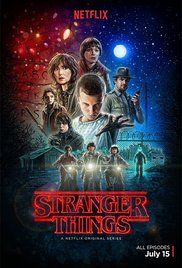 Warning: This essay contains spoilers! Read at your own risk.

The Duffer Brothers' 2016 Netflix series, Stranger Things, takes its cues from a bevy of 80s movies, most notably the films of Steven Spielberg and screen adaptations of the works of Stephen King. The mix also includes iconic pictures from the horror, science fiction, and teen genres like Alien (1979), A Nightmare on Elm Street (1984), and the films of John Hughes. The television series reflects the culture of the 1980s as seen through the lenses of these pictures, creating a strong sense of nostalgia for Gen Xers in particular, who were the same age as the show's characters during the era depicted in the series. As a kind of period piece, Stranger Things offers us a chance to look back at the 1980s and consider its essential themes, from Cold War paranoia to the initial rise of geek culture as embodied by Dungeons & Dragons. One of the most telling themes incorporated into the series is the breakdown of the traditional nuclear family and the normalization of divorce, especially as those issues relate to absent or failed father figures in the lives of the children and teens. In fact, while Stranger Things depicts a number of father characters, almost none of its fathers manage to live up to the obligations of paternity, and substitute father figures must stand in to provide guidance and protection to the four young boys who function as the show's core characters.

The series focuses on a group of 12 year old friends who stumble into a bizarre government conspiracy after one of them disappears. Will Byers (Noah Schnapp) vanishes from the small town of Hawkins, but his mother, Joyce (Winona Ryder), soon suspects that her son is both alive and held captive in some mysterious place, where he communicates with her by flashing electric lights. While the friends conduct their own search for Will, Joyce enlists the help of police chief Jim Hopper (David Harbour), who becomes convinced that a government lab near the town is connected to Will's disappearance. The boys unexpectedly find Eleven (Millie Bobby Brown), a girl whose strange abilities and sudden appearance link her to both Will and the secretive lab. Meanwhile, the teen siblings of two of the boys discover more clues to the mystery and realize that a bloodthirsty monster is also involved.

The four boys at the center of the story are Will Byers, Mike Wheeler, Dustin Henderson, and Lucas Sinclair. Only two of the four are shown to have fathers at all: Will has an absent, divorced father named Lonnie, while Mike has an older, sedentary father who spends a lot of his time sleeping in a Lazy Boy chair. We never see the fathers of Dustin and Lucas at all, although we can infer from the series that Lucas has a father who is a veteran of the war in Vietnam. Neither Lonnie nor Ted Wheeler can be called a good father in any meaningful sense, although Ted's failures are more sins of omission than anything else. Lonnie takes no interest in Will or older son Jonathan, and his ex-wife, Joyce, asserts that Lonnie used to deride Will as a "fag" before the parents broke up. When Lonnie does return after Will's disappearance, he turns out to be interested only in suing the quarry where Will's body was supposedly found; he doesn't actually care about his missing/dead son. Ted, who is still married to Mike's mother, Karen, and clearly has a good job, seems like a better father on the surface, but he has no emotional connection to his three children and doesn't seem to understand them at all. While Karen doggedly tries to earn the trust of both Mike and older sister Nancy while constantly caring for toddler Holly, Ted merely works and sleeps. He doesn't know how to talk to his children, doesn't seem to interact with them, and is shown in the last episode to be the only person sleeping in a hospital waiting room full of otherwise worried characters. If Lonnie is the stereotypical deadbeat dad of the 80s, then Ted is the stereotypical dad of the 50s and 60s, who leaves all the domestic and emotional work of parenting to his wife. Neither is the kind of father a child wants or needs, especially a boy on the cusp of adolescence.


Even worse than Lonnie and Ted is the manipulative Dr. Brenner, who adopts a paternal facade in his relationship with Eleven. Dr. Brenner is not the girl's real father, and no hint of a biological father's identity is provided, but he trains Eleven to call him "Papa" and to think of him as a parental figure. Lonnie and Ted are neglectful, emotionally distant fathers, but Brenner is actively evil and abusive. He encourages Eleven to rely on him, to obey him, and even to fear him, but he repeatedly hurts her and endangers her for his own ends. Part of Eleven's psychological journey in the series is her realization of Brenner's essentially bad nature and her ultimate decision to reject him. A stark contrast is provided for Eleven in the way that Brenner has treated her versus the way Joyce treats her in the seventh episode, "The Bathtub." Brenner has pushed Eleven to do dangerous things simply because he wants the power and knowledge, but Joyce asks Eleven to take risks to save her son. Joyce thanks Eleven for her bravery but also reassures her, holds her, and supports her, while Brenner dumps Eleven into the lab's sensory deprivation chamber and leaves her to confront the monster alone. Joyce's maternal behavior is utterly alien to Eleven; the scenes in the lab always show her surrounded by emotionally blank male scientists, with only Brenner's insidiously abusive relationship as a gross perversion of parenthood. Nonetheless, Joyce's brief relationship with Eleven clearly has a huge impact on the girl and helps her see the truth about Brenner. The last word she says to him is "bad," and the look on his face tells us that he understands that his hold over her has been broken.


Somewhere in the middle of the set we find Jim Hopper, the emotionally damaged police chief. Hopper has been a good father; we see that demonstrated in flashbacks of his daughter, Sarah. Tragically, Hopper's daughter contracted a terminal illness; her death destroyed his marriage, drove him to self-destructive habits, and closed him off emotionally until Will's disappearance resurrects his paternal instincts. Hopper was such a devoted father that the loss of his child wrecked him; it's clear that embracing the role means accepting the risk of loss and heartbreak. As he searches for Will, Hopper begins to revisit his grief and simultaneously regain his ability to be a strong father figure, even though the child he tries to help is generally unaware of his efforts. Trapped in the Upside Down, Will doesn't know how dedicated Hopper has become to finding him, but we see how Hopper adopts the paternal role that has been callously vacated by Lonnie, not only toward Will but toward Jonathan, as well. Hopper also takes the domestic role in relationship to Joyce, becoming her partner and emotional support. Despite his courage and resolution on Will's behalf, Hopper does not become an ideal father figure. He makes a Faustian bargain with Brenner to get Will back, one that directly endangers Eleven, so his paternal urge is limited in its scope. He is willing to trade one endangered child for another, even though he has learned that Eleven's mother never stopped trying to find her. It's ironic, on some level, that Hopper is willing to sacrifice the life of a girl to save a boy, given that he was himself the father of a daughter. He does, however, reach out to her in the series' coda, leaving food for her in a box in the woods. It might be too late - the show leaves us with a lot of questions about Eleven's fate - but at least Hopper continues to move back toward the role he once filled.

The absence of real fathers, whether physical or emotional, leaves the role to be filled by substitutes. Hopper becomes one surrogate father, albeit one with serious issues of his own, but other characters also volunteer themselves for the job. Will's older bother, Jonathan, steps in to fill the gap left by Lonnie, even though Jonathan still needs a father figure himself. Jonathan goes to school, works, helps to care for Will, and cooks for the family; he functions as a model for a newer, more invested kind of fatherhood that more closely resembles the multi-tasking required of mothers. He nurtures and supports Will, teaching him about music and bonding with him; Jonathan is the one who knows how to find Will's friends using the two-way radios. When Will goes missing, Jonathan searches for him and openly grieves; he is more in touch with his emotions than any of the previous generation of father figures. Jonathan and Nancy become younger parallels of the partnership embodied by Hopper and Joyce, both active, dedicated, and defined by their devotion to someone else. Jonathan's willingness to accept this burden makes us prefer him to Nancy's love interest, Steve, who is selfish and immature in comparison. The science teacher, Mr. Clarke, is also a surrogate father figure, although his role is less emotionally involved. All four boys have a close relationship with him; he provides them with the intellectual nurturing they cannot get at home and even tries to offer some emotional support after Will's disappearance. Ironically, Brenner's lab uses Clarke's dedication to the boys as a way to locate them; they pretend to be looking for talented science students for a fictitious state club. Clarke has no idea that he's actually betraying his favorite students to their enemies, but he - again unwittingly - makes up for it when he helps them design a sensory deprivation chamber for Eleven, even though it's Saturday night. Although the boys lack actual fathers in their lives who fulfill their parental obligations, the show depicts hope in the form of those who willingly take on such burdens, whether they are authority figures, male relatives, or teachers. If Mike, Will, Dustin, and Lucas become good men in their turn, it's because of characters like Hopper, Jonathan, and Mr. Clarke, not the men who sired them.

Stranger Things offers a dense narrative with many threads worth pursuing, especially in terms of its relationship to the culture of the 1980s, but the failure of fatherhood certainly seems to lie close to its heart. While mothers are generally shown as loving, dedicated figures - not only Joyce, but Karen Wheeler and even Terry Ives - fathers are seen as deeply flawed. They are absent, uninterested, clueless, or even cruel. They leave young boys to fend for themselves in a dangerous and uncertain world, even as the rules for what it means to be a man are in flux. They treat girls as things and betray them to suffering and peril. Still, there is hope. Where some men rush to vacate their roles as fathers, others step in. It will be interesting to see if Stranger Things revisits these themes with a second season or offers us a glimpse of the ways in which the four boys mature to become the fathers of another generation.
Posted by Jennifer Garlen at 3:35 PM