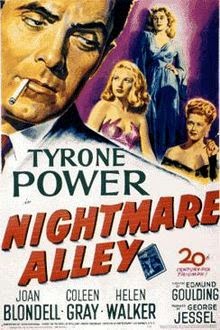 Tyrone Power is best remembered today as a swashbuckling hero, but in Nightmare Alley (1947) the star gets to revel in his darker side, using his good looks and intense charisma to chilling effect as a callous heel whose con games inevitably catch up with him. Directed by Edmund Goulding, this classic film noir bursts with shady characters and seedy ambiance; no setting could be better suited to the fatalistic shadow play of the genre than a two-bit traveling carnival, with its losers, crooks, and abject sideshow freaks. Joan Blondell, Coleen Gray, and Helen Walker give solid performances as the trio of women who shape Power’s protagonist, but it’s Power himself who dominates the show in a role he truly was made for.

Power plays ambitious carny Stan Carlisle, who hopes to become a big time performer with the help of middle-aged mentalist Zeena (Joan Blondell). When Zeena’s alcoholic husband dies, she gives Stan the break he wants, but Stan uses the opportunity to quit the carnival and take his naive young bride, Molly (Coleen Gray), with him. Stan’s fame and fortune rise, but he courts disaster when he falls in with a beautiful psychologist (Helen Walker) who encourages him to begin a dangerously complicated con.

Power gives an electrifying performance as Stan. His handsome features here take on a dissipated edge, with crow’s feet crinkling around his hungry, burning eyes. We know from the start that Stan is no good, but Power makes him more anti-hero than true villain, a small-time guy whose ambition is always too big for him. Stan uses everyone he meets, especially the women, but he surprises us and perhaps himself, as well, when it turns out that he really does love Molly. His young wife’s refusal to carry out his cynical deception is not a betrayal of Stan but an expression of her own innate goodness; we expect him to be furious with her, but instead he rushes to get her out of harm’s way, leading to a brief, tender moment of farewell. In many noir films, a good girl like Molly can be as much the protagonist’s undoing as the femme fatale, but the final scene suggests that in this case Molly might yet be Stan’s saving grace. Power’s character walks a fine enough moral line that we want to see that glimmer of hope at the end, even as we relish Stan’s much-deserved fall.

Noir generally deals in the workings of fate, but in Nightmare Alley the theme has special significance. The turning of Fortune’s wheel is represented as inevitable, irresistible, and grimly ironic. When we first meet Stan we find him both fascinated and horrified by the carnival geek, a poor sap fallen so low that he’ll bite the heads off of live chickens for a bottle of booze and a place to sleep. Throughout the film, Stan’s moments of crisis are punctuated by the remembered screams of the geek; we know, as Stan himself does, that this fate waits for him as surely as death waits for us all. Zeena’s Tarot cards confirm that Stan must take his place as the hanged man, the heir to Zeena’s doomed husband and the geek, as well. In the world of carnival noir, the characters’ belief in Tarot is never merely superstition; the cards reveal the truth about a world controlled by fate. Only a fool like Stan tries to fight it. His last line in the film, “Mister, I was made for it,” is both an ironic echo of his earlier ego and a signal that Stan finally accepts the card he has been dealt.