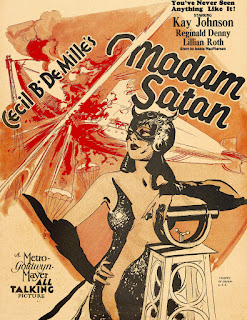 Cecil B. DeMille's 1930 musical extravaganza is hard to classify in terms of genre and even harder to describe in terms of sheer spectacular weirdness, but Madam Satan is one of those Pre-Code pictures you really need to see for yourself in order to appreciate the extent to which it revels in a "more is more" approach to cinema. Slow and creaky at times, especially in the early stages, it switches into high gear for a third act that more than makes up for its flaws, with a wild costume party aboard a floating Zeppelin and a full throttle descent into passion, chaos, and disaster. It's not the pinnacle of DeMille's oeuvre, but it certainly showcases the director's taste for excess, and Kay Johnson is a delight once she abandons her role as martyred wife to become the titular - and titillating - Madam Satan.
Johnson plays the much put upon Angela Brooks, a loyal and respectable wife to the wealthy but utterly unreliable Bob (Reginald Denny). Angela turns a blind eye to most of Bob's failings, but when she discovers his infidelity with the gold-digging Trixie (Lillian Roth) she decides first to leave him and then to fight to get him back. Angela uses a lavish costume party thrown by their friend Jimmy (Roland Young) as an opportunity to disguise herself as the worldly and seductive Madam Satan in order to lure Bob back into her arms. Fate, however, has a shock in store, as a violent storm pitches the Zeppelin and its occupants into peril.
We should probably agree up front not to take marital advice from 1930s Hollywood, which tends to advise injured wives to ignore spousal cheating and blame themselves for male infidelity. Madam Satan is squarely in this camp, with Angela accused of causing Bob to stray by acting like an adult in a serious relationship. To a modern viewer it's clearly Bob who ought to change his irresponsible party boy behavior, and I admit to being a little disappointed that Angela doesn't shoot him or push him out of the collapsing Zeppelin (who would have known? It would have been the perfect murder!). It's a mystery to me why she wants him back at all, but that's the goal that drives the rest of the picture, with the literally angelic wife, Angela - get it? - having to become a sexy devil in order to coax her wayward husband back into the marital fold.
As tiresome as that sexist ideology is, Angela does become a lot more entertaining when she stops crying over her idiot spouse and shows up at the Zeppelin shindig ready to gyrate her way into his heart, if his heart is actually involved in this scenario at all. The picture is loaded with innuendo and double entendre to remind us which of Bob's organs Angela is really supposed to capture. The costume party, which is basically an orgy of excess, is a perfect setting for this effort, with scantily clad women, leering men, an auction of sexy ladies, and a bizarre musical number about electricity that might be the result if Tesla had directed porn. Johnson really revels in the Madam Satan persona, and she and Lillian Roth engage in such spirited combat that the male actors just fade into the background. It's a shame, really, when Angela reveals her identity to Bob and goes back to being the love starved wife desperate for attention from a man who doesn't deserve her, but the ending suggests that a bit of the devil in Angela has come to stay.
For a comparison of Madam Satan with DeMille's other work in the early 1930s, see The Sign of the Cross (1932), or go straight to The Ten Commandments (1956) for his final towering achievement. You'll find Kay Johnson in Thirteen Women (1932), Of Human Bondage (1934), and Son of Fury (1942), while Reginald Denny, whose film career began in 1915, also appears in Of Human Bondage as well as Romeo and Juliet (1936), Rebecca (1940), and a number of the Bulldog Drummond films as Algy Longworth. Look for Lillian Roth in Animal Crackers (1930) and Ladies They Talk About (1933), but be sure to take note of I'll Cry Tomorrow, the 1955 biopic starring Susan Hayward that chronicles Roth's struggles with alcoholism. Roland Young is probably best remembered for the title role in the Topper films, but he's also very funny as Uncle Willie in The Philadelphia Story (1940).
Posted by Jennifer Garlen at 7:28 PM No comments:

Night of the Living (LEGO) Dead!

We're still in the grip of this endless pandemic, so I've been spending a lot of my time with my massive LEGO collection, where my love for classic horror movies often provides inspiration. Here's a zombie horde that would make George A. Romero happy! The zombie cheerleader is one of my all-time favorite LEGO figures.
If our real world viral catastrophe has you bored and stuck at home this summer, escape to the gruesome fun of classic zombie movies like White Zombie (1932), I Walked with a Zombie (1943), or Night of the Living Dead (1968). Masks won't help, but you'll definitely want to keep at least six feet between you and the walking dead!
Posted by Jennifer Garlen at 1:52 PM No comments: