FUNNY: THE BOOK by David Misch 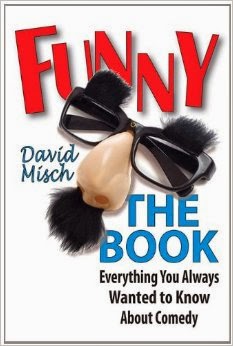 David Misch, a TV and movie writer whose work includes Mork & Mindy, Duckman, and The Muppets Take Manhattan (1984), is a big fan of classic movie comedies, which shows in his book-length contemplation of comedy, Funny: The Book (2012). Although not targeted specifically at classic movie fans, Funny: The Book certainly has plenty to keep those readers entertained, but it also ranges far and wide across human history to ponder the nature of humor, even taking in biology, religion, Lenny Bruce, and existentialist philosophy. The result is a book that is thought-provoking, educational, and, yes, funny, and it really ought to appeal to anyone who wants to take comedy a little more seriously.

Misch devotes whole sections of his book to personal favorites like The Marx Brothers and Buster Keaton, but classic movie references and discussions pop up in every chapter (the caption beneath one photo of Edward G. Robinson in Little Caesar made me laugh, but of course it's only funny if you recognize Robinson and the role he's playing). Bob Hope, Jack Benny, Milton Berle, Charlie Chaplin, Harold Lloyd, Mae West, and Laurel & Hardy all make appearances, as well. Even chapters that are really about more recent comedians and other genres reveal Misch's interest in and knowledge of classic film.

Cinephiles with a looser definition of "classic" will particularly enjoy chapters about Steve Martin, Woody Allen, and Richard Pryor, while those who also keep up with current media will appreciate the discussion of The Office. The academically inclined will approve of Misch's efforts to cover ancient history, mythology, the Jungian concept of the Trickster, and even the physiological aspects of humor. Misch manages to incorporate a lot of intellectual material into the book in a way that makes it painless and even entertaining to absorb.

If you happen to be familiar with Charlene Fix's 2013 book, Harpo Marx as Trickster, you will definitely find an interesting parallel in Misch's work, since both books cover the Trickster archetype and the Marx Brothers as embodiments of it, although each author explores the idea in a unique way. Those who enjoy Misch's chapter on Buster Keaton should also check out Buster Keaton's Silent Shorts: 1920-1923 by James L. Neibaur and Terri Niemi, which goes into more detail about Keaton's particular style of comedy. Edward McPherson's 2007 biography, Buster Keaton: Tempest in a Flat Hat, would also make a very good follow-up selection.

Personally, I really enjoyed Funny: The Book, and it prompted me to think about the classic movie comedies I love and why they make me laugh. I was particularly inspired to ask other people what movies they thought were funny and why, and there might well be an upcoming blog post on that topic.

To sum it all up - If you read Funny: The Book, be prepared to laugh out loud and think deeply at the same time.

Note: The publisher provided me with a free review copy of this book. No promise of a positive review was made or expected in exchange for this courtesy.
Posted by Jennifer Garlen at 12:11 PM