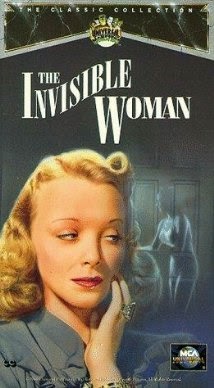 Unlike the earlier invisible man movies, The Invisible Woman (1940) leaps right out of the horror genre and lands in screwball comedy, with the feisty Virginia Bruce leading a cast of particularly eccentric characters on a merry romp through mischief and romance. The tonal shift might disconcert those looking for a true follow-up to James Whale’s 1933 chiller, but The Invisible Woman works surprisingly well as a comedy, and the special effects contribute to the fun, this time with a lot of naughty winks about a naked young lady parading around. Fans of classic comedy will also appreciate the performances of great supporting players like Charles Ruggles, Oskar Homolka, Margaret Hamilton, and Shemp Howard, but the hammy highpoint is John Barrymore as the decidedly theatrical inventor of the invisibility machine.

Virginia Bruce plays disgruntled dress model Kitty Carroll, who agrees to become invisible in order to get revenge on her nasty boss, Mr. Growley (Charles Lane). She disappoints Professor Gibbs (John Barrymore) by running off before he can exhibit her to his sole financial backer, Richard Russell (John Howard), so the pair have to pursue Russell to his remote lodge in order to prove that the machine works. Meanwhile, an exiled gangster named Blackie (Oskar Homolka) sends his thugs after Gibbs and the machine so that the homesick crook can sneak back into the United States.

Bruce spends a lot more time being visible than either Claude Rains or Vincent Price had done in the earlier movies, but she projects enough saucy personality in her voice to carry the invisible sequences. Like most screwball heroines, her protagonist baffles and thwarts the men around her, but Kitty gets to do it while naked and invisible, which makes her especially intriguing to John Howard’s wolfish socialite, Richard, who thinks he has seen everything when it comes to young ladies. Kitty is a fun, bold character, never a victim and always in control of the situation, even when the gangsters kidnap her and Professor Gibbs. If the earlier invisible men found a power that bred madness in their transformation, Kitty finds a power that is liberating and long overdue.

The rest of the cast is full of top-notch talent, with Barrymore stealing scenes for all he’s worth as the loopy, bombastic Professor, who comes off like Frank Morgan’s long lost brother. John Howard, well-known to audiences in 1940 as the star of the Bulldog Drummond movies, is charming as Richard, even if his part mostly consists of reacting to the nuttier characters around him. Veteran comedian Charles Ruggles gets laughs as the long-suffering servant, George, who keeps trying to resign from Richard’s employ but never actually goes, and Margaret Hamilton is very effective as the Professor’s prickly housekeeper, although we don’t see her often enough. Oskar Homolka puts his crazy eyebrows to good use as the gangster boss, while Shemp Howard and Donald McBride clown around amusingly as his utterly inept thugs. All of these players know exactly how to make their characters memorable and interesting to the audience, which helps to explain why such a silly picture is so much fun.

Like The Invisible Man Returns (1940), The Invisible Woman earned an Oscar nomination for Best Special Effects. A. Edward Sutherland, who directed The Invisible Woman, also made the 1928 version of Tillie’s Punctured Romance starring W.C. Fields, but during the silent era Sutherland had been an actor himself. See more of Virginia Bruce in The Great Ziegfeld (1936) and Born to Dance (1936), and catch John Howard in The Philadelphia Story (1940) and The Undying Monster (1942) for more of his roles after the Bulldog Drummond run. John Barrymore gives more comic performances in Twentieth Century (1934) and Midnight (1939), while Charlie Ruggles appears in Ruggles of Red Gap (1935) and Bringing Up Baby (1938). Look for Oskar Homolka in Sabotage (1936), Ball of Fire (1941), and I Remember Mama (1948), the last of which brought him an Oscar nomination for Best Supporting Actor.
Posted by Jennifer Garlen at 10:32 AM