Released in 1945, House of Dracula is one of the many monster movie sequels that Universal churned out in an effort to keep audiences coming back for more of their favorite fiends, and, like Frankenstein Meets the Wolf Man (1943), House of Frankenstein (1944), or the later Abbott and Costello Meet Frankenstein (1948), this picture takes a “more is more” approach to its monsters. This particular mad monster party has some intriguing components, but it squanders its potential with a disastrous third act that doesn’t so much end as simply stop. Up until that frustrating finale, the picture has its appeal, especially in the performance of John Carradine as a thin, hypnotic Count and the creative twists applied to the mad doctor and hunchback staples. 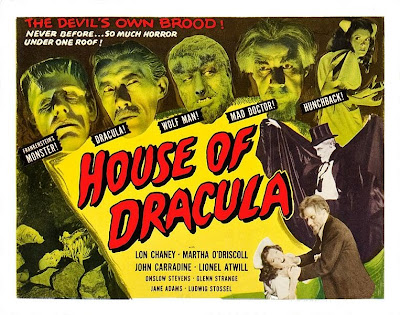 Onslow Stevens stands at the center of the action as the good Doctor Edelmann, who is approached first by Dracula (John Carradine) and then by Larry Talbot (Lon Chaney, Jr.) for cures to their unique conditions. Dracula, as it turns out, really only wants to get close to Edelmann’s attractive nurse, Miliza (Martha O’Driscoll), and Edelmann pays a terrible price for trying to cure the vampire, even as his efforts to help Larry seem more hopeful. Edelmann also discovers the Frankenstein’s creature (Glenn Strange) in the caves beneath his castle, but his hunchbacked assistant, Nina (Jane Adams), repeatedly warns him against resurrecting the monster.

As the ostensible protagonist of the story, Onslow Stevens makes a good showing, especially during his Jekyll and Hyde moments later in the picture. Stevens is not particularly well-known today, but he worked a long and prolific career in film and television, and in Edelmann he has a role that allows him to play with many classic horror types at once. Edelmann is both Van Helsing and Victor Frankenstein as well as Jekyll and Hyde, a good man who resists evil until he is tragically overcome by it. His approach to the monstrous makes House of Dracula as much science fiction as horror; Edelmann treats vampirism as a blood condition and uses transfusions to combat it, although his treatment of lycanthropy proves far more successful, in part because Dracula doesn’t really to be cured, while Larry is ready commit suicide if he can't find a way to escape his werewolf curse.

The monsters, as usual, have the most fun here, with John Carradine leading the charge as an effective incarnation of the famous Count. Carradine has the mesmerizing eyes needed for this role, and the screen makes the most of them with several close-up shots. He doesn’t bother with a fake foreign accent, but his deep voice carries notes of aristocratic culture and seductive menace nonetheless. Dracula’s inevitable death scene begins the series of bad endings that plague the second half, but the Count still manages to make his influence felt beyond the grave. Lon Chaney, Jr. is back in familiar territory with his Larry Talbot role, which he wears as comfortably as a favorite suit, and we get some fun transformation sequences with lots of hair and teeth. Glenn Strange, however, has very little to do as the creature, whose few scenes are sometimes borrowed from earlier films with other actors in the makeup. As the love interest of both vampire and werewolf, Martha O’Driscoll is pretty but a bit flat, especially in her trance scenes with Dracula, and Jane Adam’s hunchbacked Nina proves a far more interesting female character. The abrupt ending that literally brings down the house on these characters is especially unfair to Nina, who ought to have a much better final moment than the throwaway treatment she receives.

Be sure to notice Lionel Atwill in one of his last screen roles as the police inspector. Erle C. Kenton, who directed House of Dracula, also headed up the terrific Island of Lost Souls (1932) as well as The Ghost of Frankenstein (1942) and House of Frankenstein (1944). For more early but memorable performances by John Carradine, see Stagecoach (1939), The Grapes of Wrath (1940), and Blood and Sand (1941); the actor appeared in more than 300 films and television programs, including many cult horror classics as well as serious Oscar contenders. Lon Chaney, Jr. made his first appearance as Larry Talbot in The Wolf Man (1941), but he went on to play the character many times, and he also starred in other monster roles in Son of Dracula (1943) and The Mummy's Curse (1944).
Posted by Jennifer Garlen at 10:42 AM