Directed by Norman Z. McLeod and an uncredited Busby Berkeley, Lady Be Good (1941) provides a perfectly entertaining example of the sort of light musical romance that doesn’t get a lot of acclaim these days but still has plenty to offer to viewers who are just looking for a good time. With solid performances from favorite stars like Ann Sothern, Robert Young, and Red Skelton, and great dance numbers featuring the supremely talented Eleanor Powell, Lady Be Good combines the talents of a diverse cast to create a very watchable mix of romantic comedy and musical revue. Appearances by notable supporting players like Lionel Barrymore and Virginia O’Brien add to the movie’s appeal, as does the impressive acrobatic dancing of the fabulous Berry Brothers. 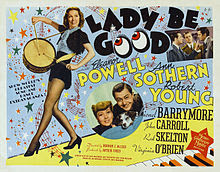 Ann Sothern stars as songwriter Dixie Donegan, whose musical success with partner Eddie Crane (Robert Young) creates problems in their romantic relationship. The two divorce, although Dixie still loves Eddie and continues to work with him on hit songs, including the chart topper, “Lady Be Good.” Dixie’s pal, Marilyn (Eleanor Powell), schemes to get Dixie and Eddie back together by making Eddie jealous of suave singer Buddy (John Carroll), but her plans backfire in a series of comical misunderstandings and confrontations.

The story of Lady Be Good might throw a few more curveballs than are strictly necessary toward the end, but the contrast between Dixie and Eddie’s working and romantic relationships is interesting for its progressive approach. There’s no question of either partner giving up a career; these two need each other professionally as well as personally, but Dixie worries that success is ruining Eddie by making him care too much about social status. He also takes Dixie for granted, which she rightly sees as a serious problem. Eddie’s inability to manage a household is a joke typical of the film’s era, but Dixie becomes furious when he calls her over to the apartment not to apologize for his behavior but to get her to hire new help and straighten up the place. Resolution is only possible when Eddie doesn’t think of Dixie as his wife, as the last lines of the film make clear.

The other cast members contribute mostly to the comical or musical elements of the picture, sometimes both at once. Lionel Barrymore makes a sympathetic judge for both of Dixie’s divorce hearings, and Red Skelton is affably funny as one of the couple’s friends. As Skelton’s invariably hungry girlfriend, Lull, Virginia O’Brien has few lines and only one real song, but she makes the most of what she gets, and her musical performances are always a hoot. The Berry Brothers get more opportunities to strut their stuff, including a segment of the big “Fascinating Rhythm” production number; they do some amazing physical feats and will appeal to fans of the similar - but not identical - Nicholas Brothers. Eleanor Powell gets the best of both worlds as Dixie’s loyal pal and a featured performer for the musical scenes. Her duet with the dog, Buttons, is absolutely adorable, and her finale number in “Fascinating Rhythm” showcases her ability to hold the screen as a solo dancer. Powell is no floating accessory to a male dancer’s show; she taps with all the exuberant energy of Gene Kelly or Fred Astaire, and if you haven’t seen her before then this picture offers an excellent introduction to her signature style.

Look for brief appearances by Phil Silvers and Dan Dailey, and stop to appreciate Tom Conway’s marvelous voice in his scenes as Dixie’s lawyer. Lady Be Good won the Oscar for Best Original Song for “The Last Time I Saw Paris,” although the catchier Gershwin title number will linger in the viewer’s ears long after the movie ends. For more of Ann Sothern, see A Letter to Three Wives (1949) and the many Maisie films; Sothern earned an Oscar nomination for Best Supporting Actress for her final screen performance in The Whales of August (1987). Robert Young also stars in Stowaway (1936), The Canterville Ghost (1944), and The Enchanted Cottage (1945). You’ll find Eleanor Powell in Broadway Melody of 1936 (1935), Born to Dance (1936), and Honolulu (1939). Red Skelton, Ann Sothern, Virginia O’Brien, and the Berry Brothers all reunite with director McLeod for Panama Hattie (1942), while Skelton, Powell, and O’Brien reteam for Ship Ahoy (1942).

Lady Be Good is currently available for streaming on Warner Archive Instant.
Posted by Jennifer Garlen at 5:22 PM