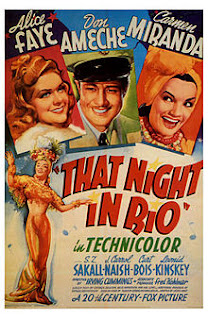 Don Ameche fans can get a double dose of the charismatic leading man in That Night in Rio (1941), a frothy musical romance costarring Alice Faye and Carmen Miranda. Directed by Irving Cummings, this South American story features Ameche playing not one but two characters, which drives a complicated plot of romantic substitutions and mistaken identity. Technicolor splendor enhances its lively musical numbers, and the supporting cast includes familiar character actors S.Z. Sakall, J. Carrol Naish, and Leonid Kinskey. Like many of the Fox musicals of the wartime era, That Night in Rio is a fun escape from the seriousness of real life, light on substance but rich with music and glorious color.

Ameche stars in a dual role as American entertainer Larry Martin and aristocratic ladies’ man Baron Duarte. When the baron lands in financial trouble and leaves town, his anxious colleagues hire Larry to impersonate him, but Larry uses the opportunity to flirt with the beautiful baroness, Cecilia (Alice Faye). Meanwhile, Larry’s jealous girlfriend, Carmen (Carmen Miranda), turns up at the baron’s estate and recognizes Larry in disguise. When the real baron returns, he and Larry take turns pretending to be one another, much to the confusion of the baroness.

With its jealous lovers and character doubles, That Night in Rio has something of the air of a Shakespearean forest romance, although it was actually adapted from a play called The Red Cat. Ameche certainly seems to be enjoying himself in both roles, and he’s particularly debonair as the Baron, replete with monocle and distinguished, silver-streaked hair. The set-up ensures that Ameche will get both girls by the film’s end, no matter how the pairings sort themselves out, or perhaps it ensures that each girl will get an Ameche, since the two women are pretty aggressive - if sometimes surreptitiously so - in pursuing their partners. Alice Faye and Carmen Miranda make good foils to one another; Faye’s cool blonde look and deep, dreamy voice contrast perfectly with Miranda’s hot Latin energy, and each has plenty of opportunity to shine in musical numbers. Miranda, however, definitely wins in the spectacle contest; few performers were ever more perfectly formed for Technicolor, and Miranda’s wild outfits and oversized personality practically leap off the screen during her songs.

The identical protagonists provide That Night in Rio with an excuse for lively visual hijinks to go along with its music and romance. When Larry and Baron Duarte appear together, the film indulges in fun effects shots that still look very convincing some 70 years later, although a few scenes are clearly using a stand-in actor for the character not facing the camera. One gag involves the baron, Larry, and a very confused J. Carrol Naish with a dressing screen around which the two men swap places. Reacting to the ongoing confusion are the very funny S.Z. Sakall and Curt Bois as the baron’s nervous associates, who get a lot more than they bargained for when they employ Larry’s unique services. Leonid Kinskey, whom viewers will recognize as Sascha in Casablanca (1942), appears as Pierre, an amorous Frenchman who hopes in vain to impress the baroness as a potential lover.

The Red Cat was also adapted by Hollywood as the 1951 film, On the Riviera, starring Danny Kaye in the double lead. For more of Don Ameche and Alice Faye, see In Old Chicago (1937), Alexander’s Ragtime Band (1938), and Lillian Russell (1940). Faye and Carmen Miranda both appear in Weekend in Havana (1941), The Gang’s All Here (1943), and Four Jills in a Jeep (1944). Irving Cummings also directed Ameche and Miranda in Down Argentine Way (1940); for more of his work, see the Shirley Temple films Curly Top (1935) and Little Miss Broadway (1938) or yet another Faye and Ameche picture, Hollywood Cavalcade (1939). Look for various combinations of the director and the three stars with other usual suspects like Betty Grable and Tyrone Power.
Posted by Jennifer Garlen at 3:36 PM