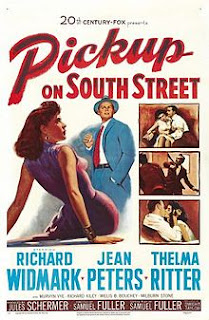 A favorite with film noir enthusiasts, Samuel Fuller’s Pickup on South Street (1953) features an odd combination of petty crime, espionage, and rough romance, with Richard Widmark and Jean Peters as two small-time losers who get caught up in a very big problem. The story and its characters are thoroughly noir but shaped by Fuller’s distinctive style. Morally ambivalent but surprisingly sensitive to its seedy protagonists, Pickup on South Street is also worth watching thanks to a knockout performance from Thelma Ritter, who earned an Oscar nomination for Best Supporting Actress for her role as Moe, a sympathetic snitch.

Jean Peters stars as tough girl Candy, who is unwittingly carrying microfilm for Communist spies when a pickpocket loots her purse on the subway. The thief turns out to be Skip McCoy (Richard Widmark), newly released from prison but already up to his old tricks. Jean’s ex-boyfriend, Joey (Richard Kiley), presses her to recover the film from Skip, which sends Candy to Moe (Thelma Ritter) for information. Meanwhile, the cops and government agents are tracking all of them in a desperate bid to keep the information from reaching its final destination.

Skip is a perfect character for Widmark, a noir veteran who excelled at playing shady crooks. Knowing the kind of guy Widmark tends to play, the savvy viewer waits to see if Skip has any decency in him or not. It could go either way. After all, by the time we see him as Skip Widmark had been Tommy Udo and Harry Fabian, but he had also played war heroes. Jean Peters also gives a terrific performance as Candy, a brazen, jaded girl who is still vulnerable enough to fall for Skip thanks to some electric charge that passes between them. The fierce look on Candy’s face tells us that she has seen the gutter before, and in Skip she recognizes a kindred spirit, even if he opens their romance by punching her out cold and robbing her multiple times. If their courtship has a brutal, even bestial quality, it has its tender side, too, as we see when Skip worries over Candy’s sore jaw and later reacts to the beating she takes from the enraged Joey.

Skip and Candy offer variations on familiar noir characters, but Thelma Ritter’s Moe is something else entirely. Noir does not generally play nice with its old women; most of them are shrill harpies or instant victims, not fully realized characters like the sad, pragmatic Moe. Peddling her ties and her information, Moe wants only to earn enough money to buy herself a proper burial spot, away from the ignominy of Potter’s Field. She has more heart than either of the younger protagonists, which they fail to appreciate until it’s too late, but her confrontation scene with Joey is as moving, tragic, and beautifully played as any scene in classic noir. Skip’s reaction to her fate becomes the measure by which we ultimately judge his character; it means much more than any lip service to abstract ideas like patriotism. Viewers might come to this film for Widmark, or Peters, or even Fuller, but they remember it for Thelma Ritter’s Moe.