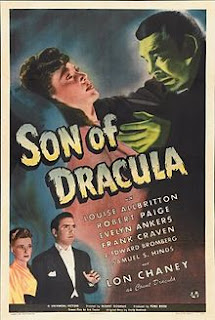 Lon Chaney, Jr., God bless him, had certain talents as an actor, but he was no man of a thousand faces like his chameleon father. The limits of the younger Chaney’s abilities come into plain view in Son of Dracula (1943), which badly miscasts the horror star as the iconic vampire (or his descendant, it’s never quite clear). Directed by Robert Siodmak and costarring Robert Paige, Louise Allbritton, and Evelyn Ankers, Son of Dracula never really takes off, although it does tempt the audience with its story of a morbid anti-heroine and increasingly unhinged hero.

Arriving under the pseudonym of Count Alucard, Chaney plays a vampire drawn to the swamps of the Southern United States by Kay Caldwell (Louise Allbritton), a lovely young woman with an unhealthy interest in the occult. Alucard promptly kills Kay’s elderly father, and Kay inherits the Gothic mansion where she and Alucard intend to take up their undead residence. Kay’s longtime boyfriend, Frank (Robert Paige), is horrified by her fascination with the count, and her sister, Claire (Evelyn Ankers), doesn’t know what to make of Frank’s wild-eyed reports that Kay has become an immortal monster. Only kindly Dr. Brewster (Frank Craven) and vampire expert Professor Lazlo (J. Edward Bromberg) suspect that Frank’s ravings really contain the truth about Alucard and his morbid bride.

Chaney is best remembered today for his performances as werewolf Larry Talbot, first in The Wolf Man (1941) and then in a number of sequels. As a tragic everyman, Talbot perfectly suits Chaney’s middle-class look and earnest demeanor, but Dracula is a completely different type. He embodies Old World privilege, seductive foreign influence, and dangerous sex appeal, none of which are conveyed by Chaney’s version of the character. His bulky, solid Alucard looks more likely to drink beer than blood, and his flat American accent makes his dialogue patently ridiculous. Chaney would play werewolves, mummies, and a variety of strange characters over the course of his career, but Son of Dracula would be his only attempt at a vampire role, and that’s probably for the best.

Chaney’s inadequacy as the title character dooms the film as a whole, but the plot revolving around Frank and Kay still offers some entertainment for the hardcore horror fan. Louise Allbritton has something of a Cat People look going on for Kay, and we know she’s a strange girl when we first see her trailing her Gothic dress into the swamp to visit her old gypsy adviser. Even before she becomes a vampire she looks like one, with her dark hair, gossamer gowns, and moonstruck air. Robert Paige has the role with the most meat on it as the increasingly unhinged Frank; he’s equal parts Renfield and Harker, especially when the undead Kay turns up in his jail cell after he has confessed to accidentally killing her. The doomed love story between Frank and Kay makes the end of the picture one of its strongest scenes, one in which Chaney’s ineffective vampire does not figure at all.