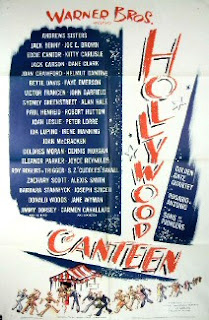 There really was a Hollywood Canteen during World War II; it was the brainchild of stars John Garfield and Bette Davis and the hottest spot in town for servicemen of all sorts throughout the war years. For the rest of their lives veterans would remember their evenings in that magical place, where the brightest stars of the big screen mingled with patriotic average Joes and danced the night away. The 1944 film, Hollywood Canteen, takes us back to that time with a fictionalized and patently romantic story that weaves together starry-eyed young love and musical numbers from Warner Brothers’ top acts. Unabashedly sentimental and perhaps a little too long, Hollywood Canteen is nonetheless a real treat for nostalgic viewers and fans of Warner’s vast sea of stars, and some of its musical numbers will absolutely knock your socks off if you enjoy the swinging sounds of the era.

Robert Hutton plays the film’s central character, Slim, a young Purple Heart recipient who is on leave for a few days before shipping back out to active duty. Along with his pal, Sergeant Nolan (Dane Clark), Slim makes his way to the Hollywood Canteen, where the biggest stars in Hollywood entertain and work the kitchen to support the war effort. Slim harbors a passion for leading lady Joan Leslie (Joan Leslie), and Nolan romances a junior hostess (Janis Paige), while various celebrities take a personal interest in Slim’s budding romance with his screen idol.

The story is really just a frame for the series of musical acts, but it’s sweet enough thanks to Hutton’s fresh-faced sincerity and Joan Leslie’s unfeigned loveliness. Hutton, more or less a newcomer to the screen in 1944, fits his character’s nickname perfectly with a lanky figure and “aw shucks” manner that recall a young Jimmy Stewart. Joan Leslie doesn’t have to work very hard at pretending to be herself, but her performance thoroughly justifies the crush nursed by Slim and plenty of real young servicemen. Her real-life sister, Betty Brodel, makes a brief appearance as herself, although, oddly enough, Joan’s parents are played by actors in uncredited roles, which mixes up real people and actors very confusingly when Joan brings Slim home to meet her family.

Warner pulls out all the stops in stacking the deck with terrific musical acts and star cameos, and these moments make the picture a delight for fans. The first half has the best numbers, with Roy Rogers and Trigger performing “Don’t Fence Me In,” the Golden Gate Quartet swinging it with “The General Jumped at Dawn,” and the Andrews Sisters singing an irresistibly funny version of “Corns for My Country.” The second half drags a bit with a series of instrumental numbers, especially since the clock is ticking for Slim and Joan’s inevitable parting, but the majority of the performances are winners, and the Joan McCracken dance production is particularly engaging and fun. Among the many stars making brief appearances look out for Bette Davis, John Garfield, Paul Henreid, Alan Hale, S.Z. Sakall, Joan Crawford, Barbara Stanwyck, Jack Carson, Jack Benny, and Ida Lupino. Peter Lorre and Sydney Greenstreet have an uproariously funny scene that capitalizes on their reputations as dangerous characters, and Joe E. Brown is delightful during his comedy bits and musical assistance during the “You Can Always Tell a Yank” number sung by Dennis Morgan.

Hollywood Canteen earned three Oscar nominations for music, original song, and sound. Delmer Daves, who wrote and directed the picture, is best remembered today for directing films like Dark Passage (1947), Broken Arrow (1950), and 3:10 to Yuma (1957). You can see more of both Robert Hutton and Dane Clark in the Daves picture, Destination Tokyo (1943). Find out why Joan Leslie inspired such devotion with High Sierra (1941), Sergeant York (1941), and Yankee Doodle Dandy (1942). For a New York version of the same set up, see Stage Door Canteen (1943).

Posted by Jennifer Garlen at 10:27 AM