Summer Under the Stars: Bette Davis in DANGEROUS (1935) 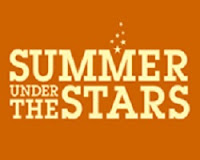 This post is part of the Summer Under the Stars blogathon hosted by Sittin' on a Backyard Fence and ScribeHard on Film. Visit their blogs for links to all of the Bette Davis posts in conjunction with TCM's day honoring the star on August 14, 2013.

Bette Davis won her first Best Actress Oscar for Dangerous (1935), a romantic melodrama directed by Alfred E. Green and costarring Franchot Tone. As the title suggests, Davis plays a female who proves fatal to the men who are drawn to her flame, but the story is melodrama than noir because Davis’ anti-heroine knows that she’s bad news and agonizes over what to do about it. With its top-notch Davis performance and excellent darker role for Franchot Tone, Dangerous is a must-see picture for the leading lady’s fans, even if it isn’t as well-known today as most of her other Oscar-nominated films. 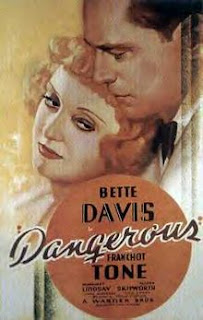 Davis plays alcoholic, has-been actress Joyce Heath, whose brilliant stage career collapsed when she became feared as a jinx on her plays. Her lovers have been unluckier still, as architect Don Bellows (Franchot Tone) discovers for himself when he takes Joyce in and promptly falls under her spell. Don breaks his engagement to socially prominent sweetheart Gail (Margaret Lindsay) and puts all of his money into financing a comeback for Joyce, but a terrible secret makes Joyce falter when Don presses her to marry him.

In Joyce Heath, Davis has an early version of the kind of character who would become her signature role, a wounded, emotional woman desperate for love and happiness but far too likely to lash out at those who only want to help her. Early on, Joyce has some of the low-rent, streetworn look of Mildred, the destructive character who had earned Davis her first Best Actress nomination in Of Human Bondage (1934). The drunk scenes are particularly reminiscent of the earlier role, but Joyce’s capacity for redemption prefigures great Davis characters like Julie Marsden in Jezebel (1938) and Fanny Skeffington in Mr. Skeffington (1944). Joyce is, like most of the really memorable Davis heroines, ready to go to extremes, especially in her willingness to take hints from Ethan Frome on how to solve romantic quandaries, but we sympathize with her because she is so unhappy and so ultimately determined to atone for her sins.

Davis has an adept costar in Franchot Tone as the latest lover to suffer for her bad luck. Tone played a lot of playboys and lovers in comedies during the 1930s, with memorable appearances in Bombshell (1933), Dancing Lady (1933), and The Girl from Missouri (1934), but here he gets to transform his happy golden boy into a miserable wreck. His cheerful face becomes gaunt and shadowy, his jaw hard, and his shoulders slumped as he gets deeper and deeper into a dangerous entanglement with Joyce, which eats away at his soul and drives him from the arms of his faithful girl. To her credit, Joyce tries to send Don away multiple times, honestly telling him that she will only bring him heartbreak and ruin, even as she yearns for him herself. Margaret Lindsay makes a plucky good girl foil to Davis’ Joyce, and Alison Skipworth does well in the role of Don’s middle-aged housekeeper. The weak link in the dramatic chain is John Eldredge as Gordon; he has a critical role to play late in the film, and it comes off badly, though to say too much about it is to spoil the plot for first-time viewers.

Full reviews to other  Bette Davis films airing on August 14 can be found here: 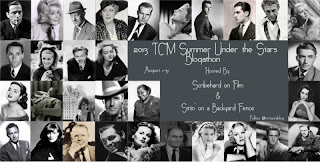 Posted by Jennifer Garlen at 9:44 PM