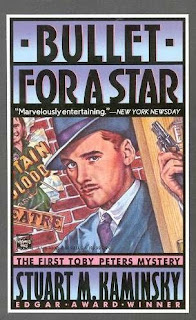 Having been seriously under the weather this week with wisdom tooth woes, I haven't been watching many movies, but I have been reading Stuart Kaminsky's Toby Peters mysteries. They're the perfect light reading for summer or sick days, especially for a classic movie fan.

If you aren't familiar with the series, here's an introduction. Toby Peters is a private detective in 1940s LA who specializes in tricky cases for Hollywood stars. While he doesn't claim to be the smartest guy in town, he is known for his ability to keep things under his hat, which makes him a perfect choice for publicity shy celebrities and their studio bosses. Toby has a thoroughly broken nose, a collection of unusual friends, and really rotten luck when it comes to being worked over by the bad guys. He gets occasional grief and assistance from his brother, Phil, a homicide cop, but usually he's trying to dodge the police because every corpse that turns up in his vicinity gets him picked up on suspicion of murder.

The first book, Bullet for a Star, features Errol Flynn, Peter Lorre, Edward G. Robinson, Humphrey Bogart, and a host of other stars. In other books, Toby takes cases for Bette Davis, Joan Crawford, Judy Garland, and even Salvador Dali and Eleanor Roosevelt. Kaminsky really did his homework in capturing the personalities of these famous characters, and film fans will especially enjoy the way he works references to classic movies into the plots and dialogue.

Kaminsky died in 2009, but he left behind more than 60 novels. You'll find a lot of the Toby Peters books on Kindle at Amazon, so check them out there, or look for them at your local library!
Posted by Jennifer Garlen at 1:40 PM