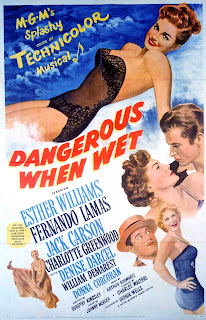 Musical comedies tend to be light, colorful affairs, the cinematic equivalent of cotton candy, and they have to be judged accordingly. If the picture is fun, sweet, and easy to watch, then it succeeds at its intended purpose, and Dangerous When Wet (1953) certainly fits the bill. Yes, Esther Williams is a bit of a gimmick star, a sort of aquatic Doris Day, but she has plenty of personality even when she isn’t in the water, and this particular Williams film gets a boost from a memorable supporting cast that includes Jack Carson, Fernando Lamas, William Demarest, Charlotte Greenwood, and Denise Darcel. With veteran musical director Charles Walters at the helm, Dangerous When Wet provides a fast-moving story, some unexpected twists, and a peppy energy that will keep the whole family entertained.

Williams plays Arkansas farm girl Katie Higgins, the oldest daughter in a family of fitness buffs. When tonic salesman Windy (Jack Carson) arrives in town, he convinces the Higgins clan to represent his product and enter a competition to swim the English Channel. Windy and the Higgins family travel to England and then France to prepare for the contest, but Katie becomes distracted from the race by a suave Frenchman (Fernando Lamas), while a sexy French swimmer (Denise Darcel) sets her swim cap at Windy.

In films with Doris Day and other leading ladies, Jack Carson often plays an unlikely love interest; sometimes he gets the girl and sometimes he doesn’t. Dangerous When Wet works hard to keep us in suspense about its various amours, with Windy clearly interested in Katie but then sideswiped by the more aggressive French characters. We can’t blame Windy for being attracted to Katie; her first scenes in the film amply display Williams’ robust physical charms. Fernando Lamas’ rival admirer initially comes off as something of a wolf, so we don’t know whether to root for Carson’s snake oil American or Lamas’ champagne seducer. Does Katie end up with the right guy? The movie makes us wait to find out, and I won’t spoil the ending by telling you here.

The supporting players are great fun. Crabby William Demarest and lanky Charlotte Greenwood make credible health nuts as the Higgins parents, and both are sublimely gifted physical comedians who are justly beloved by classic movie fans. Barbara Whiting provides most of the musical numbers as Katie’s younger sister, Suzie, although the family anthem is a ridiculously perky tune that gets repeated several times throughout the film. Denise Darcel puts her French accent to good use as Gigi, a rival swimmer who befriends Katie and pursues Windy with boundless joie de vivre. Stealing the picture from the human stars are cartoon icons Tom and Jerry, who appear in an underwater dream sequence with Esther Williams and an amorous octopus standing in for Fernando Lamas. Kids will enjoy the rest of the movie, but the animated sequence is a definitely a highlight that younger viewers are sure to love.

Dangerous When Wet might not be one of the greatest Hollywood musicals ever made, but it’s perfectly entertaining, and those interested in Esther Williams will find it a charming example of her signature style. For more of the swimming star, try Take Me Out to the Ballgame (1949), Neptune’s Daughter (1949), and Million Dollar Mermaid (1952). Look for Jack Carson playing similar roles opposite Doris Day in Romance on the High Seas (1948), My Dream is Yours (1949), and It’s a Great Feeling (1949). Fernando Lamas also stars in The Merry Widow (1952), Sangaree (1953), and The Lost World (1960); after three unsuccessful marriages, he married Esther Williams in real life in 1969 and remained with her until his death in 1982. Catch William Demarest playing more dads in The Miracle of Morgan’s Creek (1944) and Viva Las Vegas (1964), and see Charlotte Greenwood in Down Argentine Way (1940) and Oklahoma! (1955). Denise Darcel has memorable roles in Westward the Women (1951) and Vera Cruz (1954). For more from director Charles Walters, try Easter Parade (1948), Summer Stock (1950), and The Unsinkable Molly Brown (1964).

Dangerous When Wet is currently available for streaming on Warner Archive Instant.
Posted by Jennifer Garlen at 11:36 AM