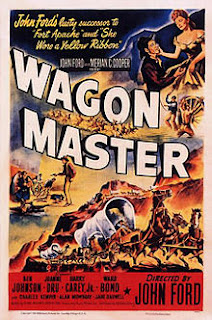 John Ford directed many more famous Westerns than Wagon Master (1950), but this modest oater about a Mormon wagon train reveals many of Ford’s signature touches and favorite players. It’s a dramatic tale that focuses on the interactions of several different kinds of frontier outsiders, including the Mormon settlers, their drifter guides, a small cadre of show people, and a dangerous gang of outlaws. Accompanied by the distinctive sounds of The Sons of the Pioneers, Wagon Master offers taut drama as well as the iconic scenery one expects from Ford’s films. Western fans will also appreciate the performances of genre stalwarts like Ben Johnson, Harry Carey, Jr., Ward Bond, Joanne Dru, Jane Darwell, and even a young James Arness.

Ben Johnson and Harry Carey, Jr. star as Travis and Sandy, a pair of wandering horse traders who take on a job as wagon masters for a group of Mormon settlers crossing a dangerous wilderness. The Mormons are led by Elder Wiggs (Ward Bond), who sees the young men’s presence as a gift from God, even if they cause some conflict within the religious group. The wagon train takes on a trio of stranded snake oil peddlars, including the attractive Denver (Joanne Dru), but they are then joined by a band of outlaws led by the injured Uncle Shiloh Clegg (Charles Kemper), who uses the settlers to hide from the law. Forbidding terrain and encounters with Native Americans add to the obstacles that the group must face on their long journey, but the Cleggs within their midst present the worst and most constant danger.

Wagon Master is not a flashy showpiece picture; it depends more on an ensemble cast of characters than a single, dominating personality. Each group, however, has its central figure: Ward Bond is gruff but good-natured as the Mormon Elder, Joanne Dru is saucy and charming as the worldly Denver, and Charles Kemper hides his menace beneath a folksy veneer as Uncle Shiloh. Ben Johnson’s Travis acts as the force that binds them, but the actor wisely plays the role with a frank, casual air that befits his cowboy persona. Harry Carey, Jr. makes an excellent partner to Johnson’s understated hero as a younger and more eager character who rapidly falls for one of the Mormon maidens. Jane Darwell, always an impressive presence, doesn’t have as much to do as one might hope, but James Arness gets a memorable opportunity to play the villain as one of the murderous Cleggs. Alan Mowbray has a small but noteworthy role as the medicine show leader, and Ruth Clifford is faded but kindly as his companion, Miss Fleuretty. These more colorful characters attract the viewer’s attention more than the mass of Mormons who make up most of the train, although Russell Simpson and Kathleen O’Malley get a few good scenes as Adam and his pretty daughter, Prudence.

Like Westward the Women (1951), this wagon train story doesn’t shy away from depicting the hazards of frontier settlement, and there are tense encounters with the natives as well as some dramatic moments of wagons in peril. The representation of the Mormon pioneers is unfailingly sympathetic, although polygamy is really only winked at when one settler’s wives look on dourly as he dances with a Navajo woman. Like the Quakers in other Westerns, the Mormons are shown as deeply religious people who oppose violence and immoral behavior but do not attempt to force others to live by their beliefs. We do see the settlers being run out of town early in the film, reminding us that they, like the rest of our characters, are treated as undesirables, but the Mormons are the opposite of the Cleggs in every way that matters.

With its unassuming hero and prominent musical accompaniment, Wagon Master has more in common with the popular “B” Westerns of its era than it does with Ford’s most lauded genre efforts, but it’s still an excellent picture. For contrast with the director’s other Westerns, see Stagecoach (1939), The Searchers (1956), and The Man Who Shot Liberty Valance (1962). Catch Ben Johnson in She Wore a Yellow Ribbon (1949), Shane (1953), and The Wild Bunch (1969). Harry Carey, Jr., whose father was also a veteran Western star, has good roles in 3 Godfathers (1948), The Searchers, and The Whales of August (1987). Ward Bond, Joanne Dru, and Jane Darwell all turn up in other Ford films, and Darwell even won an Oscar for Best Supporting Actress for her role in The Grapes of Wrath (1940).

Wagon Master is currently available for streaming on Warner Archive Instant. The film inspired the popular television series, Wagon Train, and you'll find several of the original movie's stars in various episodes.
Posted by Jennifer Garlen at 11:00 AM