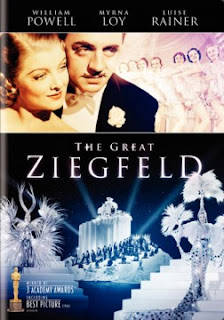 Directed by Robert Z. Leonard, The Great Ziegfeld (1936) is a lavish musical tribute to the legendary Broadway producer, with all the whistles, bells, and gorgeous girls that Ziegfeld himself could want, even if it does takes certain liberties with the facts of Ziegfeld’s life. Hollywood had an ongoing fascination with the Ziegfeld legacy, as films like Ziegfeld Girl (1941) and Ziegfeld Follies (1945) attest, so it’s no surprise that a biopic about the showman’s ups and downs would appeal, and, indeed, the film won three Oscars in 1937, including Best Picture. Today, Oscar fans trying to see every Best Picture winner are probably the most likely viewers of this stylish but overly long production, along with William Powell devotees and those with a nostalgic interest in Ziegfeld himself.

Powell stars as the ambitious Florenz Ziegfeld, Jr., who rises from promoting a sideshow strongman to producing some of the biggest shows ever seen on the Broadway stage. He constantly steals acts and borrows money from his friendly rival, Jack Billings (Frank Morgan), including the lovely singer, Anna Held (Luise Rainer), who becomes Ziegfeld’s first wife. His enthusiasm for his lady performers brings disaster to the marriage even as the shows themselves become hits, and Anna, heartbroken, divorces Ziegfeld and then loses him for good to second wife, Billie Burke (Myrna Loy). Billie stands by her husband through successes and failures, but the arrival of the Great Depression proves too much for the weary, aging producer.

Ziegfeld had been dead for only four years when the picture came out, but Billie Burke was still very much alive and interested in preserving a certain version of her late husband’s story. Ironically, the greater part of the romantic plot involves Anna and not Billie, although Anna had been dead since 1918. As with most classic Hollywood biopics, this one simplifies, elides, or simply lies about various aspects of the story, but the tragic cast of Anna’s relationship with Ziegfeld is one of the movie’s strongest points, thanks primarily to the Oscar-winning performance of Luise Rainer, who invests her character with great pathos and a birdlike fragility. Myrna Loy, who gets second billing as Billie, doesn’t actually show up until two hours in, leaving her with little time to develop her role beyond a montage of Ziegfeld family moments.

In addition to Powell, Loy, and Rainer, star watchers will find plenty of familiar faces in the movie’s large cast. Fanny Brice and Ray Bolger play themselves as members of the stage company, with Brice performing a portion of her famous “My Man” number and doing a bit of her signature comedy schtick. Frank Morgan enjoys quite a good role as Billings, and of course he’s a natural for the part of a bombastic showman, here warming up for his iconic turn as the title swindler in The Wizard of Oz (1939). Virginia Bruce has some memorable scenes as drunken starlet Audrey Dane, and Nat Pendleton is fun as the muscle-flexing Sandow. Sharp-eyed viewers will catch William Demarest, Dennis Morgan, and Reginald Owen making appearances, along with a bevy of beauties playing Ziegfeld girls (see if you can spot Lynn Bari and future First Lady Pat Nixon). Both Eddie Cantor and Will Rogers are impersonated by other actors; Rogers had died in 1935, but the real Cantor was still alive and well, and he even starred in Strike Me Pink the same year The Great Ziegfeld appeared.

Including its three wins, The Great Ziegfeld earned a total of seven Oscar nominations. Robert Z. Leonard went on to direct Pride and Prejudice (1940), Ziegfeld Girl (1941), and In the Good Old Summertime (1949). Powell and Loy have more memorable pairings in The Thin Man (1934) and its many sequels, as well as in Libeled Lady (1936). Luise Rainer won a second Best Actress Oscar the next year for The Good Earth (1937); as of August 2013 she is still living and at the age of 103 is truly an amazing example of graceful longevity. See Frank Morgan, Ray Bolger, and the real Billie Burke all together in The Wizard of Oz (1939), and catch more of the delightful Fanny Brice in Be Yourself! (1930).
Posted by Jennifer Garlen at 8:41 PM