TCM Summer Under the Stars: Doris Day in LOVE ME OR LEAVE ME (1955) 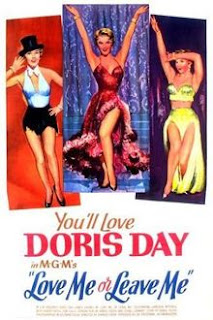 This post is part of the 2013 TCM Summer Under the Stars Blogathon hosted by Sittin' on a Backyard Fence and ScribeHard on Film. Visit their sites for all of the blogathon posts for each day in August!

I normally turn to Doris Day when I'm feeling down and need the cinematic equivalent of a cupcake - something light, sweet, and fun to chase the blues away. Musicals like Romance on the High Seas (1948), It's a Great Feeling (1949), and Calamity Jane (1953) - all airing on Turner Classic Movies during the Doris Day Summer Under the Stars marathon - certainly fit that bill, and they're the kind of picture Day is best known for today, along with her romantic comedies costarring Rock Hudson. Still, Doris Day could turn on the dramatic power when the role called for it, and Love Me or Leave Me (1955) is a great example of the darker side of Day.

Our leading lady stars as real life jazz singer Ruth Etting, who makes her way from 10 cents a dance girl to Hollywood star thanks to her own talent and the relentless efforts of her Chicago gangster promoter, Martin Snyder, played in the film by the terrific James Cagney. Ruth eventually marries Martin out of a sense of obligation to him (and perhaps fear of his jealous temper), but her heart really belongs to Johnny (Cameron Mitchell), a handsome pianist who finds his own route to Hollywood success. When Ruth and Johnny meet again in Hollywood after several years apart, Ruth's marriage to Martin reaches a violent climax.

Of course Day is an obvious choice to play a great singer, but she also does an excellent job depicting the unhappiness and bitter resignation that Ruth endures during her marriage to Martin. During the second half of the film, she manages to show the miles traveled through Ruth's expressions and body language without actually being one bit less attractive, and she really holds her own in the tense scenes with Cagney's powder keg Martin. The movie also shows off Day's more usual charms with a series of memorable song numbers and some gorgeous costumes, but the dramatic story is the heart of Love Me or Leave Me, and that's where Day really comes through. 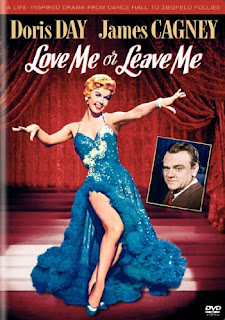 Cagney gives his costar plenty to work with as the volatile Martin; he manages to convince the audience that his character really does love Ruth but has no idea how to show it without being a domineering brute, and that delicate balance helps to justify the way the story ends. It's ironic to see Cagney, himself such an accomplished hoofer, limping around as a man often known as "The Gimp," but the role does recall his gangster characters from the 1930s; he was 56 when this film was released, but he still has the powerful presence of a much younger man. Cagney earned an Oscar nomination for Best Actor for his performance in this film; it was his third and final nomination for the award, with his only win for Yankee Doodle Dandy (1942) more than a decade earlier.

Love Me or Leave Me garnered a total of six Oscar nominations, but it won only for Best Story. You'll have to be a real night owl or a DVR user to catch Love Me or Leave Me during the TCM event, since it airs at 3:45 AM Eastern time, but it's well worth the effort. Catch some of the lighter Day films for the sake of contrast earlier in the lineup, especially the popular favorite, Calamity Jane (1953), which airs in the prime time spot at 8 PM on Friday, August 2. Check out the TCM website for a full schedule of films that will air during the Summer Under the Stars event.
Posted by Jennifer Garlen at 4:38 PM