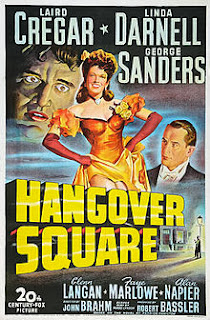 Laird Cregar’s final film is the only one in which he received top billing, but Hangover Square (1945) shows just how much talent was lost with the star’s premature death in 1944, two months before the picture was released. Like the earlier Fox horror thriller, The Lodger (1944), Hangover Square features direction by John Brahm and a memorable supporting performance from George Sanders, but Cregar rules the screen as a mentally unstable protagonist who is both the monster and the ultimate victim of his own uncontrollable evil.

Cregar plays George Harvey Bone, a talented composer whose mild manner gives way to murderous psychosis whenever he hears discordant sounds. Despite the devoted concern of his girlfriend, Barbara (Faye Marlowe), and the support of his mentor, Sir Henry (Alan Napier), George falls under the seductive spell of singer Netta Longdon (Linda Darnell), who uses George to compose songs for her rising career. Netta thinks that George is merely a convenient sap, but her treachery provokes another of George’s deadly rampages. Meanwhile, Scotland Yard expert Dr. Middleton (George Sanders) struggles to uncover the truth about George’s disturbing blackouts.

The movie opens with a dramatic sequence in which we see George commit his first murder, so there is never any doubt that he becomes a killer during his mental lapses. Our knowledge of his hidden nature creates ongoing dramatic irony as we wait for George and the people around him to figure out what we already know, and the tension mounts because we realize that George will kill again whenever his mind is jarred by the right kind of sound. Cregar’s genius in the role lies in his ability to play normal George as a sweet, sensitive artist and then invest monstrous George with glassy-eyed, animal violence. Like Larry Talbot or Dr. Jekyll, George Harvey Bone is an unwilling and even unconscious killer; he remains sympathetic throughout the picture because he really can’t stop himself or control what his darker side does. Unlike most of the actors who play these other monsters, however, Laird Cregar performs both versions of his character without any special makeup or transformation, and he does a magnificent job, especially in the climactic sequence where he finally recognizes his own monstrosity while playing his deliriously Gothic concerto.

Although Cregar is clearly the star of the show, Linda Darnell stands out as the scheming, selfish Netta, who plays with fire so contemptuously that we yearn to see her burned. Our wish is granted in a very literal sense, for fire is another motif that recurs throughout the picture. The use of fire as a component in a gentle artist’s transformation into evil also figures in the later Vincent Price picture, House of Wax (1953), but Hangover Square offers parallels to many classic horror stories, including The Phantom of the Opera, The Wolf Man, and the many adaptations of Dr. Jekyll and Mr. Hyde. Like the 1931 and 1941 versions of the Hyde story, Hangover Square provides George with love interests who reflect his light and dark aspects, although Faye Marlowe’s angelic Barbara is far less interesting than Darnell’s naughty Netta. George Sanders, however, has a very good role as the cool, clinical doctor who acts as a foil to the nervously unhinged George.

Laird Cregar dropped a hundred pounds by crash dieting to remake himself as a traditional leading man for this role; the drastic weight loss and a subsequent gastric bypass surgery proved too much for his body and caused a fatal heart attack shortly after Hangover Square was completed. Be sure to pay attention to his very different appearance in his earlier films, including Blood and Sand (1941), This Gun for Hire (1942), and The Lodger (1944). John Brahm also directed The Undying Monster (1942), Hot Rods to Hell (1967), and many episodes of thriller and horror television series. See more of Linda Darnell in The Mark of Zorro (1940), My Darling Clementine (1946), and A Letter to Three Wives (1949). Don’t miss George Sanders in Rebecca (1940), The Picture of Dorian Gray (1945), and All About Eve (1950), although his own most memorable villain might be the tiger Shere Khan in Disney’s The Jungle Book (1967).
Posted by Jennifer Garlen at 9:24 AM