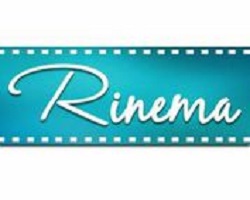 If you're already a user of Letterboxd and iCheckMovies, you'll want to check out the newest social media site for film fans, Rinema, which just launched earlier this week. I have been playing with it since it went live on Thursday, and so far I really like it. I also think it has some features that help it stand out from its competitors.

You can rate movies you have seen on Rinema, of course, but you can also do a lot more. The Pinterest inspired set up allows you to comment on movies rated or commented on by other users, and the visual design of the site is one of its most welcoming features. Lists are very easy to make and include the same strong visual component, although right now there are a few little kinks to work out (a "Feedback" button right on the page makes it easy to report any problems, however, should you have them).

I hope to add more "Taste Buddies" as the site acquires users. Rinema uses an OkCupid style of matching to compare users' ratings and suggest friends. Right now the pool is fairly small, but it should grow over time. The more movies you rate, of course, the more information the site has to work with.

Classic movie fans might have shared my frustration with iCheckMovies, which only rewards users for watching movies that are actually on its official lists, but Rinema is more egalitarian. It doesn't have any awards to work toward, but it does count every movie you rate. Rating movies is made even easier because Rinema lets you search movies by actor, director, or genre key word as well as title. That makes it really simple for classic film fans to go through and rate all of those Fred Astaire musicals, Preston Sturges comedies, and Joan Crawford dramas without having to type in every title. So far I have rated 1055 films since Thursday, but I have a lot left to do before I catch up with my actual tally!

If you do decide to give Rinema a try (it's free, so why not?), look me up. Here's my profile: http://www.rinema.com/users/garlengirl I'm working on lists for BEYOND CASABLANCA readers, and once the new book comes out I'll add a list for that one, too.

Finally, I have to mention that I have had several email conversations with Rinema creator Grishma Udani (based out of India), and she is super nice and very enthusiastic about communicating with movie lovers and making the site work well. Be sure to "friend" her if you sign up as a user (she's easy to find on the Leaderboard). She is eager to get feedback from users, so let Rinema know what you do and don't like when you start rating films.
Posted by Jennifer Garlen at 11:10 AM