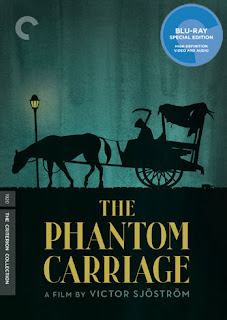 Its title might suggest a horror story, but The Phantom Carriage (1921) really offers a supernatural morality tale in the same spirit as Dickens’ A Christmas Carol, including the idea of the year’s end as an opportunity to confront one’s own shortcomings and sins. This silent Swedish film, important for its influence on Ingmar Bergman as well as its own merits, features a compelling if melodramatic story rendered hauntingly sublime thanks to its eerie special effects, in which dead men’s souls rise from their bodies and Death’s carriage collects its passengers on both land and sea. Directed by Victor Sjöström and adapted from the novel by Selma Lagerlöf, The Phantom Carriage is certain to thrill Bergman devotees but should also appeal to those generally interested in silent film or even the timeless theme of a lost soul’s quest for redemption.

Sjöström himself plays deeply flawed protagonist David Holm, a drunkard who repeats a New Year’s Eve story of the phantom carriage to his equally inebriated friends. The legend says that the last soul to perish as the old year ends must drive Death’s carriage for the coming year, and David inevitably finds himself in just such a position. In his ghostly form, David is forced to relive his darkest moments and witness the suffering his sins have caused, but his chance for reclamation might not be as lost as it seems.

The performances drive home the story’s moral purpose, even as they reveal the natural actions of the varied characters. Sjöström in particular gives a terrific and moving performance; the scene in which he breaks down a door with an axe resonates with emotional power, but he can also be pathetically funny, as he is when David rejects the idea of being dead and tries to crawl back into his lifeless body. As Georges, Death’s representative and current coachman, Tore Svennberg is somber but sympathetic, a Marley for David’s reluctant Scrooge. The rest of the important characters are women whose lives have been ruined by David’s thoughtless cruelty. Hilda Borgström suffers to the point of despair as David’s unhappy wife, while Astrid Holm plays Sister Edit, the virgin martyr doomed by David’s disease-ridden presence but determined to pray for his salvation with her last dying breath.

Although the story alone is enough to make The Phantom Carriage worth watching, the otherworldly effects really grab the viewer’s attention, especially in a film this early. Sjöström superimposes images to give the carriage and the souls of the dead their ghostly appearance of being part of and yet separated from the living world. We see spirits lifted from their corpses and thrown unceremoniously into the back of Death’s carriage, a sobering vision of the moment of death. No far-flung region is too remote; Death comes to the suicide sitting at home and to the mariner drowning at sea. The carriage itself, drawn by a ragged nag, is homely and unadorned, but it seems to glow with an unearthly light, and the horse’s bones almost show through its starved, transparent sides. It might not be a horror story, but there is something ineffably terrible about that spectral carriage and its occupants, something that might well haunt the viewer after the final scene has closed.

Pair The Phantom Carriage with The Seventh Seal (1957), It's a Wonderful Life (1946), or your favorite film adaptation of A Christmas Carol to continue the supernatural mood. Victor Sjöström also directed memorable Hollywood silents, including He Who Gets Slapped (1924), The Scarlet Letter (1926), and The Wind (1928). Sometimes billed in the United States as Victor Seastrom, he directed his final film, Under the Red Robe, in 1937, but continued to appear as an actor in Swedish movies like Bergman’s To Joy (1950) and Wild Strawberries (1957). For a completely different cinematic encounter with Death, try Death Takes a Holiday (1934).

The Criterion Collection edition of The Phantom Carriage is currently available for streaming on Hulu Plus.
Posted by Jennifer Garlen at 5:45 PM