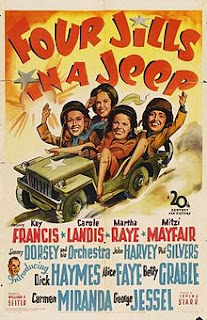 Directed by William A. Seiter, Four Jills in a Jeep (1943) is a fictionalized account of the real USO adventures of four Hollywood stars - Kay Francis, Carole Landis, Martha Raye, and Mitzi Mayfair - who travel to various parts of the globe to entertain the troops during World War II. Although it lacks the sheer entertainment value of other wartime revues like Hollywood Canteen (1944), Four Jills in a Jeep offers a uniquely realistic account of the ways in which stars helped the war effort by using their fame and talents to boost morale. Classic film fans can also enjoy musical performances from top Fox stars like Alice Faye and Carmen Miranda, although the four patriotic ladies who really undertook this trip together provide the picture’s greatest appeal.

Each of the four stars plays herself, with Kay Francis taking the lead as the group’s mother figure and Martha Raye providing the comic relief. Carole Landis is the singer of the bunch, and Mitzi Mayfair is the energetic dancer. Together, the women embark on an overseas tour that includes London and North Africa, and along the way they encounter bad weather, bombing, blackouts, and even romance.

While many of the wartime morale pictures are revues with narrative bits thrown in, Four Jills in a Jeep is more a story with musical segments scattered throughout. Jimmy Dorsey and his orchestra provide the accompaniment for most of the performances, and each of the four stars gets her opportunity to shine, but the women’s experiences prove more interesting than the songs and dances. It’s clear early on that the trip is a lot more challenging than they expected, but they gamely persevere, and their patriotism is genuine and affecting. Much of the romance is manufactured for the picture, but Carole Landis really did meet and marry a soldier during the tour. Sadly, by 1945 the two would divorce, and in 1948 the 29 year old actress ended her own life with a drug overdose. Her tragic story makes Landis the most moving presence in this film, since we see her recapturing moments of great happiness and demonstrating the real talent that would be lost with her premature death. Landis, by the way, also wrote the book version of Four Jills in a Jeep, although she had some help from a ghostwriter.

Several male costars support our leading ladies by taking the roles of soldiers, including Phil Silvers as Eddie, who functions as the group’s guide and assistant. Eddie also provides some additional comic relief, especially in his attempts to court Martha Raye, who rebuffs him every time. Singer Dick Haymes has better luck as Dick Ryan, an old flame of Mitzi’s who rekindles their romance and ultimately makes very good use of an otherwise harrowing moment in a North African trench. John Harvey, meanwhile, stands in for Carole Landis’ real life beau, Captain Thomas C. Wallace, as the handsome Ted Warren. Kay Francis enjoys a more muted romance with an English Army doctor, but most of the picture’s narrative attention focuses on the love lives of Landis and Mayfair. Haymes, with an excellent voice, gets the lion’s share of the screen time devoted to the men since he actually sings more songs than any other performer in the film.

In addition to brief appearances by Alice Faye and Carmen Miranda, you’ll also find Betty Grable and George Jessel. William A. Seiter also directed Stowaway (1936), You Were Never Lovelier (1942), and One Touch of Venus (1948). Kay Francis, a major leading lady of the Pre-Code era, stars in Man Wanted (1932), Jewel Robbery (1932), and Trouble in Paradise (1932). See more of Carole Landis in I Wake Up Screaming (1941) and Topper Returns (1941). The preternaturally flexible Mitzi Mayfair never made another feature film, but Martha Raye can also be found in Hellzapoppin’ (1941), Pin Up Girl (1944), and Monsieur Verdoux (1947). For a much more recent story of women’s experiences entertaining wartime troops, try The Sapphires (2012).
Posted by Jennifer Garlen at 11:18 AM