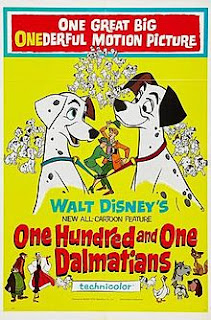 Walt Disney adapted 101 Dalmatians (1961) from the popular novel by English writer Dodie Smith, and by all accounts Smith was much happier with the experience than Mary Poppins author P.L. Travers. Smith might have been pleased because 101 Dalmatians is, in fact, a fairly faithful adaptation of the original story, with some key alterations, of course, but with most of its best material firmly intact. For dog lovers, 101 Dalmatians ranks right up there with Lady and the Tramp (1955) as one of Disney’s best canine tales, while classic movie fans will appreciate the vocal performance of leading man Rod Taylor as the heroic Pongo as well as the sly send-up of Tallulah Bankhead embodied in the fantastically campy Cruella De Vil.

The story follows handsome Dalmatian Pongo (Rod Taylor) and his human pet, Roger (Ben Wright), as they meet and set up housekeeping in London with their mates, Perdita (Cate Bauer) and Anita (Lisa Davis). Soon the canine couple welcome a litter of puppies, but their happiness is spoiled by the intrusion of Cruella De Vil (Betty Lou Gerson), who tries to buy the puppies as soon as they are born. Roger rejects Cruella’s money, but the puppies are later stolen by Horace and Jasper Baddun (J. Pat O’Malley and Frederick Worlock), working on Cruella’s orders. Determined to rescue their children, Pongo and Perdita set off on a dangerous journey through the snowy English countryside to find the puppies and bring them home.

One of the nicest parts of this story is its emphasis on two parents working together to save their family. Both Pongo and Perdita are active, brave, and capable; Disney movies often come up short in the maternal department, so Perdita’s role is especially refreshing, even if Pongo tends to take the lead. With the focus on perilous adventure, this is actually one of Disney’s least musical classics, but the naughty appeal of “Cruella De Vil” makes up in quality what the movie lacks in quantity of songs. Cruella herself would be absolutely terrifying if she weren’t so ridiculous, especially since her dream is to make dog skin coats out of the plethora of Dalmatian puppies she has stashed away at her crumbling country manor. She’s at her scariest when she gets behind the wheel of her car and tries to chase the dogs down after their escape, although the inevitable joke about women drivers sounds pretty lame to twenty-first century ears.

Unlike some other Disney pictures, 101 Dalmatians mostly relies on voice actors who aren’t particularly well known today, with Rod Taylor the obvious exception. Still, the movie offers a few tidbits for classic movie fans, particularly in Betty Lou Gerson’s outrageous parody of fellow Southerner Tallulah Bankhead in the voice of Cruella. Gerson really captures the notorious star’s manner of speaking, while the animation emphasizes the campier aspects of Bankhead’s persona in Cruella’s appearance and behavior. The Disney Cruella is still tamer than Smith’s original, who appears to be much more literally what her name implies, although some well-bred Alabama ladies might have said the same about Huntsville’s most infamous daughter. Interestingly enough, prolific character actress Mary Wickes provided the live-action reference performance for Cruella, which gives the character another layer of classic Hollywood significance. Wickes is also credited as providing an unspecified voice for the picture, and she’s joined in the large background cast by Thurl Ravenscroft, Barbara Luddy, and Dal McKennon. Sharp ears might also pick out The Falcon star Tom Conway as the voice of the Quizmaster and the helpful collie. If you think that collie sounds like a much more familiar classic actor, it’s because Tom Conway was really Tom Sanders, the brother of Oscar-winning star George Sanders.

Be sure to watch for quick cameo appearances by several of the canine characters from the earlier Lady and the Tramp. With its action leading up to a Christmas climax, 101 Dalmatians makes for good holiday family viewing. Disney has since made a live action version of the story and some sequels, but the original movie is still the best of the lot. For Rod Taylor’s most memorable roles, see The Time Machine (1960) and Alfred Hitchcock’s iconic thriller, The Birds (1963). Betty Lou Gerson also provides the voice of the narrator in Cinderella (1950), but you can catch her in live action in The Fly (1958). Check out Tom Conway in The Falcon films of the 1940s and in Val Lewton horrors like Cat People (1942) and I Walked with a Zombie (1943). Finally, be sure to read Dodie Smith’s wonderful novel; it offers even more characters and scenes than the movie has room to include.
Posted by Jennifer Garlen at 9:22 AM