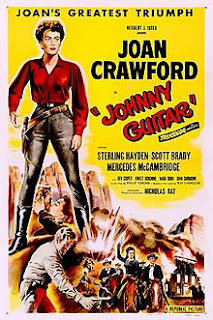 Director Nicholas Ray’s Johnny Guitar (1954) has the trappings of a conventional Western, with its cowboy hats, lynch mobs, and hold ups, but the heart of the movie beats to the rhythms of melodrama and noir, and this triple blend makes the film quite a chimera. Taking the vicious rivalry of two women as its major theme, Johnny Guitar revels in a perverse reversal of the usual character tropes of the Western, even as it also explores the dangers of mob mentality seen in more traditional Westerns like The Ox-Bow Incident (1943). Joan Crawford stars with a cast that includes many Western regulars, including Ward Bond, Ernest Borgnine, John Carradine, and Royal Dano, but the fireworks between Crawford and rival actress Mercedes McCambridge will keep viewers glued to the screen.

Sterling Hayden plays the title character, a former gunslinger turned guitar player, but the real protagonist is Joan Crawford’s Vienna, who calls Johnny in as protection against the ranchers who want to close down her bar. Johnny and Vienna have history together, but Vienna has also attracted the admiration of the handsome Dancin’ Kid (Scott Brady). When the Kid and his gang hold up the bank, Vienna’s bitter rival, Emma Small (Mercedes McCambridge), hopes to implicate Vienna in the crime and induce the local posse to lynch her. The Kid, meanwhile, encounters problems of his own as his gang falls apart in the aftermath of the robbery.

Vienna is a perfect character for this incarnation of Joan Crawford, with her wide, red mouth and hard eyes full of anger. She is a fury in men’s clothes, all sharp edges only rarely relieved by any hint of softness. Equally intimidating is her antagonist, Emma, who straps on a gun belt over her mourning dress to lead the posse on its bloodthirsty quest. Neither woman is represented as beautiful or vulnerable, and neither symbolizes civilization in the way the Western’s women normally do. These women hate each other so passionately that they make the men around them nervous; even Emma’s ally, McIvers (Ward Bond), flinches at Emma’s relentless wrath. The lynching attempt serves as a climactic moment, when the men, unwilling to hang a woman, tell Emma that she’ll have to kill Vienna herself.

As Johnny, Sterling Hayden plays it low key in contrast to the pitched emotions of the two women, but his presence helps to enhance the noir atmosphere. The rest of the supporting cast includes actors who are perfectly at home in a Western, particularly Ward Bond, although his part in leading the mob pales against the irresistible force of Mercedes McCambridge’s Emma. John Carradine, lurking around the edges of the picture through much of the action, makes the most of his one big scene, and Ernest Borgnine is up to no good from the first time we see him, the only really bad guy in the Dancin’ Kid’s not so bad band. Young Ben Cooper gives the gang pathos as boyish Turkey, while Royal Dano nurses a consumptive cough as Corey. The Kid's humane treatment of both, and his loyalty to them, contrasts with Borgnine's selfish Bart and the murderously self-righteous townspeople, who have the gall to accuse the Kid and his gang of being the undesirables in the area.

Take time to appreciate the film’s pointed use of symbolism, from Vienna’s carefully chosen white dress to the chandelier that features in several key scenes. The bar itself is one of the most important symbols; Vienna makes it clear that every beam and nail in the place represents some piece of herself prostituted to a parade of lusting men, much to Johnny’s distress. Given that history, the bar’s fate is not only inevitable but necessary if Johnny and Vienna are to have any hope of rebuilding their relationship, assuming they survive the deadly plans of the lynch mob and the treachery brewing in the Kid’s band of thieves.