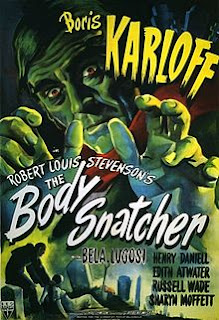 Adapted from a short story by Robert Louis Stevenson, The Body Snatcher (1945) is yet another example of producer Val Lewton’s genius for turning out elegant, literate horrors on a shoestring budget. This period tale of grave robbers in 19th-century Scotland benefits from the direction of Lewton protegee Robert Wise and the presence of genre icons Boris Karloff and Bela Lugosi, but the psychological effect of The Body Snatcher also hinges on a particularly memorable performance from Henry Daniell as a physician whose Faustian bargain with the resurrection man brings about his own undoing. Like most of the Lewton films for the RKO horror unit, The Body Snatcher eschews gore to revel in suggestion, but there is no shortage of unseen awfulness to stir the dark corners of the viewer’s imagination.

Karloff plays the title character, Cabman Gray, who drives a carriage for hire when he isn’t digging up corpses. Gray’s chief client is Dr. McFarlane (Henry Daniell), who loathes Gray but has too much history with him to escape the body snatcher’s power. When McFarlane takes on medical student Fettes (Russell Wade) as his assistant, he draws the young man into the dark side of Victorian medicine and exposes him to Gray’s machinations. Soon Gray begins providing corpses for McFarlane without waiting for them to die of natural causes, and McFarlane realizes that only one course of action will ever release him from Gray’s relentless grip.

Karloff and Daniell dominate the screen as two men who both hate and need one another, tied together by a past that evokes the lurid history of the notorious real life Edinburgh murderers Burke and Hare. Karloff plays Gray as a smiling villain who uses his friendly, obsequious manner to pacify his victims and disarm his enemies, which makes his outbursts of violence all the more shocking. Early in the film, he brutally kills a faithful little dog guarding its young master’s grave, so we understand the sort of outrageous cruelty of which he is capable. His opposite is Daniell’s McFarlane, mockingly called “Toddy” by Gray, who cannot smile even at those he really cares about, including his housekeeper, Meg (Edith Atwater), who is also secretly his wife. Gray is utterly, even gleefully, evil, while McFarlane is a man whose better nature has been corrupted by his involvement with the body snatcher’s trade.

The rest of the characters serve to react to the two protagonists and their ongoing conflict. Russell Wade, handsome but rather bland as Donald Fettes, must avoid repeating his teacher’s fate, and he also provides a muted romantic subplot with an attractive widow (Rita Corday) who has brought her crippled daughter (Sharyn Moffett) for treatment by Dr. McFarlane. The little girl, Georgina, adds some sentiment to the story with her plight, but she also brings irony in her childish obsession with Gray’s white horse, which otherwise functions as a symbol of death. Edith Atwater plays Meg to great effect, investing her with tragic resignation to the fate of the man she loves. Lugosi, oddly enough, has only a few scenes as Joseph, McFarlane’s servant, but his presence pays off with an opportunity to see him and Karloff together in one memorable, violent meeting.

Be sure to appreciate the beautiful singing voice and chilling fate of Donna Lee as the blind street girl, whose encounter with Gray is a quintessential moment of Lewton horror. For another collaboration between Val Lewton and Robert Wise, see Curse of the Cat People (1944), or try The Haunting (1963) for Wise’s most famous work in the horror genre. Karloff and Lugosi can be found in many Universal horror films both separately and together; see both of them in The Black Cat (1934), The Invisible Ray (1936), and Son of Frankenstein (1939). Career villain Henry Daniell has more memorable roles in The Sea Hawk (1940), The Great Dictator (1940), and Jane Eyre (1943); although not primarily a horror actor, Daniell did return to the genre for several episodes of the Boris Karloff television series, Thriller. For different tales of the resurrection men and their ghastly work, you might try more recent pictures like I Sell the Dead (2008) and Burke and Hare (2010), but it's also a frequent theme in the series of Frankenstein films.
Posted by Jennifer Garlen at 7:48 PM