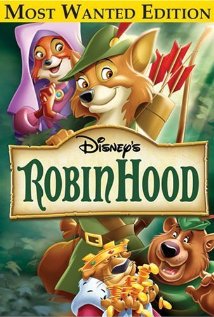 Robin Hood has appeared on film many times, with Errol Flynn providing the most iconic version of the Sherwood outlaw, and the 1973 Disney version clearly takes its cues from the earlier pictures. The twist in this animated rendition of the classic tale is that all of the characters are depicted as talking animals, with the crafty Robin appropriately assuming the form of a handsome fox. Disney’s Robin Hood also adopts a folksy attitude that might not be historically accurate but really works quite well with the story and justifies the voices of familiar actors like Phil Harris, George Lindsey, Andy Devine, Ken Curtis, and Pat Buttram. With its classic story, colorful characters, and memorable songs, Robin Hood delivers good-humored family fun and makes a perfect starting point for introducing very young viewers to Robin and his band of friends.

In this version, as always, Robin Hood (Brian Bedford) and his comrade Little John (Phil Harris) live in Sherwood Forest and rob the rich in order to help the poor. Their enemies include the scheming Sheriff of Nottingham (Pat Buttram) and the evil Prince John (Peter Ustinov), who are using the absence of King Richard to squeeze the realm for their own gain. While dodging the Sheriff and doling out coins to the oppressed, Robin also finds time to rekindle an old romance with lovely lady fox, Maid Marian (Monica Evans), but a plot to execute Friar Tuck (Andy Devine) forces a climactic confrontation between our heroes and the Prince’s lackeys.

The movie juxtaposes its vision of "Merrie Olde England" with a distinctly American rural character, although a few key figures, including Robin and Prince John, retain their English accents and manners. We’re introduced to the film’s unique merger of English village and American country by the appearance of our narrator, Allan-a-Dale, a rooster voiced by the drawling popular singer Roger Miller. Kids today might have no idea who Miller is, but audiences in 1973 would have recognized the Grammy Award winning singer’s voice from his hit songs, including “King of the Road” and “England Swings.” The folksy ambience is enhanced by Western character actors Andy Devine as Friar Tuck, Pat Buttram as the Sheriff, and Ken Curtis as the vulture guard Nutsy. Southerner George Lindsey, best known as Goober on The Andy Griffith Show, provides the voice for Trigger, while bandleader and radio comedian Phil Harris, who grew up in Nashville, lends his lazy, subtle drawl to Little John.

The swashbuckling action is mostly light-hearted, with the archery contest fight a particular highlight, although Robin does face some more serious peril in the climactic finale. The outlaws are especially funny in an early caper conducted in drag as gypsy fortune tellers, and Phil Harris gets off some great lines in Little John’s scenes with Prince John at the contest. Terry-Thomas works the fork-tongued speech of Sir Hiss to wonderful effect, while Peter Ustinov perfectly conveys the effete villainy of Prince John, and together these two make their rotten characters more hilarious than threatening, especially when they find themselves outwitted by Robin yet again. Prince John, a lion without a mane, has a particularly hilarious habit of sucking his thumb and calling for his mother in times of distress; the psychosexual subtext of the character is undoubtedly lost on kids, but they'll still laugh heartily at the prince's childish tantrums.

Robin Hood earned an Oscar nomination for the song, “Love,” but you’ll probably find the songs performed by Roger Miller more memorable, and “Whistle Stop” has achieved a whole new level of popularity thanks to the “Hampster Dance” internet meme. Several of the voice artists appear in other Disney films: listen to Phil Harris in The Jungle Book (1967) and The Aristocats (1970), and catch Pat Buttram and George Lindsey as the troublesome hounds in The Aristocats. Adults will appreciate Peter Ustinov’s Oscar-winning performances Spartacus (1960) and Topkapi (1964). If the Disney version of the story is a hit with younger viewers, follow up with the 1938 Errol Flynn film.
Posted by Jennifer Garlen at 11:25 AM