Putting on a Show: Mickey Rooney and Judy Garland 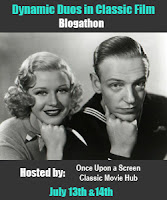 Note: This post is part of the Dynamic Duos Blogathon hosted by Once Upon a Screen and Classic Movie Hub. Visit the host sites for complete lists of all of the great blogs participating in this event!


Looking back, they seem like such different Hollywood creatures: Mickey Rooney, so resilient and tough that in 2013 he’s still with us after more than 300 film and television appearances, and Judy Garland, a bright but fragile star who blazed through fewer than 40 roles before her tragically premature death in 1969. Together, though, they made nine films and ruled the screen as one of the most popular Hollywood duos of the classic era, beginning with Thoroughbreds Don’t Cry in 1937 and ending in 1948 with Words and Music. 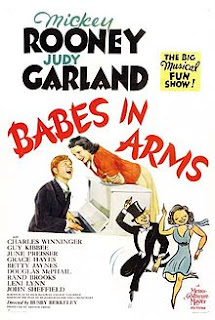 What made Rooney and Garland such a hit with audiences? It had - and still has - a lot to do with their youth and the fresh-faced, innocent quality of their onscreen chemistry. At their best, in films like Babes in Arms (1939) and Strike Up the Band (1940), their romantic attraction has a sweetness wholly unassociated with sex. Theirs is a puppy love, eager, sentimental, and simply told if they can just get themselves to grow up enough to say it. They are the boy and the girl next door, denizens of an unfallen age, where putting on a show can solve almost any problem life can dish out.

When they made their first film together in 1937, Garland was still a relative newcomer, but Rooney was already a big star, thanks to his breakthrough title role in the Mickey McGuire shorts and performances in feature films like A Midsummer Night’s Dream (1935), Little Lord Fauntleroy (1936), and Captains Courageous (1937). The lead in the first Andy Hardy film, A Family Affair (1937), helped to propel him to even greater fame, and from 1939 to 1941 the short, boyish star was the top box office actor in the country.

Judy’s own star was rising in those years, especially after the huge success of The Wizard of Oz in 1939. She had become part of the Andy Hardy cast with Love Finds Andy Hardy in 1938, and she went on to appear with Rooney in two more of the Hardy films: Andy Hardy Meets Debutante (1940) and Life Begins for Andy Hardy (1941). Andy Hardy, however, already had his primary love interest in Polly Benedict, played by Ann Rutherford, so Garland’s Betsy Booth generally pined in vain for Andy’s affection. 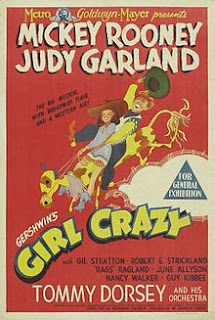 In the “show” pictures the pair really got to demonstrate their compatibility, dancing, singing, plotting, and laughing together as various characters who stage musical revues to save their families, themselves, or their schools. Mickey possesses an almost manic energy in these movies, with big gags, wild dance routines, and crazy costumes. Judy, wide-eyed and adorable, does not yet reveal the toll her fame would take, and her musical performances seem almost effortless.

Judy’s characters tend to be the sincerer and more sensible ones, while Mickey’s hot-blooded young fellows often need to be reminded of the core values of friendship, honesty, and integrity. When MGM varies that formula, as they do in Girl Crazy (1943), things can go a bit off the rails, but when they get it just right in the earlier films, like Strike Up the Band, they really show the two stars at their irresistible best.

If you want to see the Rooney and Garland films for yourself, Turner Classic Movies has a DVD collection of four of their collaborations: Babes in Arms, Strike Up the Band, Babes on Broadway, and Girl Crazy. It includes introductions from Mickey Rooney for each of the films, in which he talks about his memories of Judy Garland and their time together. Warner Archive has also just released a new volume of Andy Hardy films on DVD, which includes Love Finds Andy Hardy. The other Hardy films with Judy Garland are included on an earlier volume of the collection. Babes on Broadway is also currently available on Warner Archive Instant.
Posted by Jennifer Garlen at 10:09 PM