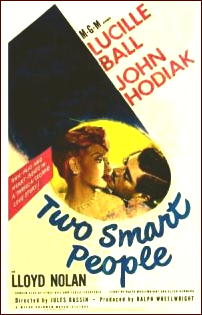 Before she was Ricky Ricardo’s wacky wife, Lucille Ball had a different career as an up-and-coming leading lady on the big screen. She never became as big a star there as she would on television, but Ball made several pictures that are still worth watching today, including the crime romance mash-up Two Smart People (1946). Directed by Jules Dassin, this minor classic offers an interesting mix of genres but is carried mostly by the performances of Ball and her toothy costar, John Hodiak. Fans of caper stories and con men will appreciate Two Smart People for its larcenous protagonists, while cinephiles will enjoy seeing Ball, Hodiak, and a supporting cast that includes Lloyd Nolan and Elisha Cook, Jr.

Ball plays attractive lady swindler Ricki Woodner, who gets involved with fellow con artist Ace Connors (Hodiak) at the behest of mutual acquaintance Fly Feletti (Elisha Cook, Jr.). Fly wants to get his hands on a stack of bonds stolen by Ace, but so does law man Bob Simms (Lloyd Nolan), who is taking Ace by train to New York and prison. Ricki tags along on the trip, which includes stopovers in Mexico and New Orleans, but her developing attraction to Ace complicates her efforts to make off with the bonds.

Despite her reputation as a comedienne, Lucille Ball could be as gorgeous and classy as any leading lady of her era, and she makes a good match for Hodiak and his carnivorous grin. Both actors know their way around the wised up attitudes of career criminals who are much better at lying than they are at telling the truth, even when falling in love. Their dishonest habits both bring them together and divide them, and much of the romance builds upon the problems of two untrustworthy people trying to come clean about themselves and their feelings for each other. The story underlines its themes of penitence and redemption by situating the last third of the action in New Orleans at Mardi Gras, where Ace describes his impending prison term as the Lent that follows a last wild night of self-indulgence.

The romance is further complicated by the presence of Bob as an unusual third wheel, given that Ace is technically under arrest the whole trip. Lloyd Nolan plays Bob as a perfectly straight arrow, which actually makes him subtly funny, and his mild demeanor keeps him likeable in spite of his kill-joy role as jailer. We like Ace because he’s more fun, but we never dislike Bob, partly because Ace clearly respects and likes his opponent, too. Bob’s opposite is Elisha Cook, Jr. as the devious, thoroughly nasty Fly, who threatens Ricki to keep her working for him and then resorts to more deadly efforts during the dramatic Mardi Gras climax. These two supporting characters represent the polar opposites of good and evil, law and chaos, with Ricki and Ace existing somewhere in between. The narrative’s insistence that the lovers pay for their past sins makes for something of a downer ending, but we’re meant to understand that they’ll come out on the other side worthy of having a new life together. The end result is basically a morality play, but there’s enough entertainment to make the dose palatable to most viewers.