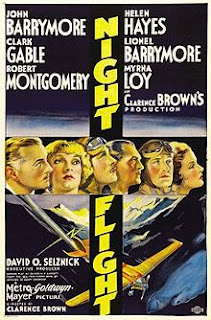 Directed by Clarence Brown, Night Flight (1933) offers another example of the large ensemble MGM drama epitomized by Grand Hotel (1932) and Dinner at Eight (1933), this time set against the first perilous attempts at nocturnal aviation across South America. The cast includes a full roster of top stars, including John and Lionel Barrymore, Helen Hayes, Clark Gable, and Myrna Loy, but the film ends up being less than the sum of its parts. While Night Flight is worth a look by serious fans of its stars, those expecting a production equal to the more famous ensemble pictures will be disappointed. It is, however, a provocative picture for those fascinated by flight, with thrilling aerial photography that is sure to give nightmares to nervous fliers.

John Barrymore stars as Riviere, the iron will behind a venture to deliver overnight mail across the deadly South American continent. With death-defying pilots played by Clark Gable, Robert Montgomery, and William Gargan, Riviere fights both the elements and his own board of directors to get the first batch of mail delivered on schedule. The women in the pilots’ lives question the value of their sacrifice, but the audience knows that the night’s mail includes desperately needed serum to treat an outbreak of polio in Rio de Janeiro.

Despite its stellar cast, Night Flight never gets off the ground as a character drama because most of its actors spend their screen time isolated from one another, unable to interact or do much more than look stricken or determined, depending on where they happen to be. Gable is particularly wasted as the pilot Jules Fabian, while Helen Hayes is left to over emote at his photograph as Fabian’s wife. Myrna Loy doesn’t even turn up until very late in the film, and she really only has one scene. Robert Montgomery comes off better as the lucky Pellerin, who lives through his white-knuckled flight to enjoy a few very good scenes on the ground, especially as he marvels at his own survival and his safe return to terra firma. The lion’s share of the screen time belongs to the Barrymore brothers, who do have some very dramatic moments together, although Lionel seems to be using an implacable itch to upstage John every chance he gets. Most of the actors, however, simply don’t get the chance to demonstrate the considerable talents that we know they possess.

Their isolation, troublesome as it is, is intentional, since the story focuses on the lonely lives of the pilots and the women who love them. The Barrymore characters are also profoundly lonely men, so much so that John’s Riviere envies Lionel’s Robineau for having a constant companion in his itch. The movie succeeds at depicting this loneliness most poetically and effectively with its aerial photography and scenes of communal life unfolding on the ground. The pilots, cut off from the people who watch them fly overhead, exist in a phantom zone of darkness, storms, and cloud-wrapped mountain peaks. Their women sit at home and wait, equally alone with their hopes and fears. All around them, humanity goes on, but each of our central characters lives a suspended life, imprisoned in cockpits, offices, and apartments as surely as if they were iron cells. As a philosophical exercise, the theme works very well, but it simply doesn’t make the best use of the cast on offer.

Antoine de Saint-Exupery, who wrote the original novel on which Night Flight is based, is best remembered today as the author The Little Prince. For more films from director Clarence Brown, try Wife vs. Secretary (1936), National Velvet (1944), and Angels in the Outfield (1951). Aviation movies were popular throughout the 1930s; see Hell’s Angels (1930), The Dawn Patrol (1938), and Only Angels Have Wings (1939) for more examples of the type. Clark Gable also stars as a pilot in Test Pilot (1938), with Myrna Loy and Lionel Barrymore as two of his costars. The Barrymore brothers only made one picture with sister Ethel, Rasputin and the Empress (1932); of the three, Lionel was by far the most prolific, with over 200 film credits to his name. He won a Best Actor Oscar for his performance in A Free Soul (1931), but he is best known today as mean Mr. Potter in the Christmas classic, It’s a Wonderful Life (1946). Be sure to see Grand Hotel (1932) and Dinner at Eight (1933) for more of the brothers’ collaborative work.

Night Flight is currently available for streaming on Warner Archive Instant, and a DVD version is also available on Amazon and from other retailers.
Posted by Jennifer Garlen at 9:57 PM