Why I Write About Classic Movies 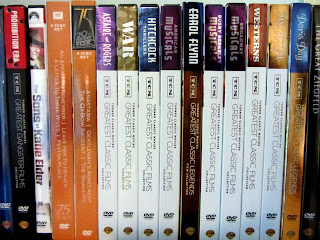 I spent the morning today talking to prospective students for my upcoming Spencer Tracy film series for LearningQUEST, a local lifetime learning program. I have been teaching these courses for several years now, and it's always great to have people return each term for another series and the chance to watch old movies together. Talking with new and returning course members reminded me why I love classic movies and write about them here on my blog.

I love them for themselves, of course. I'm a narrative scholar from way back, and a good story is the ultimate attraction for me. Classic movies tend to focus more on the story than our modern blockbusters, which mostly seem to be written by committees determined to sacrifice plot and character in favor of big special effects that will track well in the overseas box office. Give me a nuanced plot with smart dialogue and a loaded subtext any day; I'll always take Billy Wilder over Michael Bay, thanks very much.

I love them for their stars, too. "We had faces then," brags Norma Desmond in Sunset Boulevard (1950), and, boy, was she right. Classic movies have stars like very few that we see today; partly that's because of the studio system that created and maintained their public personae, but partly it's because the kinds of movies being made - smart, dialogue-driven productions that were character-oriented and intended for adults of both sexes - demanded a different caliber of star. Classic movies have Bette Davis, Ginger Rogers, Humphrey Bogart, Spencer Tracy, Katharine Hepburn, and Cary Grant, and they're just the tip of the iceberg. Even silent movie stars beat the pants off the green screen newcomers we have today. Watch Buster Keaton and Harold Lloyd, for example, and you'll never be impressed by modern CGI action movies again.

Talking with the LearningQUEST members about their favorite stars and movies also reminded me that I love these older films for the connection they create between generations. I have always spent a lot of time around people who were older than myself, and even now in my early 40s I am drawn to hang out with people in their 70s and 80s. (It was an extra pleasure to be referred to as a "pretty young girl" today by one of my regulars!) Often my students in these courses will tell me about the first time they saw a particular classic, or an encounter they had with a star, or their own memories of an event being portrayed in a film that we watch, and I really treasure those conversations. I also love to find young classic movie fans on Twitter and other social media; it gives me hope for the future to know that there are 17 year olds out there who are watching John Ford, Akira Kurosawa, Preston Sturges, and Chaplin. How heartening it would be to get those 17 year olds and 75 year olds in the same room and see them all laugh at Sullivan's Travels!

I write about classic movies here on Virtual Virago because they are important to me. In them I find narratives worth thinking about, stars worth watching, and stories worth sharing with others. They aren't "just movies." They are records of our history and culture, collaborative works of art, statements about the meaning and value of the human experience. I hope that other people appreciate what I write, but my chief goal is to draw attention to the films themselves, to help people appreciate them and find new films they might not have seen or even heard of before. That's probably why most other classic movie bloggers write, too. We do it for the love of cinema, for the sake of the films and what they mean to us. We do it because Spence and Kate, Bette and Errol, Fred and Ginger, and all those other lights that filled the Hollywood sky, have reached out to us from across time and space to offer something meaningful and precious that enriches our lives.

Who wouldn't want to write about an experience like that?
Posted by Jennifer Garlen at 8:34 PM