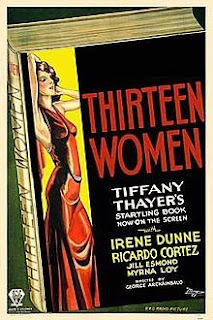 Directed by George Archainbaud, Thirteen Women (1932) is a Pre-Code thriller starring two great actresses of the 1930s, Irene Dunne and Myrna Loy. As its name implies, this film focuses on female characters for most of its action, which sets it apart from other murder mysteries, but it’s a mixed bag as a picture, with a particularly weak third act. Fans of Myrna Loy, however, will still want to see Thirteen Women for another of the star’s memorable performances as an exotic femme fatale, while those who enjoy classic Hollywood trivia will appreciate the film as the only screen appearance of the doomed Peg Entwistle, who famously committed suicide by throwing herself from the top of the Hollywood sign.

Loy plays the mesmerizing half-caste murderess, Ursula Georgi, who uses a swami (C. Henry Gordon) to exact revenge on a group of schoolmates who were unkind to her years ago. One by one the women succumb to Ursula’s baleful influence, and even the swami ends up dead. The survivors gather and hope to ward off their predicted fates, but their leader, Laura (Irene Dunne), must confront the enemy when Ursula targets her son, Bobby (Wally Albright), as the next victim. With the help of a handsome police sergeant (Ricardo Cortez), Laura strives to keep Ursula’s latest prediction from coming true.

We never actually see the whole group of thirteen women in the movie; apparently, some of them ended up on the cutting room floor, with the final version of the picture chopped down to a mere 59 minutes. Fortunately for Hollywood history, Peg Entwistle’s brief appearance stayed in the picture, giving us our only chance to see her onscreen. Like most of the other actresses, Entwistle gets a chance to crank up the sense of doom; ironically, her character, Hazel Cousins, does not commit suicide but instead goes mad and stabs her husband. Mary Duncan opens the series of tragedies with a very effective performance as June Raskob, the trapeze artist, and Kay Johnson has perhaps the most heart-wrenching fate as the grieving mother, Helen, who needs little encouragement from Ursula to kill herself after the recent death of her young child.

Myrna Loy’s performance as the villainous foreigner serves as the real attraction of the film. With her striking costumes and heavy eye makeup, Ursula symbolizes the seductive Eastern Other, striking out at white Western women after their thoughtless rejection of her. Loy got typecast in this kind of role early in her career, but she does it so well that it’s easy to see why. Her best scenes feature her seducing and manipulating the helpless swami and her accomplice, Burns (Edward Pawley), especially the moment that sees her willing the swami to death on the train platform. Men simply turn to putty in her hands, and her hypnotic stare rivals that of Bela Lugosi in Dracula (1931). She really is a vamp, formed only to corrupt and destroy. Unfortunately, the ending denies her the kind of suspenseful, thrilling chase and climax that such a character deserves. That deflating, uninspired conclusion proves far more troubling than the missing women or any other problems with the picture, and it keeps Thirteen Women in the minor leagues as an example of its genre.

For another of Myrna Loy’s seductive vamps, see The Mask of Fu Manchu (1932), or catch her more famous performances in The Thin Man (1934), The Great Ziegfeld (1936), and The Best Years of Our Lives (1946). Irene Dunne earned five Oscar nominations for Best Actress over the course of her career, including nods for The Awful Truth (1937), Love Affair (1939), and I Remember Mama (1948). George Archainbaud directed for many Westerns and television series, including The Lone Ranger series starring Clayton Moore and Jay Silverheels.

You can currently see Thirteen Women on Warner Archive Instant.
Posted by Jennifer Garlen at 10:29 AM