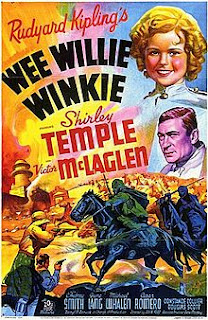 John Ford, best known as the director of masterful Westerns like Stagecoach (1939) and The Searchers (1956), seems an odd choice for a Shirley Temple feature, but the story that actually unfolds in Wee Willie Winkie (1937) plays on many of Ford's favorite themes. Darker and more mature than most of Temple's childhood movies, Wee Willie Winkie might not appeal to youngsters as much as some of her other films, but it makes worthwhile viewing for adult fans of either the director or the star.

Priscilla Williams (Temple) and her widowed mother, Joyce (June Lang), arrive in colonial India to live with Priscilla's grandfather, Colonel Williams (C. Aubrey Smith). Priscilla, nicknamed Private Winkie by the soldiers, befriends both the burly Sergeant MacDuff (Victor McLaglen) and the captured rebel leader, Khoda Khan (Cesar Romero), while her mother falls for a handsome lieutenant (Michael Whalen). A treacherous spy, however, helps Khoda Khan escape and puts Priscilla in the middle of a deadly confrontation between the British soldiers and the rebel troops.

The film's most important relationship is that developed between Priscilla and MacDuff, who proves far more paternal than any of the other men in the little girl's life. McLaglen gives his character tremendous appeal, and his death part way through the film highlights the adult nature of the story. If your children aren't ready for Bambi (1942), then they aren't ready for Wee Willie Winkie, either. Most Temple films build on a tragic backstory that is already in the heroine's past, but these offscreen events generally pass over the heads of young viewers without much observation. With the death of MacDuff, Ford brings the child protagonist's experience of loss right into the foreground, and, while it works beautifully, it left my resident junior film fan so traumatized that she almost refused to watch the rest of the picture.

The secondary plots fall short of this emotional power. The budding romance between Priscilla's mother and the lieutenant lacks heart, partly because Michael Whalen is awfully dull. It doesn't help that charismatic Cesar Romero is there as an unrealized alternative; a story in which Joyce fell in love with him might have been really interesting. Chinese actor Willie Fung makes an especially ridiculous and unpalatable traitor; he had appeared with Temple in Stowaway (1936), but nobody is going to believe he's Indian for a second, and his character seems to be something of a lunatic to boot.

An earlier version of this review originally appeared on Examiner.com. The author retains all rights to this content.
Posted by Jennifer Garlen at 9:30 PM