July 28, 2013, marks the 100th birthday of classic Fox star Laird Cregar, one of my favorite lesser-known actors and the protagonist of one of Hollywood's most tragic stories. Cregar had been pegged by the studio as a heavy because of his large size and his air of hedonistic debauchery, but the actor longed for leading man status and was willing to take drastic measures to show that he could fit the studio's image of a romantic lead. He dropped 100 pounds and presented himself in a very different light in his final film, Hangover Square (1945), but the strain of his physical transformation resulted in a fatal heart attack, and Cregar died before the picture was released. He was only 31 years old, with a brilliant career ahead of him, and had he lived Cregar might have proved a true rival to his friend, Vincent Price.

Here are a few of my favorite Cregar performances -

HEAVEN CAN WAIT (1943) - Cregar plays the Devil in this romantic comedy from Ernst Lubitsch. He doesn't have a lot of scenes with star Don Ameche, but he makes every one of them count, and Cregar's Devil is a jolly -  if slightly sinister - fellow, a laughing demon who doesn't really seem to wish his guest eternal damnation at all. 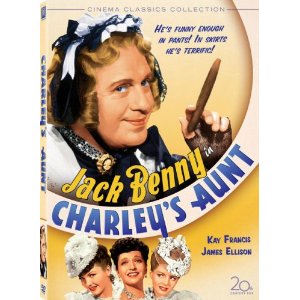 CHARLEY'S AUNT (1941) - With Jack Benny as the cross-dressing star, Cregar plays an older man who tries to court Benny in his widow's disguise. Ironically, Cregar's son in the movie, James Ellison, was actually three years older than Cregar!

BLOOD AND SAND (1941) - In this sweeping Spanish epic, Cregar plays a smug bullfight critic who can make or break careers with a wave of his pen. Cregar cuts Tyrone Power down as viciously as a gored bull, but the real threat to Ty's ambitious bullfighter is the seductive Rita Hayworth.

THE LODGER (1944) - Cregar takes on the Jack the Ripper role in this creepy thriller starring Merle Oberon and George Sanders. As dangerous as his killer is, Cregar invests him with a strange sympathy that fascinates both the audience and Oberon's heroine. HANGOVER SQUARE (1945) - Although he didn't live to see it, Cregar gives a tour de force performance in his final film, building on the pitiable monster created in THE LODGER. His transformation scenes from nice guy to killer require no makeup or special effects, just Cregar's own ability to show his protagonist crossing over to the dark side at the sound of a particular tone.

Cregar also makes memorable appearances in I WAKE UP SCREAMING (1941), THE BLACK SWAN (1942), and THIS GUN FOR HIRE (1942). Honor his memory and his passion for stardom by catching a few of his movies this week.
Posted by Jennifer Garlen at 12:40 PM