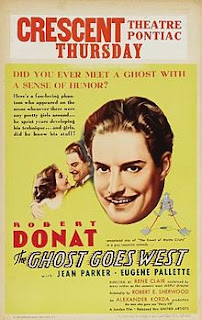 Like Oscar Wilde’s story, “The Canterville Ghost,” The Ghost Goes West (1935) offers us an old-fashioned ghost thrust into a modern world with comical results. The film proved a big hit in Britain, where it was made, perhaps because of its romantic view of Scotland and skeptical perspective on nouveau riche Americans, but modern audiences everywhere will plenty to enjoy in this charming fantasy. Directed by René Clair and produced by Alexander Korda, The Ghost Goes West is an excellent choice for those who enjoy light supernatural tales like Topper (1937), The Canterville Ghost (1944), and Blithe Spirit (1945).

Robert Donat stars as both the ghost, Murdoch Glourie, and his modern day kinsman, Donald. Murdoch has been doomed to haunt the family castle until he avenges an insult to the Glourie name, but cash-strapped Donald is forced to sell the place to a wealthy American family who upset Murdoch by moving the whole structure to Florida. Both Donald and Murdoch enjoy the company of lively Peggy (Jean Parker), who longs to see a ghost but can’t tell Donald and Murdoch apart, and both are vexed by the schemes of Peggy’s father (Eugene Pallette) and his rival (Ralph Bunker) to turn Glourie Castle into a marketing stunt.

Donat looks particularly handsome in Murdoch’s full Highland costume, and his scenes as the waggish ghost, both before and after his death, are some of his best moments in the film. Murdoch has a particular eye for the ladies, but Donald possesses less confidence than his spectral relation, especially when it comes to courting Peggy. Eugene Pallette has another blustering, gruff father to play, and as always he does it well, and the sight of him in a kilt, trying to stage a ghostly manifestation, is certainly good for a laugh. Classic film buffs will also enjoy seeing Elsa Lanchester, best known as the screaming Bride of Frankenstein in the 1935 film, in a supporting role as Miss Shepperton, even though she has little to do beyond rolling her marvelously expressive eyes at Eugene Pallette.

Beyond the ghost story and the romantic comedy, The Ghost Goes West is a narrative about authentic family heritage and modern fakery, with Scottish national identity as the contested ground. The first part of the film pokes fun at the Scottish insistence on clan membership beyond all other loyalties; the Glouries and the McLaggens would rather kill each other than kill their common enemies, the English. Murdoch is cursed not for failing as a soldier in the Jacobite Rebellion but for failing to settle the score against the rival clan. Donald, who has failed as the guardian of his birthright, literally sells out to the Americans, who then make a mockery of real Scottish culture by dressing up in kilts and staging bad imitations of Scottish traditions. Luckily for Murdoch, the farce presents him with a long-awaited opportunity to lift the curse and join his ancestors on the other side.

You can see The Ghost Goes West on Hulu Plus or Amazon Instant for $2.99.
Posted by Jennifer Garlen at 9:56 AM